A Bid Farewell to Senior Athletes 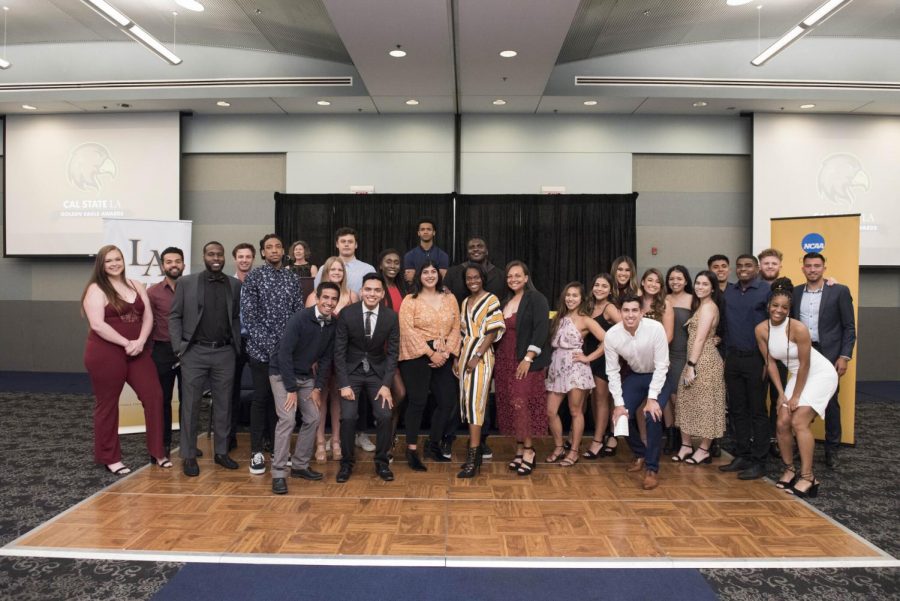 Cal State LA’s Division of Intercollegiate Athletics held their twelfth annual Student-Athletes Awards Banquet last Monday in the Golden Eagle Ballroom. It was not only an award show for the students athletes, but a final goodbye to the seniors who will be graduating next week.

Tim Klefisch of the men’s soccer team won the Frank J. Candida Award as the Male Athlete of the Year.

Valexsia Droughn of the women’s track and field team won the Billie Jean King Award for Female Athlete of the Year.

Sandy Kriezel, who will retire at the end of the season, was recognized at the banquet. The tennis head coach was also the winner of the PacWest Coach of the Year Award earlier this year.

Samuel Croucher of the men’s soccer team and Kenneth Cyprian of the men’s basketball team were both named the California Collegiate Athletic Association (CCAA) Championship Scholar-Athlete of the Year in their respective sports.

Peabody, along with Faith Baumgartner of the women’s soccer team, won the Academic Achievement awards.

The Dr. Hal Charnofsky Awards given out by the CCAA is an recognition for student athletes who have distinguished themselves in the classroom and in their sport. The winners were Jacob Silva of men’s track and field and Adriana Maldonado of women’s soccer and beach volleyball.

The winners for Freshmen of the Year were Porte-Joie Tshiaba of men’s track and field and Caleigh Clark of women’s golf.

Ja’Sean Lewis of the men’s basketball team and Droughn took home the Newcomers of the Year Award and Luciana Di Laura of women’s tennis received the Courage/Spirit Award.

Lastly, women’s volleyball head coach Juan Figueroa was named Coach of the Year while men’s soccer won team of the year for the second consecutive year.

The Cal State LA student athletes have racked up plenty of awards this season. This year, the Golden Eagles took home five All-America awards, 10 All-Region awards, 39 All-Conference awards, two individual CCAA championships and three conference Newcomer of the Year awards. With the spring awards not yet completed, the Golden Eagles could add more to this impressive total.

The 2018-19 season was filled with plenty of memorable moments kicking off with the men’s soccer team defending and repeating as CCAA tournament Champions and advancing to the second round of the National Collegiate Athletic Association (NCAA) Tournament, while the women’s soccer team advance to the CCAA playoffs for the sixth straight season.

The women’s volleyball team won the most games since 2009 and returned to the NCAA playoffs for the first time since 2010.

Men’s basketball finished with the most wins since 2000 and had a memorable CCAA playoff run, with two thrilling overtime games.

While each of these student athletes are recognized by their peers and the athletic department, the impact and contributions they have made to their respective programs and to the university will not be forgotten.