A Guide to Streaming Services

With new streaming services on the horizon, subscribers will have more options to choose from 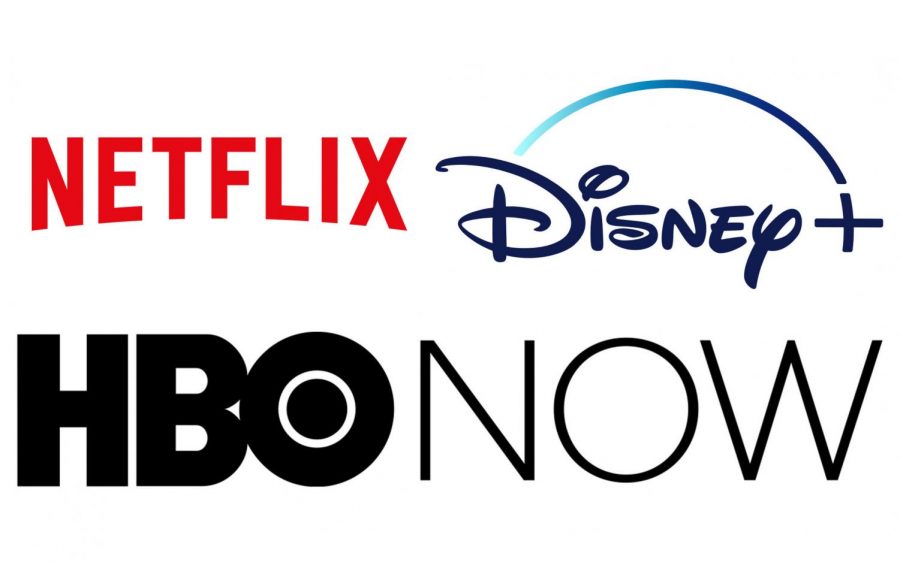 Netflix, Disney Plus, and HBO Now fight to make their streaming services more prominent by including popular shows and movies in order to gain more traction of their service. Netflix, Disney + and HBO Now logos compiled by Brian Delgado.

With the recent announcement that the shows “The Office” and “Friends” are leaving Netflix, news of new streaming services are on the horizon.

With so many services, viewers will ask themselves where they should spend their money. So, what is it that each one offers?

Netflix’s name is as big as it is thanks to a great range of shows they put out from “Stranger Things” to “Black Mirror.” Netflix has a constantly shifting library of movies and shows. All episodes for a show are available the moment it is ready to stream so viewers can watch at their pace.

There are two Hulu plans available with the only difference being if you want ads or not. For $5.99 a month, viewers have access to a library of over 85,000 television episodes and movies and can air episodes for shows the day after they air. HBO, Showtime and more premium channels can be added to your plan for an additional cost. If viewers do not want ads, they still get all that mentioned previously but for $11.99 a month.

Hulu relies on viewers watching currently airing shows on their service but they do offer their own original programming like “The Handmaid’s Tale” and “Castle Rock” which makes new episodes available every week.

For college students, subscribing to a Spotify student plan for $4.99 per month gives them not only Spotify Premium but Hulu with ads and a Showtime subscription.

Amazon Prime Video is available just on its own for $8.99 a month. There are original programs with “Jack Ryan” and “The Marvelous Mrs. Maisel” and even a large film library. Like Hulu, premium channels can be added for an additional cost.

Amazon Prime Video, however, still comes included in a full Amazon Prime subscription which also offers two-day free shipping, access to Amazon Music and special deals for $12.99 a month or $119 for a one-time fee annually.

College students can get an Amazon Prime subscription for $59 a year after their first free six months.

HBO Now offers the library that built the channel’s reputation. Shows like “The Sopranos,” “Sex and the City” and “Game of Thrones.” The service also includes an ever-changing collection of movies all for $14.99 a month.

CBS All Access is $5.99 a month or $9.99 without ads. Viewers get access to the CBS lineup and NFL games alongside new shows like “The Twilight Zone” reboot and “Star Trek: Discovery.” A new “Star Trek” show with Patrick Stewart returning as Captain Picard and an adaption of Stephen King’s “The Stand” is on its way.

DC Universe is definitely a niche service as an all DC app. For $7.99 a month or $74.99 for the year, DC Universe offers DC movies and shows, except for those made by The CW, all-in-one package. Included is a large library of comics available to read and original shows like “Titans” and “Doom Patrol” with more on the way. Not everything on the service is family friendly though as their new shows have been aimed for mature audiences.

While NBC Universal still has their plans under wraps for their streaming service, Disney and Warner Bros. are working hard to get their services ready.

Disney Plus will be the next big service to join the streaming landscape this year launching on Nov. 12. with an initial cost of $6.99 a month.

At launch, the service will offer almost all of Disney’s library except for its newest releases which will be available on later dates. Marvel Studios and Star Wars properties will also be included with brand new shows like “Loki” and a “Rogue One” prequel series starring Diego Luna.

The Disney-Fox merger has made it so Fox properties like “The Simpsons” will be there on day one. Disney Plus is even looking to make its own line of original shows and movies. “Monsters Inc.” will have a sequel series called “Monsters at Work,” a “High School Musical” series is planned and a live-action “Lady and the Tramp” will premiere on the service.

Warner Media will hit the scene with HBO Max in Spring of 2020 which will be separate from HBO Now. The service will have originals shows branded as Max Originals like the animated “Gremlins: Secret of the Mogwai” and a spinoff series coming from the upcoming film reboot of “Dune.”

Shows and movies from Warner Bros. catalog such as “Friends” and “Pretty Little Liars” will also be available. According to the Wall Street Journal, the service is looking to be around $16 or $17 a month.

Having all these services can build up the cost similar to a cable package if not largely exceed it which may be where subscribers will drop off. Each streaming service will have to prove their worth by their content much like it has taken Netflix to prove its own.

All these services are scratching the surface with what is on its way. It is no doubt viewers will find ways to get around all these services which may be as easy as sharing passwords with family and friends.