An Alternative to Campus Eats

A new healthy-food option is now being served on campus. 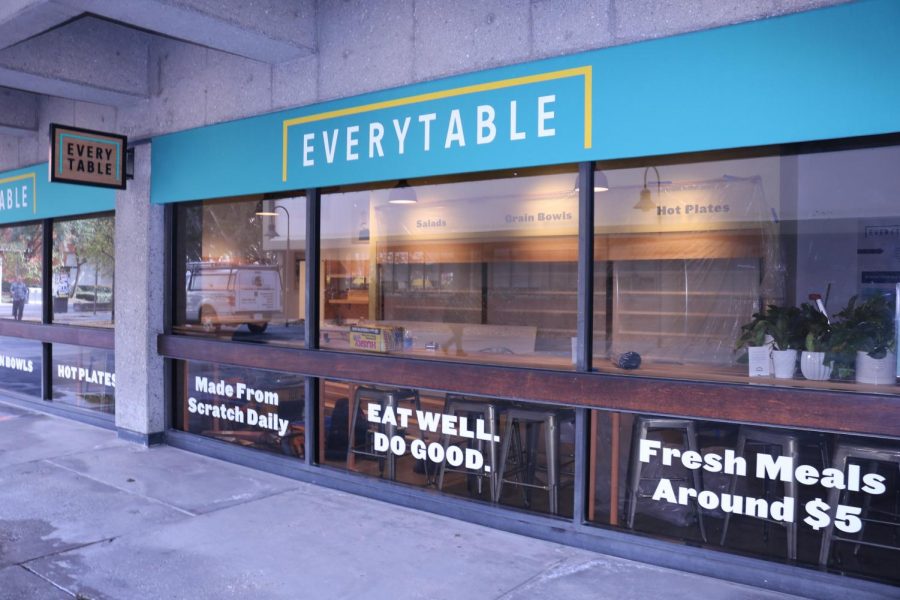 Outside view of Everytable. Photo by Joseph P. Pinto

As college students, there are only so many food choices that are available on campus. Most of the time it is a fast food chain that is often overpriced and not all nutritional. However, there is a new healthy and affordable alternative located in the Kennedy Library.

Everytable, which refers to their locations as storefronts, is a grab-and-go prepared meal service that provides produce-focused meals to the Cal State LA community starting at just five dollars. With produce coming from local farms around the Los Angeles area, the meals are prepared in a local kitchen located off campus, and then delivered to the storefront. It is because of this system that the company is able to keep its costs so low.

It’s menu is fitting for all dietary needs; specifically, it meets the needs of vegetarian and gluten-free customers with options like the Citrus Pecan Salad and the Autumn Grain Bowl. For vegans, options like Chipotle Chimichurri Salad or the Roasted Potato Soup are available. Otherwise, there are animal product options such as chicken for those who are looking for more protein. All ingredients and nutritional information are available on the Company’s website.

The company opened its first storefront in 2014 and has locations in food deserts which, according to their mission statement, are affluent areas that are considered underserved communities with little or no access to healthy food.

Specifically, the Cal State LA location opened during finals week last semester and has been a popular destination for students.

“Cal State LA was chosen as the first college due to the leadership of Jose Gomez and the president of the University because they resonated with the concept and they wanted to bring food that was both affordable and convenient to the students of Cal State Los Angeles,” said EveryTable CEO Sam Polk.

The money Everytable pays to lease the space in the library goes into a charitable fund that is distributed to student led initiatives that focus on food justice issues in the surrounding areas of the campus.

“It is a comprehensive charitable partnership that both brings great food, but also advances the charitable initiatives of the campus itself,” said Polk.

The success of the Cal State LA location has helped create the plan to open other storefronts at other Cal State campuses as well as UCLA and Cal Poly Pomona.

Due to the fact that Everytable utilizes premade meals with a grab-and-go method, the meals which are unsold are given to local nonprofits and homeless shelters in surrounding areas. With its seasonal menu and an upcoming pilot program that will include a breakfast menu for students to choose from, Everytable is off to a positive start at Cal State LA.

EveryTable will be open to the University community beginning Tuesday,  Jan. 22, and a Grand Opening celebration will take place on Monday, Jan. 28.