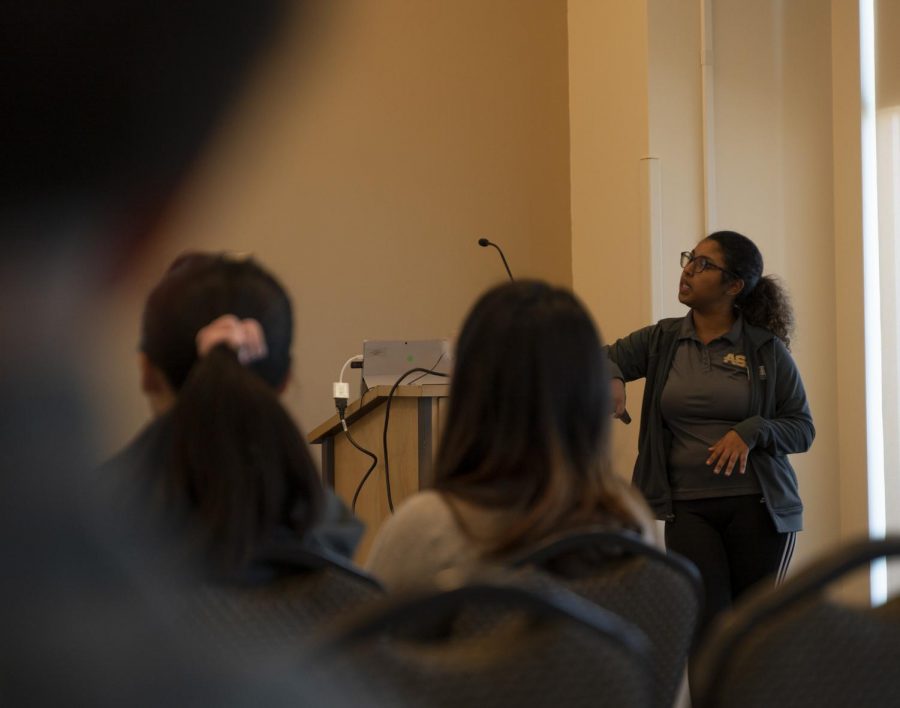 Wendy Romero, Elections and Outreach Commissioner, expresses the concern over Cal State LA’s budget handling over the past year.

As general elections approach this semester, Associated Students Inc. (ASI) encouraged students to join the student government through a series of workshops on campus.

Senior Coordinator of Student Engagement & Outreach Damarea Parker, who helped organize the Rock the Elections workshops late last month and on Feb. 4 said that the purpose of the event was “to inform students about the elections that are coming up and then also to gain folks who are interested, an opportunity to learn more about ASI.”

Regarding the election process, the event was meant to inform about “what positions are open and also how they can apply and start getting ready for campaign if they want to run for an elected position,” Parker added.

Some of the basic eligibility requirements to run for election include having a good standing with the university. Students cannot be on academic, disciplinary or administrative probation. Candidates must have a minimum 2.5 cumulative GPA during the last 12 months. They must be available for scheduled meetings and serve a minimum of two hours per week physically in the ASI office.

Another organizer was Wendy Romero, Elections and Outreach Commissioner, shared with the UT that ASI gave a more powerful presence to advocate for changes on campus.

Before joining ASI, Romero brought forth the issue of older buildings on campus in various meetings. In one of the Academic Senate meetings last year, she said she presented the issue to Present William Covino, but got no response. At the time she felt that it was “wrong that we’re spending more money on the new dorms when we could be investing that money in some of these old buildings that need a lot of repair and infrastructure and maintenance.”

She decided to be part of ASI and was elected to her current role where she is now presenting this issue at the Board of Directors meeting.

When asked about the older building matter, Robert Lopez, spokesperson for Cal State LA, clarified through an email that CSU revenue bonds are used to fund the new student housing projects.

This money “can only be used for housing projects and cannot be used to repair or upgrade any non-housing structures on campus,” Lopez explained. The revenue generated by housing is used to pay back the bonds invested in the housing project, he added.

Romero encourages students to join the student government because addressing the problem on “both sides of the fence,” as a student and as an ASI member, made her realize that her voice has a different impact.

“You do have a little more power with ASI because you are actually working with the administration, if things don’t go out with administration there’s always someone higher that you go up to,” Romero commented.

For Parker, working in ASI guarantees transferable skills that are very beneficial for the student including “how to manage a team, delegate, how to take initiative… how to write resolutions, how to work with other campus partners: administrators, faculty, and staff and students. And then, they’ll also be able to sharpen their speaking skills.”

Vina Li, a first-year marketing student, attended the event in search for ways to be more active on campus. She is looking forward to applying for the position of public relations and marketing commissioner to practice skills that will better equip her for her career.

“I really need to do some practical stuff to gain more experience for me to prepare myself for the workplace. For example, how to communicate with others,” Li shared.

Regarding issues she looks forward to resolving Li said, “I noticed for a long time that in Salazar Hall third floor the women’s bathroom the lock is broken for the whole semester and it hasn’t been fixed yet.”

Lopez said he has informed Facilities about the broken latch and it is now in the process of repair. He encourages students to contact Facilities if they see something that needs repair around campus.

Information about the process can be found on the following webpage: