ASI Votes No Confidence in Covino

Golden Eagle Justice Coalition and ASI collaborate to pass on the Resolution of No Confidence in Covino and other key administrators. 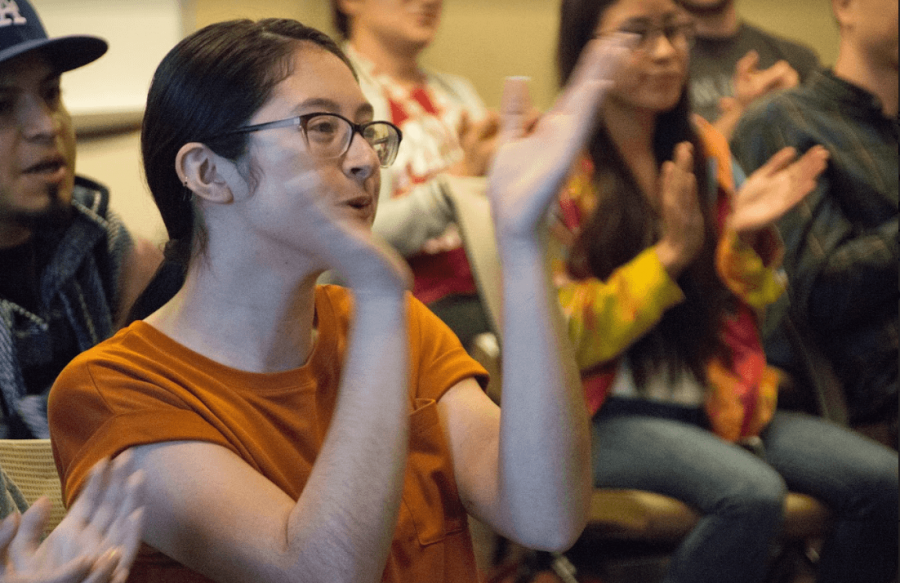 Danielle Mayan, member of the Golden Eagle Justice Coalition, celebrates the decision to approve the Resolution of No Confidence in President Covino at the end of the ASI special board meeting scheduled on Friday, March 29.

On the Friday before spring break, the Associated Students, Incorporated (ASI) held a special meeting to vote on a single action item on the agenda: the Resolution of No Confidence in President Covino.

The special meeting was scheduled for Friday, March 29, the day after the regular ASI Board meeting. It was arranged due to push-back from the Golden Eagle Justice Coalition when the ASI board voted to change the agenda item to a discussion item, during their meeting on Thursday.

After an hour-and-a-half of bartering between public comments and the board, Danielle Mayen, a Golden Eagle Justice Coalition member, suggested an immediate scheduling of the special meeting in order to keep the action item from being postponed by two weeks.

The suggestion was voted on by the board and approved. Executive Director of Communication and Public Affairs, Robert Lopez, reached out to the University Times (UT) with a comment from President William Covino on ASI’s final decision to schedule the special meeting during Thursday’s board meeting.

“I am puzzled as to why the vote was scheduled so hastily, without giving me and my leadership team the opportunity to meet with the ASI Board and answer questions,” Covino said in a statement.

The next day, both the ASI and the Golden Eagle Justice Coalition filled the board room ready to take on the agenda item at hand. ASI President Nia Johnson commenced the special meeting with a loud bang of the gavel.

This was Johnson’s first day back after a short period of absence. She expressed her concern to the UT over the board’s decision to postpone the resolution during their regular scheduled meeting the day before.

“We’ve had a lot more urgency about pushing through ASI initiatives such as an alternative spring break program, or discussing items about our budget, or our salaries for our staff,” she said. “But when it came to student advocacy, it was real disheartening and disappointing for me to see my board take that action when they’ve had urgency on things lesser so I wanted to make sure that we all remembered what we were here for; that we were elected to represent student voices.”

Members of the board claimed that the reason behind postponing the vote was because of the many amendments that needed to be made to the original resolution document. Vice President of Academic Governance, Jacquelyn Acosta, explained to the UT that she had worked through the night in order to have the amendments ready for Friday’s meeting.

“It wasn’t something I could vote on, so I wanted to make sure that if it’s going to be for the students, it has the best chance as possible; that it’s supported with facts and statements supported by the trustee level and other different levels.”

The ASI spent roughly two hours working with the public audience, which mainly consisted of Golden Eagle Justice members, to edit and amend the updated version of the resolution that would ultimately please both parties.

Despite minor pushback, the board and the public audience both agreed on the amended version of the resolution. With a majority vote, the action item passed and the room was cheers and applause.

“For a second I was scared and skeptical of whether or not they were going to vote in our favor… but they really pulled through and I commend them for that, but there’s a lot more work that needs to be done.”

President Johnson was happy to end the day on a positive note after hearing about the disarray the board meeting turned into the day before.

“This is all the work that we’ve been working towards this whole year. There were times when some of us didn’t know if this organization could really embody what we wanted it to be, which is an aspect to embody student voices. So, for that to happen now, is like seeing the silver lining of everything we’ve gone through.”

The Resolution of no confidence in President Covino will be placed on the Academic Senate agenda for their meeting scheduled for April 23, though their next meeting will take place today.