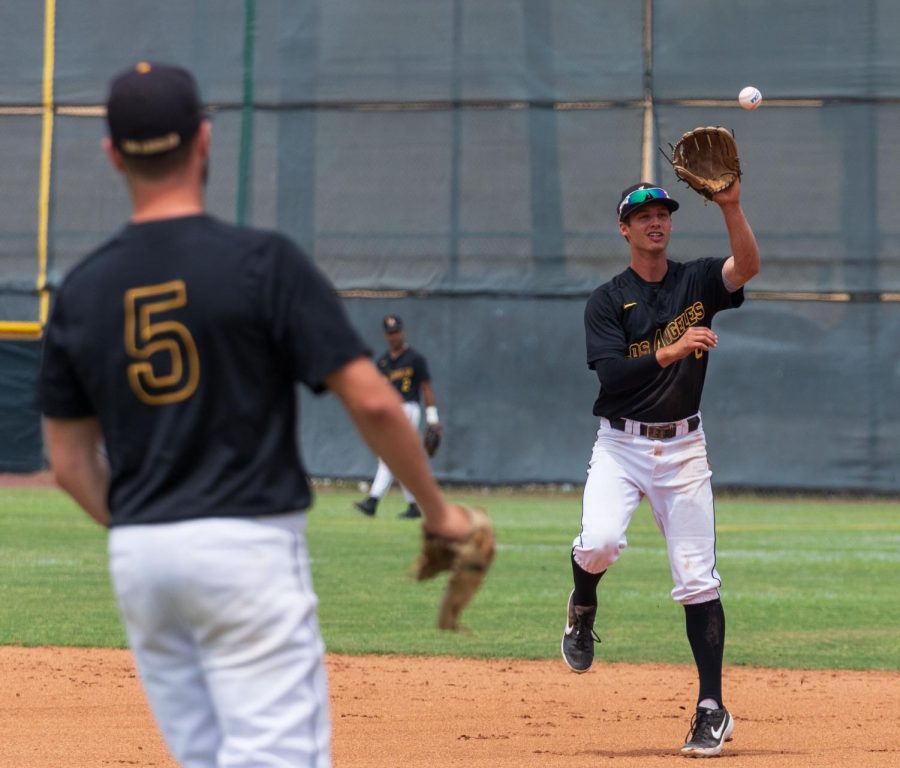 Second baseman Jordan Peabody (8) fields the ball and prepares to throw the runner out at first.

Austin Nazabal pitched for Cal State LA in the opener and went a season-high seven innings as he gave up six runs on eight hits.

Down 6-5 in the fifth inning, the Golden Eagles tied the game up on a sacrifice flyout, by center fielder Jordan Myrow, that scored first baseman Alec Daily.

The home squad scraped together four hits and one run in their half of the ninth inning, but it was not enough as they fell 9-7.

Squandered opportunities was the theme for the Golden Eagles in Game 1 as they combined for season-high 20 hits as a team but left 13 runners on base.

The Golden Eagles looked to bounce back with a Saturday doubleheader, but found themselves on the losing end of both games; 7-6 in the first and 15-9 in the second.

Nick Moisant got the starting nod as he went over six innings and gave up six runs (five earned). Moisant left the game in a 6-6 tie in the seventh inning after he was ejected for arguing a balk call.

Johnny Virgen came in for relief and gave up only two hits in nearly three innings of work. However, one of those hits was a go-ahead solo home run to left field, which gave the Pioneers a 7-6 lead.

The “Boys in Gold” were shutout in the final two innings and suffered their sixth one-run loss of the season.

In the seven-inning nightcap, the Golden Eagles sent Dylan Suppan to the mound as he pitched over three innings and allowed six runs (four earned) on four hits.

Julian Garcia relieved Suppan and did not record an out as he allowed four runs.

Matt Miao was the final pitcher for Cal State LA and he gave up five runs in last four innings.

After trailing 2-0, the “G.Es” scored three runs in the second, but the Pioneers exploded for nine unanswered runs to take a 11-3 lead.

Right fielder/first baseman Jesse Burke and left fielder Michael Tillman each crushed a two-run home run for Cal State LA. Burke’s shot in the fifth was his first as a Golden Eagles, while Tillman’s shot in the ninth was his fourth of the year.

The “Boys in Gold” managed to salvage the final game of the series and of the season, 12-6. Daily got the start on Senior Day and pitched three innings and allowed one run on two hits.

Right fielder Adam Gordon got his team on the board early with a two-run blast in the first, and left fielder Spencer Sundahl followed suit with a homer of his own in the second.

Going into the sixth, the “G.Es” trailed 6-5 but tied the game off Grande’s RBI (run batted in) double. Second baseman Jordan Peabody’s 2-run RBI single put Cal State LA on top, 8-6. The Golden Eagles added four more runs for good measure as they avoided the sweep for their final win of the season.

Even though he’s losing his seniors, Golden Eagles head coach Vince Beringhele looks ahead to the future for the Cal State LA baseball program.

“Hopefully we can gather more depth next season and have more [pitching] and not have [an injury prone year like we had in 2019],” said Beringhele.

The Golden Eagles finished their season 19-26 overall and posted a conference record of 18-23. Unfortunately for Cal State LA, they will miss the playoffs for the first time since 2016.

Despite missing the playoffs, the Golden Eagles ended their 2019 season on a high note, with a win for their fans and seniors. As Cal State LA’s offseason begins, the “Black and Gold” crew will return to action in 2020.