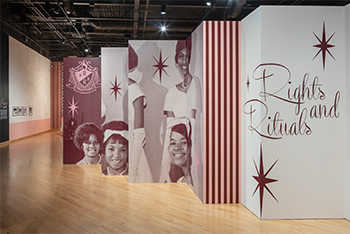 In fall 1961, Nat King Cole’s daughter, Carole, debuted with 27 other young Black women at the Beverly Hilton Hotel in the presence of prominent politicians at the time, President John F. Kennedy and California Governor Pat Brown.

That was likely the moment some Angelenos came to understand the importance of Black debutante culture.

Over time, that understanding has been lost.

To honor Black History Month, the California African American Museum in Los Angeles has captured this era and culture in an exhibit that runs until tomorrow, “Rights and Rituals: The making of African American Debutante Culture.”

Debutante Culture originated in Europe in the 18th century but “the earliest record of an African American social organization holding a ball is 1895 with the Original Illinois Club in New Orleans,” according to information in the exhibit.

The purpose of Black debutante culture was to uplift the race by breaking down stereotypes of what black women of that time period were expected to look, act, speak and think like. Black women’s volunteer service and social organizations such as The Links, Inc., the Questionettes, and the 20th Century Onyx Club all emphasized the importance of educating black women and promoting high-society culture and debutante culture, specifically, by holding cotillions and debutante balls.

“During enslavement, those things were denied not just to women, but to men. Lack of education is kind of like a form of power and control because the less you know, the more you’re able to be manipulated by those who do, or those who are in power,” said Taylor Bythewood-Porter, the assistant curator at the museum who has worked there since 2017.

Black debutante culture challenged European beauty standards as well as enslavement stereotypes such as the “Mammy” or “Jezebel” and showed that black girls could be both “beautiful and innocent,” according to the exhibit.

The representation of poised black women encouraged racial advancement by changing the dominant narrative. These cotillions also displayed an “alternative” black family. The father-daughter dance showed present black fathers who were able to provide for their daughters and families. The ability to afford debutante dresses and other cotillion expenses showed a status of middle-class wealth or higher.

Organizations such as the Los Angeles chapter of The Links contributed to charitable causes such as the American Association of Retired People, the NAACP,  the Los Angeles County Conference on Human Relations, local women’s shelters, and more recently, Black Lives Matter, according to the museum exhibit.

They even require their “cotillionettes” to take part in community service.

“There is this understanding, that not everybody has these types of luxuries or benefits. So to be able to reinvest it within their own community, within the Black community, especially… to be able to give somebody else the opportunity is just really important,” Bythewood-Porter said.

Bythewood-Porter stated that her research and work on this exhibition has filled her with so much pride as a black woman herself, it inspired her to go back to school to get her certificate in women and gender studies.

“It’s more than just lovely ladies and beautiful dresses. It’s about these strong, powerful women just getting out there and holding space for themselves.”

According to Bythewood-Porter, due to Covid, organizations such as The Links currently hold these cotillions virtually, and they are still quite popular.

There are a number of differences between the 19th-century Black debutante culture compared to the 21st-century one. For instance, it’s now more about building community and it can be considered a “rite of passage” much like a Sweet 16.

“I don’t think it’s so much about really thinking about racial pride and elevation in that kind of way, as much as it was in the 1800s,” Bythewood-Porter said. “I think that with these organizations now it’s like networking. It’s about going to school and it’s really a celebration of Black excellence and family.”