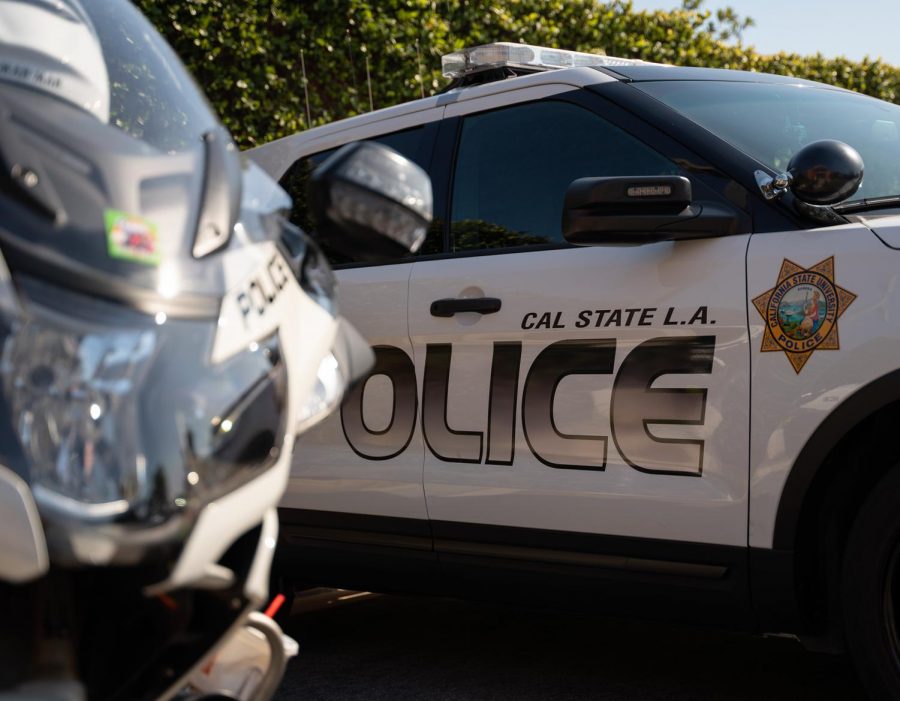 A police motorcycle and a vehicle parked at the Public Safety lot.

As she follows news of violence by police around the country, recent Cal State LA graduate Salma Lopez is torn about her major and career path: criminal justice.

“I just got my bachelor’s in criminal justice this year and it has crossed my mind whether I even want to be part of a law enforcement agency anymore,” said Lopez, “All of the corruption that is shown on television makes me feel like not even being part of that.”

In the wake of the global protests against police brutality, misconduct and corruption, many Cal State L.A. criminal justice students and recent grads have expressed mixed feelings about their career choice. Some are calling for more diversity within police agencies and better training and others agree with calls to reduce or divert police funding.

For instance, Lopez is ambivalent about defunding the police and opposes abolishing law enforcement agencies because she worries crime rates could rise and many would lose their jobs. However, she said she feels reducing law enforcement funding could demonstrate to officers that they “cannot abuse their power.”

“Police don’t need to be militarized”

Another recent Cal State LA graduate, Sandra Huerta, a supporter of the Black Lives Matter Movement, said her social media feeds showed how officers escalated tensions at peaceful protests and how demonstrators were mistreated at the hands of police

“It’s evident that Black people are unjustly targeted by police, courts and corrections and the criminal justice system is meant to incarcerate them,” Huerta said.

On the issue of defunding the piece, Huerta, along with most of the students interviewed for this piece, agreed that police budgets can be cut.

“Police don’t need to be militarized and have the latest equipment or vehicles,” Huerta said. “That money should be invested in lower income communities, in schools, in children’s education. The main problem with police is that they are being called for every single situation instead of just emergencies.”

Currently, she is pursuing a career in the military but at one point during her college career she contemplated joining the L.A. County Sheriff’s Department or thr Los Angeles Police Department. She said her classes, along with recent news coverage, have changed her perspective on law enforcement.

“I used to see police as heroes, and they are all great men and women, but now I feel like I’m [on] neutral ground,” Huerta said. “I don’t idolize the cops but I don’t have hatred for them. I simply look at the facts and build my opinion from there.”

Recent graduate Esmeralda Mercado said getting rid of police would put low income residents that can’t afford private security at risk. But, she says law enforcement funds can be shifted to social services, like mental health and education.

“I believe that holding bad cops accountable, reforming the system, and raising recruitment standards higher can be the first steps in placing trust back into the people,” said Mercado.

Mercado plans on pursuing a career as a paralegal but still supports students pursuing careers in law enforcement.

“I greatly encourage those students that want to pursue it to do it because it was through this major where I learned the importance of de-escalation, mental health, and ethical values for law enforcement that are so necessary to place trust back into the community,” said Mercado.

Rubye Anis, a criminal justice major at Cal State Fullerton, has been “religiously” following coverage of the protests and law enforcement’s handling of them.

“It’s appalling, but at the same time, interesting to see how officers are acting during this time and how so many are so easy to succumb to pressure and have this ‘us versus them’ mentality when it comes to the communities they ought to be serving,” said Anis, who also supports the Black Lives Matter Movement and defunding the police.

“Individuals of color, especially black individuals, have suffered for far too long at the hands of systemic racism,” she added.

Anis opposes abolishing the police but believes the system has failed. “Instead of creating an entirely new system, I believe it’s important to recognize, address, and fix the issues existing within the one we currently have. With that said, I’m always willing to learn and my stance on anything is never completely stagnant,” said Anis.

She is currently working to complete her minor in psychology but her dream remains to be a crime scene investigator or a FBI special agent.

Anis said police reforms need to be significant to fix the present system: “I believe wide-scale reform has to be done in order to have an efficient police system whose job is to serve the community, not be alienated from it.”

“The neighborhood that I live in is relatively safe due to the relationship the community has with law enforcement and vice versa,” said Mendoza, who lives in Glendale. “These officers utilize social media to promote community engagement and organize public events with the community.”

He added that he feels people must take action if they want to see real change: “Volunteer in community services, attend city council meetings, or even [better] yet, join the police academy.”

A version of this story first ran in the Eastsider LA.