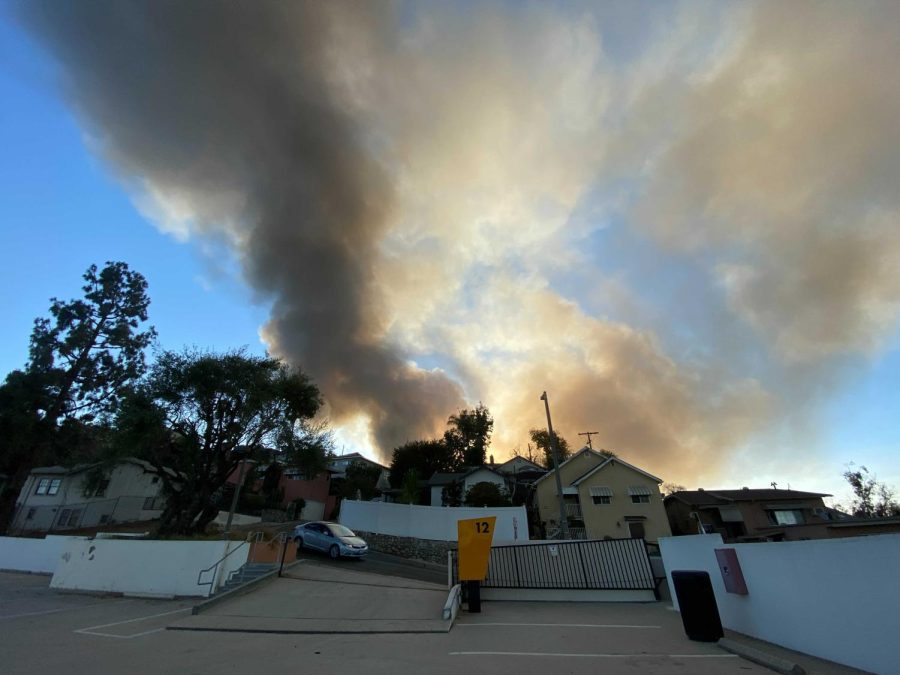 Students on campus were surprised to see a cloud of smoke caused by the “Alhambra Fire” that has now escalated to Major Emergency status. No injuries have been reported, and no evacuations have been ordered.

“I think the smoke is really bad for us right now because I typically have asthma on a bad day and with the smoke, it is not good for me or my lungs especially while wearing a mask, so I am hoping they stop the fire,”  said Ari Dieguez, pre-nursing major, living in the dorms.

The fire is less than a mile away from the Television, Film and Media (TVF) center and around 5:30 p.m, there were reports of three helicopters in the sky and sounds of sirens in the distance.

The smell of smoke was reported by students near the TVF center. Although there was no safety alert calling for an evacuation, students in the TVF center were urged to leave by a professor.

Eduardo Ramirez, a bystander coming from Alhambra on the bus, heard that “it might have been a furniture store” that is on fire.

According to a Los Angeles Fire Department (LAFD) alert, the building is a large one-story building with a” fire through the roof.”

Police have now blocked the area of the fire and the University sent out a safety alert to students around 6:30 p.m, reading “Cal State LA Safety Advisory: LAFD on scene of structure fire at Alhambra Ave & Valley Blvd. Avoid area. Campus is safe.”

According to the LAFD, the structure on that caught fire was a warehouse that once served as a roller rink  After the fire was put out, two firefighters were left injured.

Updated Oct. 5 with the aftermath of the fire and details on the affected structure.