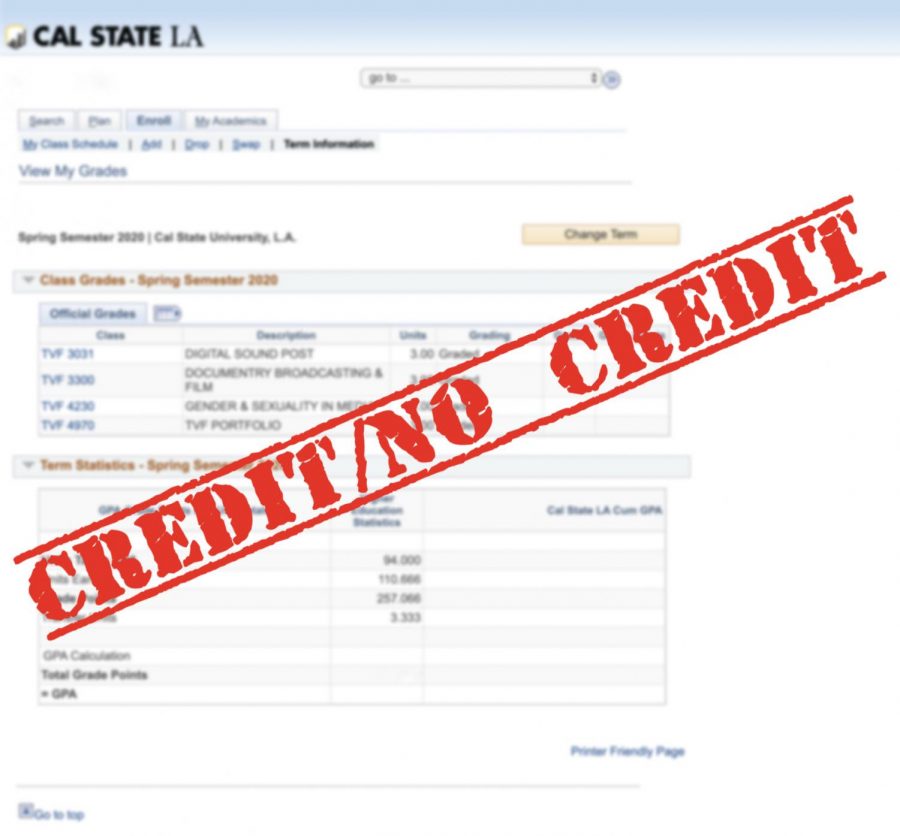 Cal State LA students can breathe a sigh of relief as the campus made the decision to give students the choice to be graded on a “credit/no credit” basis for the spring 2020 semester.

Undergraduates and graduate students have until May 9 to change to the new grading system. The decision came after the UT reported on students who had been struggling with the university’s switch to alternative classes.

The change applies to all general education, major and elective courses. Anyone who prefers to stick with a letter grade and receives an “F” grade will have it automatically changed to “no credit;” it will not reflect on the student’s GPA.

Graduate students will receive “no credit” for the class if the grade is a “B-“ or lower if they elect to take the “credit/no credit” option.

If students are looking to withdraw from classes, the deadline has also been extended to May 9 at midnight. The change goes for all students: undergraduate, graduate and credential. Only an electronically signed withdrawal petition will be needed.

Cal State LA students looking to change grading or withdraw from classes can find all forms at the University Registrar website.

In the university-wide email sent by the deans of undergraduate and graduate studies, Michelle Hawley and Karin Brown, respectively, suggested for some students to keep the letter grade basis.

“It may be best for most students to keep the traditional letter grade, especially since all ‘F’ grades will be automatically converted to a ‘no credit’ grade. Students in many programs, including those that lead to credentials, licensures, and graduate degrees, may be best served by traditional grading,” Hawley and Brown wrote in the email.

Prior to the announcement, four students started a petition when classes switched to online. The petition called for the school’s administration to end the spring 2020 semester early and allow all students “to pass our classes” due to the stress that comes with the coronavirus and the aftermath of the university’s COVID-19-related mandates.

The founders had hoped school officials would consider options that include but are not limited to either ending the semester outright and giving all students a passing grade or ending with the grades that students had before the transition to online occurred.

Campus spokesperson, Robert Lopez, confirmed in an email that the semester will continue as usual. He referred to the campus-wide email that said the new grading system was put in place to “[lessen] the impact of COVID-19 on our students.”

One of the four founders of the petition, Cristina Zetino, who identifies as a “couch surfer,” said she and her fellow student assistants at Cal State LA’s Anna Bing Arnold Children’s Center, were asked to file for unemployment. After, she felt the need to advocate for those who were under pressure due to tension caused by the pandemic.

“There should be something done between the institution and the students as an act of kindness and an act of good faith,” the senior had said before the university’s recent decision.

In 2016, Zetino’s family lost their home which forced her to take refuge at friends’ and families’ houses while she started classes at Cal State LA. The first generation student’s end goal is to graduate with a double major in child development and psychology.

Enrolled in six units, she was ready to take on the last semester of her college career, until the university transitioned to online-only classes in response to the outbreak. For students like Zetino, the transition was anything but smooth.

“As a couch surfer, everywhere I go is a little bit different. I am lucky enough to have Wi-Fi in two out of the three places that I stay at but it doesn’t necessarily mean it will be quiet and that I [can] sit and focus,” Zetino said. “I can’t tell people in their own home ‘Hey, be quiet because I need to take this class’ or ‘I need to take this test.’”

She connected with three other students on social media that related to her concerns. They all felt a need for action to support the Cal State LA student community. The four students founded a petition that sparked both inspiration and controversy and went viral within the campus community.

After posting and sharing the petition, Zetino said the feedback wasn’t always positive. “A lot of the backlash that I got was [people] saying that we’re lazy, that we’re just trying to get a free ride, and it’s not a free ride. A lot of us took out loans or used money that we worked hard for to pay to get an education,” she said.

The petition exceeded its original goal of 2,500 and now has over 5,000 signatures of people vowing to support their proposal. Zetino said that the founding four students had hoped to submit the petition to the university’s administration and ask them to consider their proposal prior to the novel announcement.

Though the new grading system presents students with more options of how to address the remainder of their semester, Zetino said she recognized some questions that go unanswered.

“If a student was to get a ‘no credit,’ because of [a] situation, knowing they were already half way through the semester, would they have to then enroll and pay those units to take it again in the fall?” Zetino asked.

In the grade options email, Hawley and Brown advised students to speak to an academic advisor before making the grade system change.

Zetino’s classmate, Criz Torres, echoed the need for understanding during this abnormal semester due to the lack of hands-on and visual learning in some online classes.

“I’m a visual learner. It’s really hard for me to keep up with all my classes,” the psychology major said. “I tried [online classes] once in my life, and I failed… So, me, personally, I’m concerned. Especially since a lot of these professors have never taught an online class.”

Torres said despite checking Canvas and communicating with his classmates, navigating online classes has been confusing and hard to keep up with.

Outside of the classroom, Torres is considered the “head of household” as he takes care of his three younger siblings and his mother.

“[My mom] doesn’t know how to drive,” Torres explained. “She’s very dependent on me. I have to drive her to four places so that she can find something as simple as eggs.”

Torres said that his duties as the head of the house don’t stop there. His siblings who are students within LAUSD consistently look to him for help with their homework, which keeps him from focusing on his own studies.

“I’m really concerned. I’m not sure how this is going to go. I had A’s and B’s [the week before last] and I’m afraid my grade is going to go lower.” Torres continued, “I was doing so well that I was hoping to get straight A’s this semester.”

In response to the petition, Lopez expressed that the university is concerned about students and wants to make sure they are safe and healthy while continuing their education.

He listed resources Cal State LA is offering for students during this time such as a limited number of laptops students can check out and emergency grants they can apply for to help with purchases such as food, housing and technology.

As the semester continues, so do Zetino’s concerns. Despite the spring semester’s “credit/no credit” option, she is concerned for students with fewer resources.

“I think education is important, but there’s a time and a place,” Zetino said. “This may not be the time, and at home, might not be the best place for everyone.”