Businesses and homeowners helped by millions in federal housing funds

Some residents wonder why there isn’t more assistance for renters 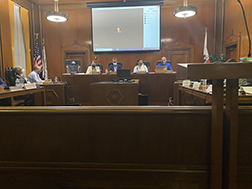 What has the city South Gate done with its nearly $6 million in funding from the federal Department of Housing and Urban Development in the past year or so?

That was the subject of part of a council meeting earlier this fall.

According to a city report, more than 40% of the nearly $4.3 billion that had been allocated so far was for several programs benefiting local businesses and job creation. Another 40% was to help homeowners rehabilitate their property. Much smaller portions, less than 4%, would help with fair housing or public infrastructure or facility initiatives. And about 10% was set aside for administrative costs such as city hiring.

“It’s every year, we have to do this, and basically, it summarizes what we’ve done the last year, where we spent the money and so forth, and how many people we serve,” South Gate Mayor Al Rios said.

The federal funds include money from the Community Development Block Grant. “The Federal government gives us what’s known as CDBG money that is allocated based on the federal taxes that the residents in the community pay,” Council Member Gil Hurtado said.

HOME funds from the U.S. Department of Housing and Urban Development (HUD) help produce housing for low-income folks. The city looks to maximize the impact of the money by partnering with local eligible agencies interested in becoming a Community Housing Development Organization (CHDO). This nonprofit group develops affordable housing in a community.

Rio said some expenses for “infrastructure and public facility” improvements have gone to cleaning graffiti: “ A lot of people like it, but it takes away from that money that could go to help other areas.”

Hurtado echoed that: “We could do much better things with that money. But because we have to clean up the graffiti, it’s forcing us to spend that money in that direction.”

About $1.7 million had been allocated to the homeowner grant category. This money is for residents requesting loans to help fix their homes, including rooftops, water systems, and indoor repairs. The loans range from $20,000 to $65,000 with 0% interest, according to the city’s Home Improvement Program.

Rios said city leaders figure that could help make residents’ lives a bit easier when working and paying for their homes.

He added that improvements to existing structures in the city are a small piece of what South Gate leaders have in the works. Other plans include drawing new businesses and establishing a cultural arts center in town.

Still, some residents question why so little had been allocated for local renters, especially considering many renters cannot afford to purchase their own home and only 43% of the city’s housing stock is made up of owner-occupied units according to the US Census Bureau.

Carlos Garcia, who rents in South Gate, sells insurance and works as a teacher for the Los Angeles Unified School District, said it would be nice to see more HUD funds allocated to renters.

Since Garcia works multiple jobs, he can handle his rental payments but knows that isn’t the case for everyone.

“Most people living in South Gate are renters in the newer generation…They’ll need more help adjusting from living with their parents to living with themselves,” Garcia said. “I know that many people are struggling, especially with inflation in houses or apartments…They would need that money.”

Rios, the mayor, said the city wants to help both renters and homeowners while also focusing on commercial development.

Rios agreed that renters need help: “Inflation and growth in the economy are some of the reasons why prices are going up and making residents struggle to pay rent.”

The mayor and city council are working on ways to help renters get the assistance they need to pay rent and stay afloat.

“We’re going to hire a few people that can help folks with rental assistance, those that are struggling to pay their rent,” Rios said. “At least give them some guidance, so that they could get the forms and get the assistance they need.”

After all, keeping renters in South Gate could help the city with other goals such as keeping a strong tax base and customers for new businesses being recruited.