Buying holiday outfits to snacking on popcorn: Eastside residents share their memories of Sears ahead of its closing 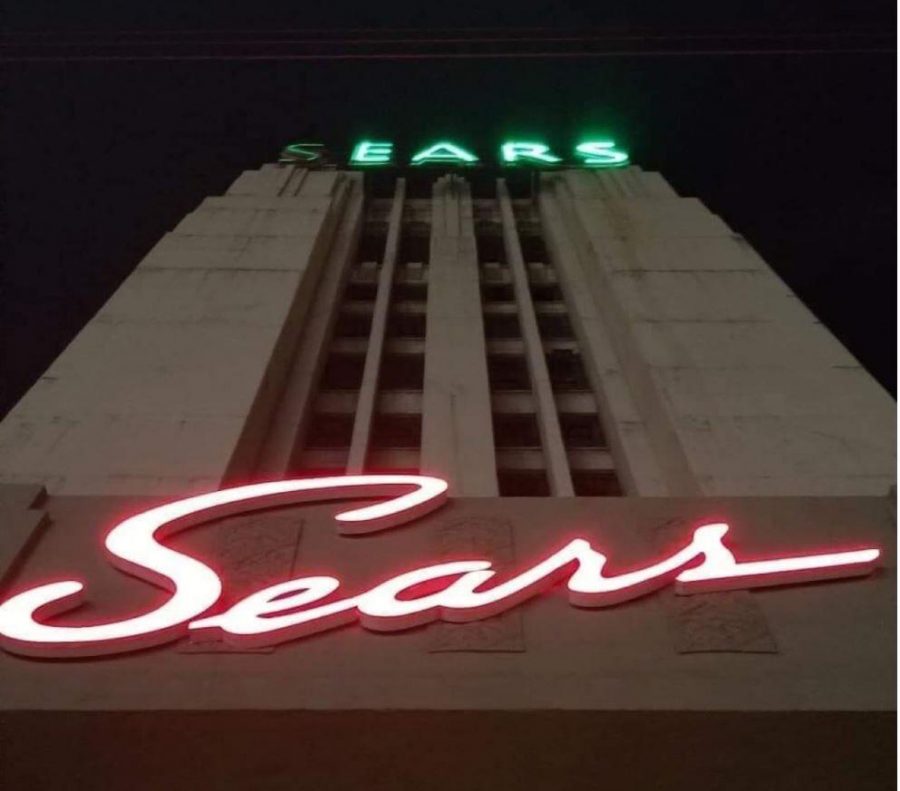 The neon signs of the Boyle Heights Sears store, which closed recently after 90 years. Photo courtesy of Bryan Montero.

Arline Hernandez, 73, said the Sears store at Olympic Boulevard and Soto Street has long been a symbol of home, its green neon rooftop sign visible for miles around.

“As little kids we would always say, ‘When are we going to get home? Are we there yet?’ And when we would see the green letters, ‘Sears,’ we would know we are almost home,” Hernandez said in a phone interview.

The historic Sears store is set to close by the middle of next month after more than 80 years, according to employees. TransformCo, Sears’ parent company, could not be reached for comment despite emails and a phone call.

During its final days, former and current Eastside residents shared their memories  — everything from being greeted by the aromas of popcorn and chocolate  to landing their first job — of the Boyle Heights Sears.

Vivian Escalante, who grew up in Boyle Heights and attended Roosevelt High School, said going to Sears was often a special occasion, especially around the holidays.

“We’d get the Easter outfits, my Christmas outfits and then we’d go to Clifton’s to eat,” she said. “Going shopping was about my mother, my grandmother getting dressed up. It was to the nines with their daywear and I always had my little outfits on as well…That was the way life was at the time. It was very stylish.”

Escalante, who is the founder and CEO of Boyle Heights Community Partners,  said Sears is like a “mega Amazon” long before the online retailer ever came to be.

Sears had “the best mail distribution plus it was a department store. Sears was ahead of its time,” she said.

The Sears building, initially completed in 1927, took 171 days to construct and reflects the designs of well-known architects Eliel Saarinen and Bertram Goodhue.The building represents how Sears wanted to be seen: both classic and practical.

“Sears wanted to present itself as a corporation that produced inexpensive and quality goods while it also buttressed its image through the creation of architecturally impressive buildings across the United States,” according to information the Boyle Heights Community Partners group received from the U.S. Department of the Interior’s National Register of Historic Places Registration.

The Sears building is considered historically significant because of “the importance of the mail order business in California,” especially in the earlier part of the 20th century, according to the California Office of Historic Preservation.

Childhood memories made at Sears

Bryan Montero, who takes photos of the store for a retail Facebook group that he administers, said watching stores like Sears close  is like “losing more of your childhood as you go.”

Montero recalled going to Sears with his grandparents as a kid, then growing up and driving down to the store himself.

He got his first guitar, the Sears Wing Ding, from the shop when he was 9 years old.

“That little guitar started me off with more guitars and I still play and write to this day on my guitar. I believe I still may have the song book that came with that guitar,” Lopez wrote in a Facebook Messenger interview. “My dad was a truck driver for that particular Sears so he had discounts that came in handy for a family with five siblings …We would get our school clothes and shoes, mostly from that store.”

Lourdes Ochoa-Marquez shared her fondest memories: “This is where my papi would take us to buy new clothes during the holiday season. It was also the best place to stand outside of and sell your school chocolate! But the ice cream stand outside was always my favorite.”

Other local residents who shared their memories include:

The place to shop

Terry Reyna said Sears “was the place to shop when I was growing up. You could get everything from underwear to washing machines and the famous Craftsman tools. My brother wore their Toughskins jeans.”

Vera Del Pozo said she shopped “at the furniture outlet…and also [at] the outlet downstairs” and she “always visited the ice cream-popcorn stand out front. Many memories!”

Roosevelt High grad Jose de Jesús Legaspi-Frias credits Sears for helping him establish his credit history: “I went to Sears on Olympic and I got a credit card. That was my start of credit worthiness so I could buy a car. The rest is history.”

Sears as a place to work and shop

Pamela Ponder Marquez said Sears was important to the local economy: “Sears hired locals from the community, and gave many youngsters and young adults their first job opportunities. Many family members worked there, including my husband, sister and two brothers-in-law, one of which had a very successful career there.”

This story was cross-published March 25 on TheEastsiderLA.com. UT Community News covers public issues on the Eastside and South L.A.