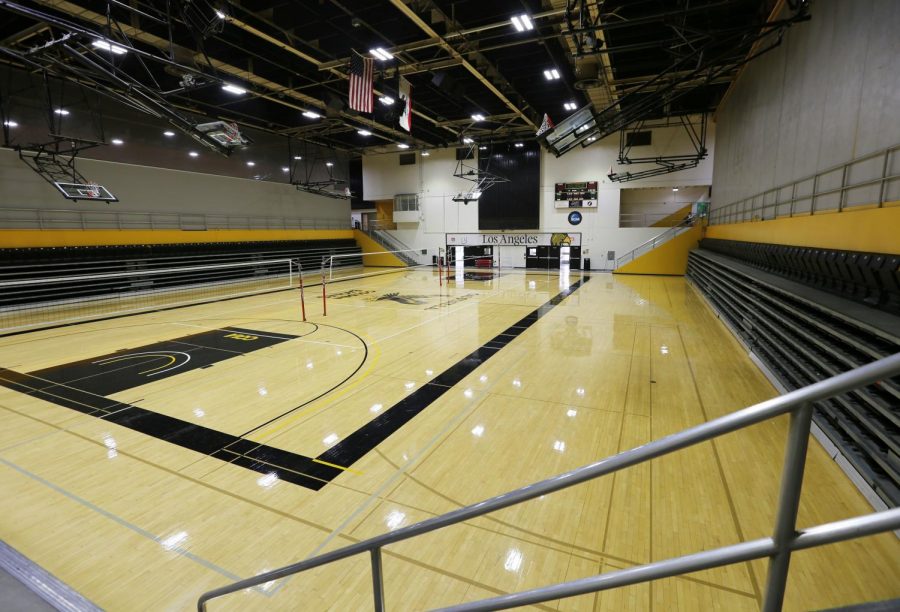 With no update on whether sports will resume for the Fall Semester of 2021, athletes and coaching staff continue to prepare and train in the hopes they’ll be back on the field and courts.

The coaching staff has been staying in contact with their athletes virtually, offering them workout ideas and support.

Jim Saia, head coach of men’s basketball, said he did not instruct any workouts to his athletes but advised them to do whatever they could, safely following COVID-19 guidelines.

Student-athletes have been continuing to work out to stay healthy and ready to go when sports can resume.

Adrease Jackson, a junior in the men’s basketball team, has been trying to stay as positive as possible and keeping himself healthy. With the gyms closed due to COVID-19, Jackson still works out at least six times a week. When he gets the chance, he heads to his old school’s outdoor basketball courts to play basketball.

Aside from working out, Jackson also emphasized how important it is to have a healthy diet.“I make sure I’m not eating too fatty foods,” he said. “I also make sure that I’m consuming enough calories of protein per day to where I am staying in tip-top shape.”

The athlete also said that the team would follow any safety protocols that would be placed because they want to continue playing.

“I really do think that everybody that does come back will take it 100% seriously because we took it for granted — us not being on campus,” said Jackson.

Another redshirt junior in the men’s basketball team, Alex Sokol, has also been keeping in shape and staying healthy as well. Sokol said he works out four to five days a week since he lives close to an open gym that follows the safety protocols. He lifts weights and plays basketball on the court.

Sokol added that when he wants to play basketball against other people, he heads to his home in San Jose and joins his trainer, along with a small group of people he trains with.

Aside from that, he said he keeps himself healthy by also getting eight hours of sleep and eating as healthy as he can. When he is not working out, he enjoys playing golf and tennis, which are two sports that he has been more involved with during the pandemic.

He’s also had time to catch up with movies, which is something that he was not able to do before when he had a busy schedule.

Sokol mentioned that whatever protocols are put in place, whether that be being “tested every week” or being “confined in a bubble,” he would follow them because he is ready to play.

Tina Fernandes, coach of the men’s and women’s track and field and cross country, mentioned how the student-athletes support one another and follow something they call “cover your mate.” The phrase essentially meant that teammates look out for one another and make sure they are doing okay during these unprecedented times.

Third-year cross country and track and field athlete Belen Vargas has been trying to maintain a healthy lifestyle. She said that she has been working out when she can, like going jogging and doing cardio workouts.

Vargas added she follows a healthy diet that consists of vegan food, fruits and protein shakes. When she is not worrying about school or sports, she works as a dog-sitter and spends the rest of her time with her new pet parakeet.

Many of the sports teams, like track and field, are hoping to resume playing in the fall semester of 2021.

Coach Fernandes said if they’re allowed to play next year, she and the team captains have come up with a pledge to practice “ safety for not only them, [but for] the coaches [and] the staff at Cal State LA.” She added that they have to practice safety for “other students or faculty that may be there, and our community as well as our household.”

The head coach of the men’s soccer team, Chris Chamides, said that he and his team have weekly Zoom meetings to check in with them. Their conversations involve checking in with their social and mental well beings, as well as academics.

The team also keeps in mind goals as they “then [lay] out some avenues for them to pursue.” them.

Aside from providing support for their athletes, they are also encouraging them to keep training and working out if they can do so safely.

Chamides mentioned there are different parties involved like the athletic department, the university, the conference and the NCAA that would have to come together to decide what safety protocols would be put in place if sports are allowed to resume next year.

One thing is for certain, when sports do return, the sports teams will be prepared.