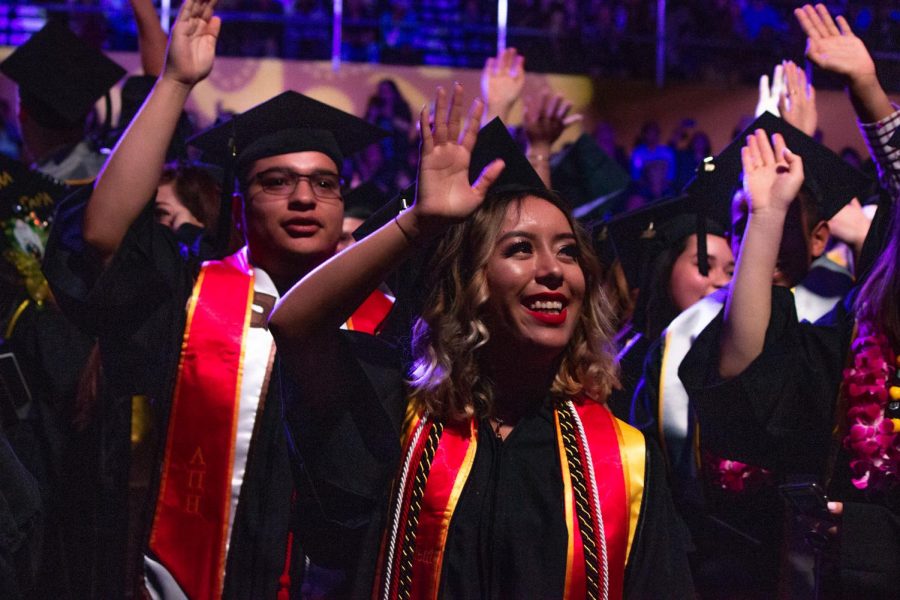 Alejandra Illingworth, a 2021 communication disorders graduate, said that she remembered being initially upset about the original plans for commencement.

“When the university announced the plan with so many limitations, the question that came to my mind was, ‘What will we be able to do then?’” said Illingworth.

But now after hearing about the new updated details of an in-person commencement in July 2021, Illingworth feels so much better.

The university announced plans for in-person college-based commencement ceremonies celebrating the Class of 2020 and the Class of 2021 that will take place, Wednesday, July 21, through Friday, July 23, and Monday, July 26, through Thursday, July 29, according to a campus-wide email sent early Friday morning.

The email added that graduates will have their names read, be able to walk across the stage, bring two guests to the ceremony, and that the ceremony will “ follow public health protocols set by the state and county for large outdoor gatherings that are in place at the time of the event.”

Illingworth said that the pandemic has taken a lot of opportunities and experiences away from everybody, so,“ I really am happy that at least my college graduation will not be one of those things.”

On the other hand, she said that the limited number of guests allowed to attend is a downside, as she has a family of seven and a boyfriend who she wants to attend. But, she has still decided to attend the commencement in July.

Many other students like Illingworth have also had a hard time figuring out who their two guests will be.

Reina Escajeda, a 2021 social work graduate, was eager to hear the new updates for commencement after the postponement of the previously announced ceremonies.

Escajeda said that she is happy to hear the updated information but not happy to hear about the restrictions that will be in place.

“Why are we only getting two tickets when things will be at full capacity June 15 and we had to wait this long to be able to graduate? I think students should be given a minimum of at least four to five tickets,” added Escajeda.

According to the California Department of Public Health, organizers of outdoor events with more than 10,000 attendees will be recommended, but not required, to stop physical distancing and coronavirus-related capacity limitations by June 15, 2021.

“Knowing that I am going to finally have a graduation ceremony” means a lot to Escajeda, who is a first-generation college student and a mother of a 6-year-old son.

Escajeda said that her son has seen her overcome many struggles to accomplish getting her bachelor’s.

“I want him to see me graduate so that he has a mindset that any goals he has can be possible,” said Escajeda.

Cheyenne DeWolf, a 2021 television, film and media graduate, is also very excited to graduate but “irritated” because she is not a local anymore.

Originally living in the dorms, DeWolf planned to move back in April 2020 but COVID-19 hit, and to stay safe she went to live back home in Detroit.

DeWolf and her family had planned their trip for the May 2021 ceremony, but that was soon postponed. DeWolf said that she hopes that the University officials keep their word this time and don’t cancel because she now has to spend more money on airfare to come for her commencement.

“I am looking forward to seeing everyone from my degree program and seeing each other for the first time in months,” said DeWolf.

Overall, DeWolf is “pretty pleased” with the new commencement guidelines and is excited to celebrate.

According to the email, details about tickets and the ceremonies will be announced on the commencement website on June 1.

The UT is awaiting a response from the University’s media relations team.