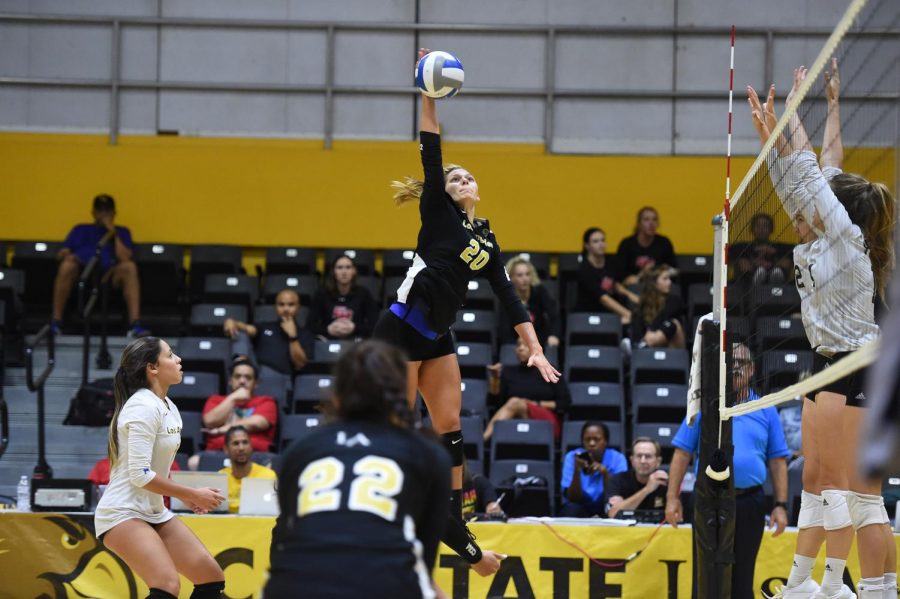 Alejandra Negron (20) hits the volleyball back towards the opposing side of the court. Cal State LA women's volleyball team won against Hawaii Pacific in a home game of 3-0.

Cal State LA showed out at the D2 West Region Volleyball Showcase where they finished with a 3-1 record. Cal State LA also played host for the tourney, with 12 games played over three days in the University Gym.

Cal State LA started the tournament hot, defeating Alaska in a three-game sweep. The team looked confident in their ability to score, as Alaska trailed in all three games.

The last game of the match was a nail-biter, leaving fans on the edge of their seats. The pressure was no problem for outside hitter Karla Santos, getting the job done with a match-ending kill.

However, the team also committed 11 errors in the match. Head coach Juan Figueroa wants to work on minimizing those errors and making their opponents earn every single point.

“We want to win, and all the girls are working hard to get there. It’s a process, but they are buying into it.”

The next match against Central Washington was an opportunity for revenge, since they eliminated the Golden Eagles in the first round of a playoff matchup last season.

This match was the only low point of the tournament for the black and gold, ultimately losing again to the Wildcats.

They started off the game winning the first set, but then alternated wins and losses. In the fifth game, the women were leading 8-6. After they switched sides, Central Washington managed to squeeze out a tight win with a score of 15-13 in the fifth and final game. It was a heartbreaking 3-2 loss for the Golden Eagles.

After the loss, Figueroa felt the team had to “bounce back and focus on [the next match].”

The following match was against Azusa Pacific and the squad came in with high energy and high intensity. They ended the match by sweeping Azusa 3-0.

“I think the loss [against Central Washington] motivated us to keep working hard and play no matter what,” said Santos.

It was not always pretty, the Golden Eagles nearly let a comfortable lead in the second game slip away from them, but eventually regained control of the match.

“It was 23-22 maybe. I called the timeout and just tried to keep the team calm,” said coach Figueroa about the tight second game.

Figueroa went on to credit the team for doing the “little things,” playing in the system and doing a better job serving.

During the first game, the Golden Eagles came right out of the gate when Alejandra Negron started it off with a service ace, and Julia Azevedo quickly chipped in with a follow-up kill soon after. The team made some errors, but still won the game 25-14.

In spite of some issues with errors, Cal State LA won both the following games; taking game two 25-18 and the final game 25-21.

Coach Figueroa hopes to work towards controlling their in game focus, a problem that has followed this team from get go.

“Consistency is what I’m talking about all throughout the match, and we’re having a hard time with that. I think that is what is affecting us with top teams in the nation. Consistency has been a problem with this group [since] they were freshmen. We are a very emotional team and a team that is strong and aggressive, so you tend to make errors.”

The Golden Eagles will open up conference play against Cal State Dominguez Hills on Sept. 21 at 5 p.m. at home.

Dominguez Hills are undefeated (6-0), but coach Figueroa is pretty confident about the match up.“Well I should tell you that they are undefeated because they haven’t played good teams, but yeah they are a good team. They are scrappy, they hustle, but we are looking forward to playing them next Saturday to start the conference.”