Cal State LA students show up to protest, despite threats of police violence and coronavirus 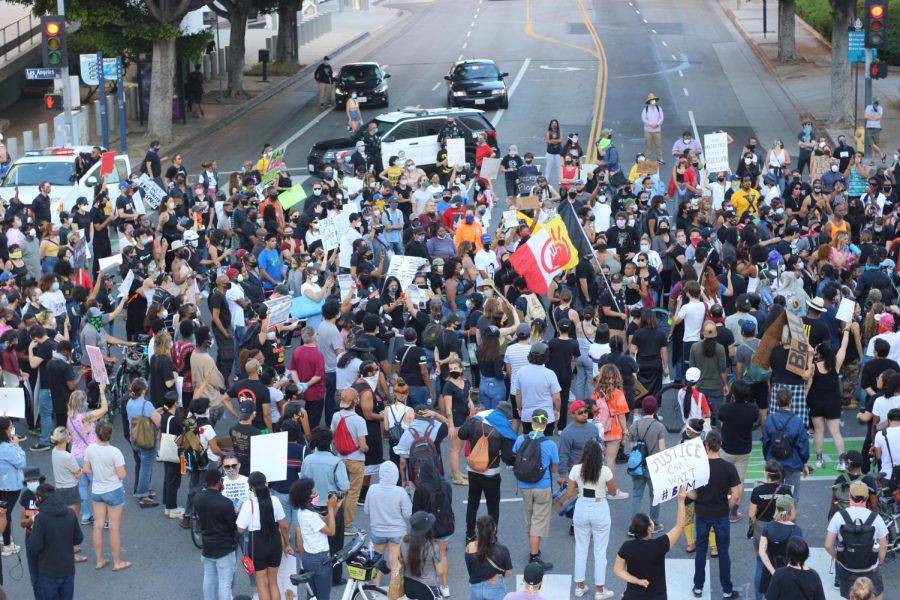 Protestors march in Downtown Los Angeles in support of the Black Lives Matter movement against police brutality. The recent protests were sparked from George Floyd's death in Minneapolis, Minnesota where we died due to a police officer pinning him down to the ground with his knee on his neck for close to nine minuets. Photo courtesy of Corinne Baptiste.

Some of Cal State LA’s very own have joined in on the protests against police brutality in LA County. In the weeks since George Floyd’s death, worldwide outrage has sparked protests to end social injustice and systemic racism in their respective communities.

Cal State LA alumna Destiny Moore has been an active member for Black Lives Matters for over a year. She’s been out in the protests, joining with all different people of color in the streets of LA County.

“It’s just one of those times where people are starting to wake up. We see a lot of different people coming out, showing [up] for black people and for black lives… I feel as well there’s an actual revolution taking place,” she said.

Cal State LA political science major Corinne Baptiste said she believes the existence of police brutality is “not deniable at this point,” due to the effect of viral videos that exemplify police brutality. She said she wonders now if the numerous videos are enough to bring on social change.

Baptiste attended a protest in Downtown L.A. late last month that she said was “energetic” and “powerful.”

“Overall the protest was very peaceful. There was no malice there. People just wanted things to change,” said Baptiste.

It wasn’t until California Highway Patrol cruisers attempted to keep protestors off the 101 freeway, according to helicopter footage obtained by ABC 7 Eyewitness News. A protestor jumped on the vehicle and fell off onto the pavement as it sped away. Baptiste said she witnessed the wounded man lying unconscious on the ground.

“I saw him when he was on the floor and bleeding out,” Baptiste said. “That was a wakeup call that things are about to get serious.”

Baptiste said because she has “immunocompromised people and undocumented folks in her immediate circle,” she has kept from attending most protests because she does not want to risk their health or put them in danger in any way. The pandemic is still affecting the U.S. on a daily basis.

For Cal State LA social work major Alexis Obinna, attending protests is concerning due to a heart condition. At a recent Downtown L.A. protest, Obinna attended from the safety of her car where she could be at least six feet away from other protestors.

“I drive my car and I get close to the protesters, honk my horn and play my music,” the Social Work major said.

While Obinna protests non-violently and from a 6-foot distance to lessen the chances of contracting COVID-19, when it comes to looting she doesn’t fully agree with it.

Obinna said she doesn’t agree looters should “take away from their own community,” but she does believe that the history of her ancestors validates the looting of corporations that do not pay their employees a living wage.

Cal State LA professor and historian Dawn Dennis said nothing seems to work when it comes to legislation, working with the police or having protests. She said “the fact remains America will [always] be racist.”

Dennis added how the conversation on looting hasn’t contextualized the hundreds of years black people have gone through.

On a similar note, Obinna said, “When you look at over 400 years of oppression and slavery, what more can we do to get our point across?”