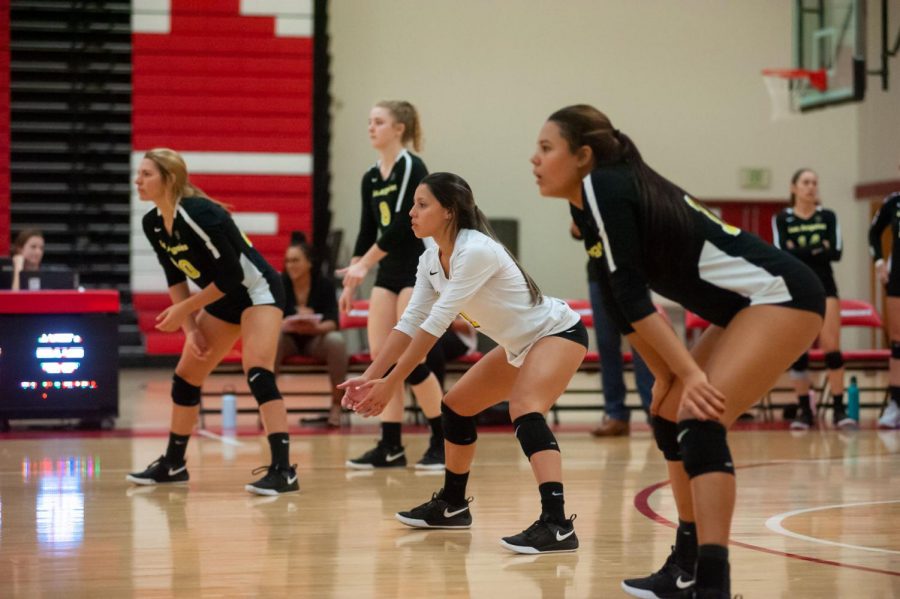 Cal State LA volleyball continues its winning ways this season after the squad improved its streak to six. They got a pair of 3-1 victories, the first against Stanislaus State on Friday and the second against Chico State on Saturday.

The match against Stanislaus State started rocky as the Golden Eagles had to battle back from deficits in both the first and second sets of the match. Cal State LA won both those sets 25-22, but was down by as much as 12-4 at one point in the second set. They dropped the third set 20-25, but came back in the deciding fourth set to win 25-19. A kill from Karla Santos ended the match against the Warriors.

Opposite hitter, Julia Azevedo, has been playing well during the winning streak and had another good showing against Stanislaus State, recording a team-high 12 kills. She cited preparation and tough play as keys to the winning streak.

“We are always practicing really hard, and also our energy during the games is really good. We are just fighting really hard to keep winning,” Azevedo said.

Freshman setter Shea McGovern has seen some more playing time during the Golden Eagles recent run of play, and finished with a team high 23 assists against Stanislaus State. Outside hitter Mickayla Sherman has been pleased with her play.

“She’s very consistent. From my perspective as a hitter, I already know what to expect from her. That makes my job easier,” said Sherman.

Cal State LA won against Chico State, even after losing the first set of the match. The black and gold rebounded from the initial loss and won the next three sets 25-19, 25-23 and 25-20, respectively.

The birds had a 58-48 advantage in kills over the cats, and got another big performance from Karla Santos who had a match-high 19 kills and a team-high 13 digs.

“She is one of our best hitters. Me, as a setter, I know I can trust a lot in her [because] I know I can set her [up], [and I know that] all the time she’s going to give her best to score the point. She’s really good,” said setter Laisa Maeda, who had a team-high 25 assists against Chico State.

Freshman middle blocker Shelby Grubbs had a team-high seven blocks in the match against the Wildcats. Sherman had 13 kills and libero Jeshmarie Suarez added 11 digs and two aces.

The winning streak is on the line this Friday when the team faces conference power Cal State San Bernardino at home. The Coyotes are 19-0 and have only lost five sets all season. One of those lost sets came in a 3-1 victory over Cal State LA earlier in the season.

Head coach Juan Figueroa is confident heading into the matchup against the No. 1 team in the country.

“I think that we are a way better team than them. They just keep the ball alive more than us. I think that’s the difference … Keeping the errors down will help us come out with the [win],” he said.

Multiple players echoed some of their coach’s sentiments.

“We need to minimize our errors and play our game, and move the ball around as much as possible,” said Sherman.