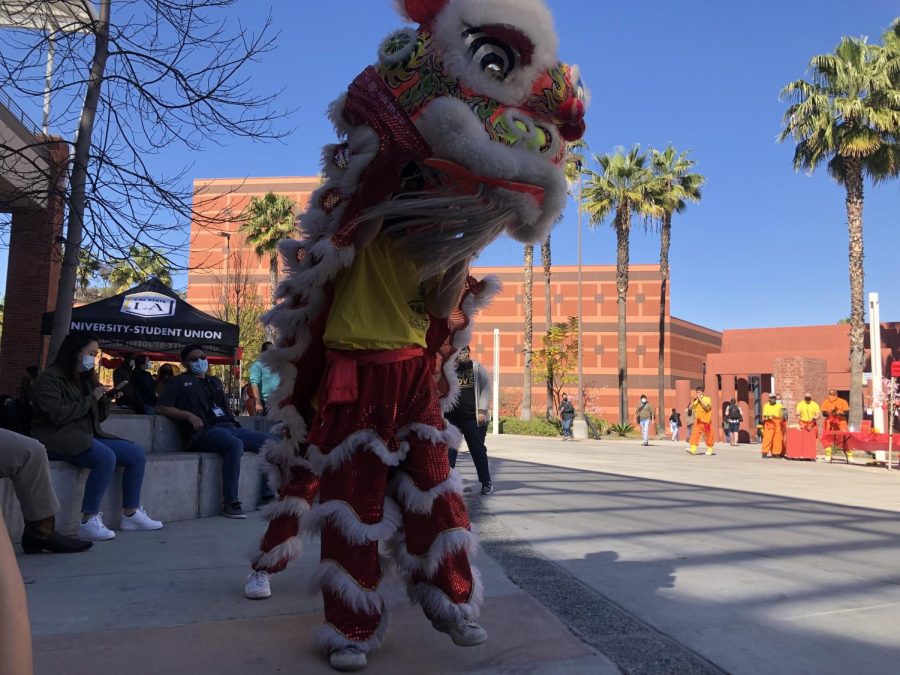 A Lion Dance being performed to chase away evil spirits of Cal State LA.

Cherry blossoms adorned the tables and Chinese calligraphy on red paper (chunlian) was plastered around the venue. Onlookers mingled with each other to observe and participate in the activity booths as Golden Eagle Radio played upbeat music in the background.

The event, set up as an attempt to bring students together as a community and increase cultural awareness, was the first introduction to the rich traditions and festivities of Lunar New Year for many students.

“I was just walking by, heard the music and wanted to see what was going on,” said English major Enrique Baez. “I’ve never learned about Lunar New Year before or anything, so this was my first time.”

Lunar New Year, also known as the Spring Festival, is one of the most important holidays celebrated among East and Southeast Asian cultures. The holiday is celebrated for the first 15 days of the lunar calendar, from the first new moon of late January or early February until the full moon arrives. Each year in a cycle of 12 years is represented by a zodiac animal, and 2022 is the year of the tiger, which symbolizes strength and bravery.

Culturally, the lion represents power and wisdom, and lion dances are performed in order to chase away evil spirits and bring prosperity to the new year, while creating a festive and joyous atmosphere for all.

“I really enjoyed the event since it was my first time watching the lion dance,” said Baez. “I have heard of the Lunar festivities but wasn’t entirely aware of the meaning of it. Truly, this event ignited my curiosity on learning more about other cultures’ celebrations.”

The welcoming of the new year usually involves extensive cleaning to rid the house and mind of the past year’s worries and troubles, while buying and wearing new clothes to signify a fresh beginning and the limitless possibilities of the new year. Various dishes are served, including dumplings, fish, spring rolls and sweet rice balls.

Yarely Rojas, a political science major, found the celebration to be an eye-opening experience.

“The event was very beautiful and fun for me,” said Rojas. “I received my first red envelope, which was really sweet to feel like I was part of a beautiful tradition. I wrote a wish and added it to the wishing tree. The last activity I was able to participate in was the calligraphy activity. It was beautiful, and I’m happy to have learned a new phrase: ‘thịnh vượng’ which means prosperous. This event taught me a little bit of the amazing traditions of Lunar New Year, and I’m excited to learn more about it.”

“The Lunar New Year celebration is traditionally a Cross Cultural Center event that we host every year. Last year it was held virtually, so this year, we were very excited to be able to have it in person and on campus for students,” she said.

“It was a great opportunity to bring students together, especially on the first week that students were returning on campus. We had a Lion Dance performance and it was really nice to see all the students engage in our activities such as lantern making, the wishing tree, and calligraphy. We wanted to combine education while sharing our culture,” she continued.

“Speaking on behalf of CCC and the Asian Pacific Islander Student Resource Center (APISRC), we’re thankful for all the participants that came out to our first in-person event this year. There will be a lot more events and programs to come,” she added. “To the students, I encourage you all to get involved. Not only with the CCC, but with CSI, ASI, any other student organization on campus to really make the most of your experience and time here at CSULA.”