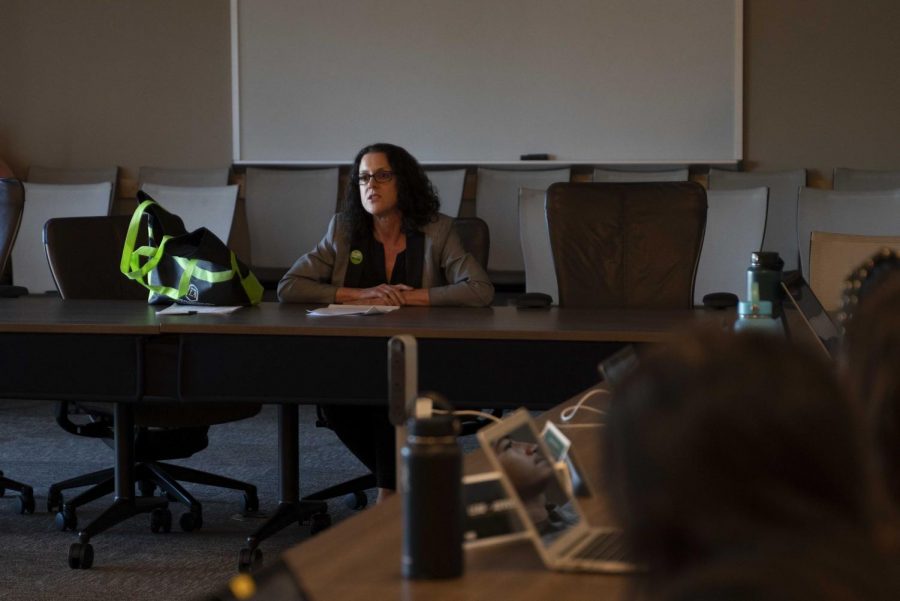 Jonna Fries, director of CAPS, attended the ASI Board Meeting and gave some insight into the accessibility of receiving CAPS services.

As controversy and anxiety loom over mental health resources on campus, the school’s director of Counseling and Psychological Services (CAPS), presented an update at a student-government meeting last month. It was the first time such a presentation occured at these meetings in at least three years, according to the Associated Students, Inc. president.

CAPS offers services meant to address psychological trauma, elevate coping abilities and improve emotional health, according to its webpage. However, Nick Cohen, Cal State LA’s Social Justice Caucus president, said there were too many obstacles for a student to receive counseling.

“[CAPS is] not being upfront with students about some of the hoops they’ll have to jump through in order to get the therapy,” said Cohen. He was referring to the program’s “mandatory workshops” that he says delay student’s access to counseling.

“We care deeply about Cal State LA students and we have worked diligently to lower barriers to CAPS’ services,” said CAPS Director Jonna Fries in an email after the ASI meeting.

During her presentation, she said students with suicidal or homicidal feelings and those who have experienced recent physical or sexual abuse will receive therapy the same day they request service. If that level of urgency is not met, students will “be seen within a few days for a brief assessment,” said Fries.

On the Cal State LA website, CAPS states after scheduling an appointment, “you will initially be seen for a brief assessment by a licensed psychotherapist,” but it does not disclose needing to go to workshops before doing such.

“We want the school to have enough resources to provide all students who ask for one-on-one therapy [to get it] in a timely manner,” said Cohen. “If the school is having to put barriers between some students and one–on–one therapy, then we believe the school should be more upfront about it.”

After the assessment, the counselor determines whether the student needs immediate counseling, otherwise the student will be assigned to workshops. She said the workshops are meant to provide a health service to “low-risk” students and allow prioritization of the higher-risk students to see a counselor quicker.

In her email, Fries clarified the workshops don’t require verbal participation if students have privacy concerns. There are support groups, she added, for those suffering from loss and anxiety, if students feel comfortable sharing. Fries also said, “nobody gets turned down for individual therapy.”

Another matter concerning Cohen is the number of counselors available. Fries mentioned CAPS is in the process of hiring two additional full-time therapists. Currently, there are 11 therapists at Cal State LA.

However, according to a Fall 2018 fact sheet provided by the campus, (the most recent one available) 27,685 students were enrolled, so that would potentially work out to 2,516 students for every one counselor. The International Accreditation of Counseling Services (IACS) suggests a maximum ratio of one counselor to every 1,500 students. Fries attributes a lack of funding to the program’s inability to hire more counselors.

“[Cal State LA] could put in a lot more resources into making the existing CAPS program more robust,” says a letter signed by Department of Psychology faculty members, which was obtained by the UT. “Mental health becomes a political issue when students at a public university are denied access to adequate counseling services, despite being promised such.”

The letter was dated in Dec. 2019, crafted partially in response to reports of shooter threats at the school in the past fall semester. The threats were deemed non credible by law enforcement.

The letter goes on to “fully endorse” demands made from the Social Justice Caucus and Golden Eagle Justice, another activist student organization. The demands include hiring additional counselors to meet the suggested IACS ratio, eliminating the workshops process, implementing further training for counselors and hosting “a bi-annual mental health town hall.”

“We need to step forward and do the right thing for and by our students when it’s called for,” said Gaithri Fernando, chair of the psychology department, when asked why she signed the letter.

ASI President Jacquelyn Acosta, who led the meeting where Fries spoke, asked the director who to consult when additional funding for CAPS is sought after. Fries said the CAPS budget is funded by the student health services fee, which recently increased. However, she was uncertain who to ask for more money, but said she’d follow up on the matter.

Another controversial topic among students is the so-called handcuff policy.

“If someone is having suicidal ideation, they’re being escorted by the police,” said Jocelyn Vargas, an ASI board member present during Fries’ update. She added, “I think that criminalizes mental health a lot.”

Fries informed the board that to her understanding, the policy has changed. The Department of Public Safety did not respond to an inquiry from the UT regarding the policy.

ASI was unable to ask follow-up questions regarding when or how the policy has changed because Fries said she had to leave the meeting after her prepared remarks for a prior appointment with a client. The director briefly answered a couple questions, including the one about funding, before departing.

When asked via email by the UT, Fries did not respond directly to an inquiry regarding the alleged unanswered questions.

CAPS’ alleged shortcomings in communication with ASI frustrated Cohen. He feels CAPS should spend more time listening to students’ requests. “I think since they are servicing students, they have to listen to us if they want to do their jobs well. They have to receive feedback, and they’re unwilling to meet with us, and that’s been very discouraging.”

“Students have a lot of good ideas and we know what we would like to see. Please meet with us, please listen to us, please work with us,” said Cohen.