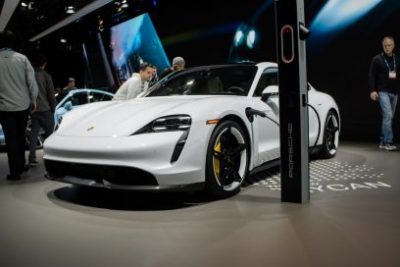 The brand new Porsche Taycan is shown as on lookers gander.

Clean-air vehicles provided a glimpse of the future at the L.A. Auto Show. The annual car show, which runs from Nov. 22 through Dec. 1, introduced concept cars to production-ready models.

Porsche revealed its new fully electric vehicle, the Taycan, which will start shipping out in early 2020. Taycan’s base model costs $100,000. For comparison, the Nissan Leaf, the most affordable electric car, is retailed at less than $30,000. Gas-powered vehicles remain less costly as the 2020 Chevrolet Spark retails just above $13,000.

Other than the typical hybrid and electric vehicles, a new contender entered the ring. The hydrogen-powered fuel cell is slowly making the rounds through car manufacturers. The 2021 Toyota Mirai, 2020 Honda Clarity, and the 2020 Hyundai Nexo were few of the hydrogen cars available for guests to see on the show floor.

“Automakers and environmentalists have long hailed fuel cells as a revolutionary technology that can reduce planet-warming tailpipe emissions, which account for a significant portion of the greenhouse gases released in the United States,” according to the New York Times.

Cal State LA’s own hydrogen station became certified Nov. 20 to sell hydrogen to all makes and models adding it to the growing number of Los Angeles county’s stations. “We can build these vehicles that refuel quickly in a matter of minutes rather than hours,” said Michael Dray, station manager to Cal State LA’s Hydrogen Research Facility. While only 42 fueling stations exist in the state, former California Governor Jerry Brown proposed in 2018 to expand to 200 stations by 2025.

Though some may consider clean air vehicles an advancement, the technology can still face setbacks. Earlier this year, Pacific Gas and Electric company (PG&E), the largest supplier of electricity to Northern California, shut off power for large swaths of the region, in an effort to minimize wildfires, as reported by the San Francisco Chronicle.

Some owners of electric vehicles could have been affected since they no longer had the ability to charge their cars, which, in turn, affected their ability to evacuate the area, if need be. This is a relevant concern, as California experienced an intense season of wildfires this year.

However, along with the perk of being environmentally-friendly, the vehicles can produce savings in refueling.

“An average person would spend about $540 driving an electric vehicle for the typical 15,000 miles per year. In some states, electric vehicle owners can fuel their vehicles to capacity for less than [a] dollar,” according to Forbes.

For more information on clean air vehicles such as those powered by fuel cell technology be sure to check out Cal State LA’s own hydrogen research facility.