Cycles of violence in La Puente? 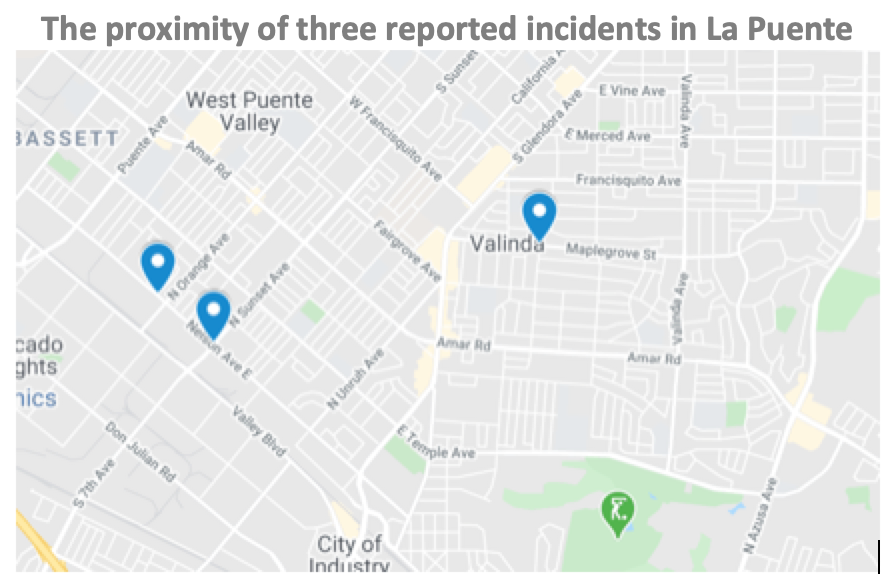 Are they all real or imagined?

It’s unclear because police could not confirm the details of two of the three reported incidents. La Puente residents claim to have heard the gunshots from their homes. In an interview with the UT, a resident claimed to have video footage of the sound of gunshots for one of the two incidents that lack other evidence. However, the resident report not wanting to share the video with police because of safety concerns due to gang activity in the neighborhood.

And this is part of the problem, according to police officers such as Lieutenant David Auner. La Puente residents are too afraid of gang members to step up to serve as witnesses or to provide possible evidence.

In any case, one shooting and two other alleged incidents described on social media and phoned in to police have heightened safety concerns for residents:

Feb. 20, 2020, around 9:30 p.m.: Police arrested a suspect for shots fired. This was the first reported drive-by on Maplegrove and Aileron.

Feb. 22, 2020, around 3 p.m.: People reported to police that they heard gunfire near Sandia and Nelson avenues at 3 p.m., just three miles away from the first incident. However, police say there were no eyewitnesses or evidence.

Feb 27, 2020, around midnight. Half a mile from the second location, there was a third reported drive-by. Police say the reports were made from people who heard gunfire on Sunset and Nelson avenues but again, there were no eyewitnesses or evidence.

“Two of them (on Sandia and Nelson, Sunset and Nelson) were just calls from people,” Auner said. “They had heard the sound of gunfire, but nothing was discovered. There were no witnesses, no victims. There was nothing. No information, other than people who just heard gunfire.”

“The one shooting that was reported on Maplegrove and Aileron: Nobody was injured and the suspect was arrested,” he added.

Still, residents still feel uneasy, especially after several fatal shootings in the city over the summer.

“It’s scary. I have to constantly be aware of the cars passing by my street when I’m out in my front yard,” said La Puente resident Katrina Sanchez in a direct message interview on Instagram.

Sanchez said that she heard about eight gunshots around 3 p.m. on Feb. 22 while working in the kitchen of her home, near Sandia and Nelson avenues.

Five days later, others reported hearing about the third reported shooting that week — just a half-mile from her home, she noted.

So when shots were fired the first night, the second night and third night, the man behind the account told his followers.

Residents like Sanchez wonder how they’re supposed to ease their nerves when in less than a week and three miles apart these kinds of incidents may be happening: “Law enforcement needs to patrol areas more to help reduce the issues that have [reportedly] been happening lately.”

Auner said the number of cars in the city varies every day, depending on the day or time.

The best thing to do in these situations is to “see something and say something,” according to Auner.  Keep in touch with your neighbors, send in tips regarding any suspicious activity, and trust your feelings of uncertainty.