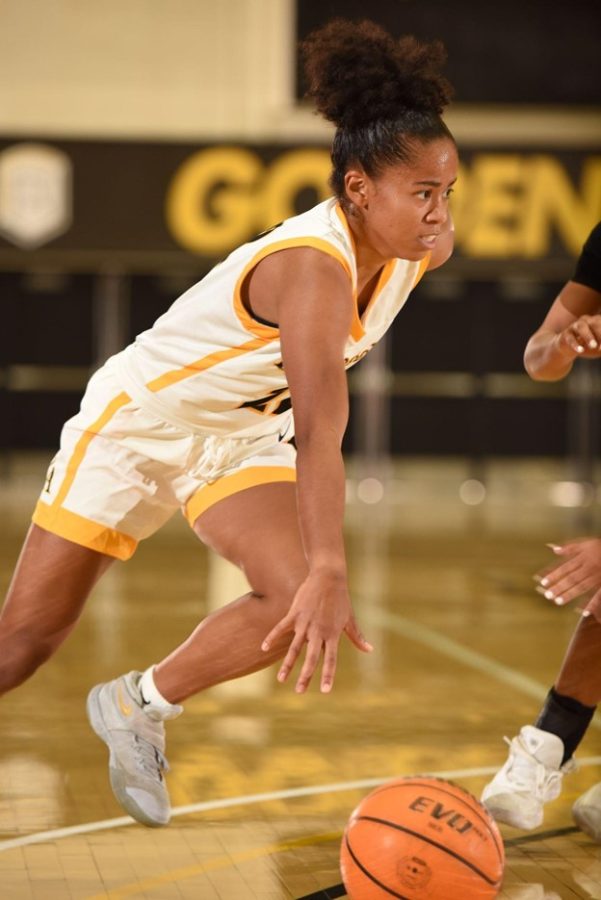 Guard Nicole Flennaugh dribbling the ball to the net.

The Lady Eagles’ defensive pressure caused 15 turnovers by Chico State, and held the Wildcats to 32% shooting from the floor. The Eagles capitalized on opportunities from the turnovers, leading to 16 points.

A hot start to the second quarter from guards Nicole Flennaugh and Lily Buggs helped the Lady Eagles go into halftime with a 17-point lead. Flennaugh finished the game with a team high 16 points, while Buggs had 14 points and multiple defensive plays that gave the team momentum.

Jada Johnson also had 11 points and 11 rebounds in the game, making the contest her seventh double-double of the season. She continues to be a solid presence in the paint, and she currently leads the California Collegiate Athletic Association (CCAA) in rebounds.

Torino Johnson, head coach of the women’s basketball team, expressed pride in how the team has seemingly turned the season around.

Johnson also credits the team’s mentality and on-floor leadership for their recent success.

“We can’t be in a celebratory mode, and we can’t be down,” he said. “Our team has bought into the ‘next play mentality.’ If we do everything we are supposed to do within the game, we are proud of our performance.”The Lady Eagles are now 11-11 on the season, picking up momentum at the right time and winning seven of its last ten games. The team has three games remaining on the schedule with hopes to qualify for the conference tournament. The next game is tomorrow at Sonoma State.