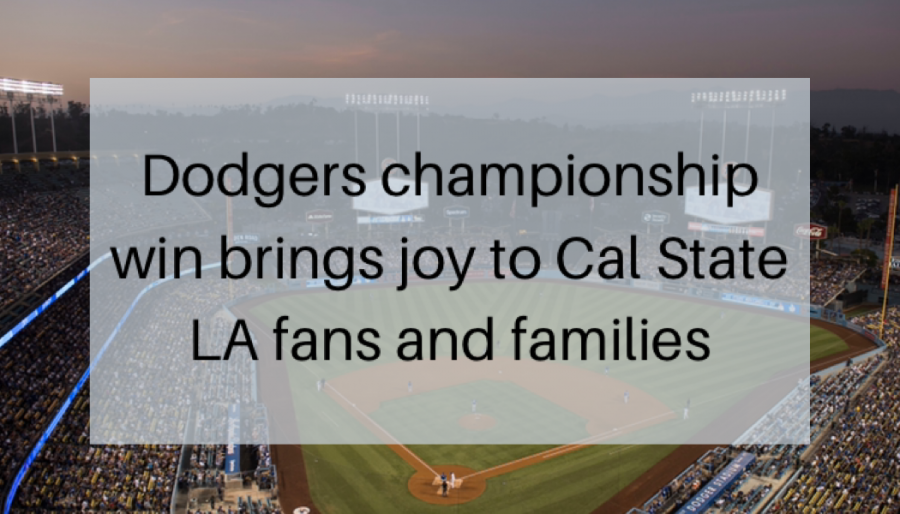 Being a Dodgers fan isn’t always easy said Diana Chavez, Cal State LA’s Associated Students Inc. president. But over the years, watching Dodgers games kept her connected to her father who was detained by Immigration and Customs Enforcement and deported to Mexico in 2016.

During the final game of the World Series Tuesday night, the two called each other over Whatsapp and watched their favorite team win together.

After a 32-year-long drought, the Los Angeles Dodgers are finally champions after defeating the Tampa Bay Rays 3-1 in Game 6 of the World Series. The last time the Dodgers won the World Series title was back in 1988.

Dodgers fans continuously suffered the heartbreak of seeing their team lose, causing them to be “frustrated,” like accounting sophomore Alberto Martinez.

“I didn’t want to keep being let down time after time,” Martinez said.

But for some, like Chavez, the win reminded her of what the game meant to her and her dad.

“We are 130 miles apart and we do not see each other often. My dad has always been a Dodgers fan and growing up we would always watch the games. This win reminds me of all the good times we [had] with family,” Chavez said.

The Dodgers’ win also brought back fond memories for graduate student Rodger Buena who thought of his late grandfather when his family’s favorite team won the championship.

“I grew up watching the Dodgers with my dad and grandfather,” he said. “My grandfather was a big Dodger fan when he was still around. One of the first things I thought of when they [won] was of him.”

For fans across Los Angeles, this year in particular, was filled with many ups and downs, beginning with the death of L.A.’s beloved Kobe Bryant and his daughter Giana Bryant who died in a helicopter crash back in January, along with seven other victims who tragically lost their lives.

“We just lost so much this year with Kobe. Kobe was L.A. and all L.A. teams are intertwined,” Chavez said.

The road to the World Series has been like no other year due to COVID-19. The pandemic shortened their season to only 60 games, rather than the 162 games teams usually play.

Despite the odd season, the “Boys in Blue” were committed to winning, and that started this offseason with the addition of MLB All Star’s Mookie Betts and David Price. Price would ultimately opt out of the season due to the pandemic and wanting to keep his family safe and healthy.

It would be a team effort to play all 60 games away from fans, family and home-field advantage. That didn’t stop the Dodgers in their determination to bring Los Angeles the championship trophy.

The Tampa Bay Rays struck first in Game 6 with a home run in the first inning.

Tampa Bay’s Blake Snell cruised through five innings. Snell was taken out, which was an interesting call for Rays manager Kevin Cash. In five innings of work, Snell only gave up one hit and struck out nine.

The Dodgers struck in the sixth inning, pushing two runs across the board to put them up 2-1. In the eighth inning, Mookie Betts hit a home run to add to the Dodgers lead. Julio Urías came in to shut it down, making the Dodgers the 2020 champions.

Once the ball hit the back of catcher Austin Barnes’s mit, kinesiology senior Genessy Rivera said the long-awaited win forced tears down her face.

“I actually couldn’t believe it! I got goosebumps. I actually cried,” she said. “It’s so special that I can’t wait to tell my kids one day. It’s pretty historic.”

The year 2020 started as a dark year for the city of Los Angeles but then the Lakers brought home a championship win, the first one since 2010.

Seeing two major Los Angeles teams win their leagues’s championship brought happiness and a sense of healing to one of the most difficult years this generation has ever seen.

“I can finally sleep better,” said Rivera. “I’m going to wear my Dodgers and Lakers jersey at the same time for this whole week. Ever since the unfortunate [tragedy] of Kobe, it is a dedication for him. It was the Mamba Mentality he left us and the [win] is for him.”