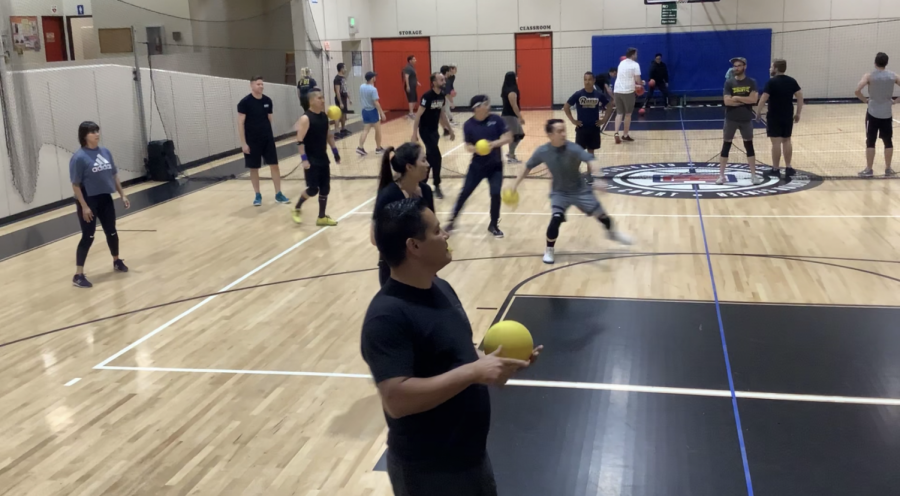 For most adults, dodgeball is a game of the past. After all, the idea of pelting a friend with a rubber ball might seem a bit juvenile.

But the Eagle Rock Yacht Club, an adult dodgeball league, is looking to change that notion.

The group is reclaiming the sport as a way to escape the daily grind and make friends. Not only has it grown to more than dozens of players in the past 15 years, it organizes activities off the court such as food drives to help surrounding communities. “Through dodgeball, civic service, relationships with rec centers and our youth, the Yacht Club hopes to inspire you to pursue the common good,” according to the group’s website.

Not an actual yacht club, the group adopted the moniker as an allusion to its “leisure first” attitude. If its name is somewhat misleading, its slogan is not: “Dodgeball, Drinking, and the Common Good” reflects the core values of the league, according to Eagle Rock Yacht Club ambassador Tracy Barbosa.

“I started playing with Eagle Rock about nine or ten years ago,” Barbosa said. “I found out through a friend who I played soccer with, she said, ‘You’re gonna love this. It’s a group of people that want to be active and then go drinking afterwards.’ But after a while, it started becoming something where we were getting involved with the community we’re in.”

Members of the leagues say that helping the communities around them is just as important as the games they play. For instance, the Eagle Rock Yacht Club holds food drives, fundraising events, and, of course, dodgeball matches, to raise donations for the recreation centers and local community youth programs.

“We work with recycled resources. We’ve done the food drives for the food bank, and we’ve pledged money and done charity games for the gym and the kids,” said Barbosa. “The dodgeball was cool, but really the hook for me into this was the community and the common good we do. Getting to do good and hang out with my friends, who are also doing good, is amazing.”

Other Eagle Rock Yacht Club charitable initiatives include Yacht Grub, a kids cooking class; Yacht Plot, community gardening; Yacht Pix, a kids photography class; and its “flagship program,” Yacht Crew, kids dodgeball. The organization describes their purpose for these programs as being created to “to provide youth with fun, safe and creative experiences that go beyond what they might have access to at school.”

“What we are is essentially a dodgeball league for grown-ups, but we use that as a hook to essentially gather a group of like-minded folks to go out and do good,” said Eagle Rock Yacht Club ambassador Rob Tsuji.

A few years ago, when the group heard that some families in the area wanted Glassell Park recreation center to stay open on Sundays, the league came up with a simple solution.