Two wins for seniors with help from friends and neighbors 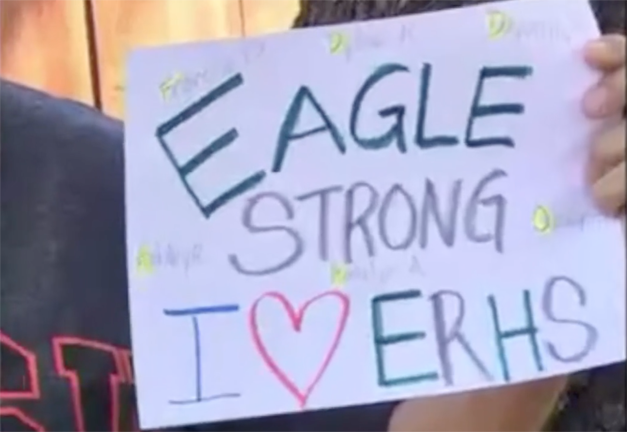 Eagle Rock teachers and staff are featured in a video for the Class of 2020 on Eagle Rock High School's website.

Eagle Rock high school students are starting to have a reputation for getting things done.

In recent months, they not only helped secure what is effectively a $150,000 grant for the student body, but some they’ve also been partially credited for prompting former President Barack Obama to deliver a speech at a nationwide “Graduate Together” virtual celebration last weekend.

The idea to invite President Obama came about on a whim.

“Personally what I saw in him all those years ago was a great speaker and a great president and I just figured, ‘Why not?’” said Lincoln Debenham, a senior at Eagle Rock.

He took the idea to Twitter. “In an unprecedented time, it would give us great comfort to hear your voice,” read his April 14 tweet.

The tweet started gaining traction among his classmates and community members and soon after, went viral with over 200,000 likes and 57,000 retweets.

National news sites such as CNN and Now This covered the story, including his tweet.

On May 16, Obama spoke to the class of 2020 as part of the XQ Institute’s Graduate Together program that included A-list artists such as Zendaya, Timothée Chalamet and singer and songwriter Dua Lipa.

The former president is also scheduled to speak June 6 to the nation’s 2020 seniors during a second commencement address.

Debenham said he’s not sure how much of the responsibility to take for any of it but he was nonetheless stoked about the developments.

After watching Obama’s recent commencement speech, Debenham said he felt “uplifted” and was surprised his tweet could have had a hand in pushing Obama to give speeches at all.

Obama’s response to the tweet was short and sweet. According to CNN, Obama’s spokeswomen, Katie Hill, said he was “very flattered” by the request with no other indication of whether the former president would fulfill the twitter outcry.

His classmates were impressed and excited, too.

“It’s cool to see someone from our little community to reach out to someone who’s as big as” Obama, said Elias Espinoza, Eagle Rock high school’s senior class president.

It wasn’t the first time the seniors and the neighboring community worked together to accomplish a goal. In January, the senior prom committee entered a competition, hosted by Hollister and High School Nation, for a chance to win “the ultimate” senior prom, worth $150,000, based on who got the most votes.

Espinoza didn’t have high expectations until a month later, he learned they were in the running.

“Someone from Hollister called one of the assistant principals at Eagle Rock, and they pretty much said that we were in fourth place in the nation,” Espinoza said. “That was insane. From there, we started picking up the pace.”

Espinoza and other students reached out to their family and friends and campaigned for votes at the Eagle Rock Neighborhood Council meeting on Feb. 4, urging community members to vote for the local high school. At that point, the students had less than a week left to gather enough votes to win the grand prize.

“It’s not that big of a town and it’s a pretty good neighborhood, too. [While] going around asking people, I definitely felt that sense of community,” Espinoza said.

Arlene de Guzman-Alpuerto, a teacher at the school who advises the senior class officers, encouraged students to vote for the seniors to help boost their chances of winning the competition.

“It wasn’t just the seniors that voted. It was the entire school that voted and the community,” Alpuerto said.

The collective votes won the senior class the grand prize of Hollister’s competition.

Then, the coronavirus pandemic struck. Prom was canceled.

“I think initially, it was a shock, Alpuerto said. “They had worked so hard for months prior to the closure, and then to kind of have this anticlimactic month of March — I think it was devastating for some of them.”

Thankfully, in early April, Hollister confirmed to the students that the prize money would be given to the school.

Sixty percent of the prize money would go to the senior class in the form of refunds for senior dues, free yearbooks for each senior and a class of 2020 reunion when it is safe to meet in person. The remaining 40 percent will go to the junior, sophomore and freshman class trust funds, according to a note that was emailed to the Eagle Rock seniors. Alpuerto said the percentages are subject to change.

Even though they don’t get to dance the night away at their prom venue, the LA City Club, this year, senior Jacob Bernardino enjoyed Hollister’s “virtual prom” on May 2.

“All the people there were seniors, basically, so you could mingle with other seniors you don’t know [but] who you can relate to in the chat,” Bernardino said.

Bernardino will be majoring in English literature this fall at Pasadena City College, which will hold fall classes online. Both Debenham and Espinoza will join Cal State LA — with political science and undeclared majors, respectively.

The Cal State University system will also continue its classes online, which is fine with Espinoza for the time being.

“I think it’s going to make [being on campus] a lot more worth it when we’re finally done with all of this,” Espinoza said.