Los Angeles residents on the Eastside stock up on supplies, families prepare for remote classes 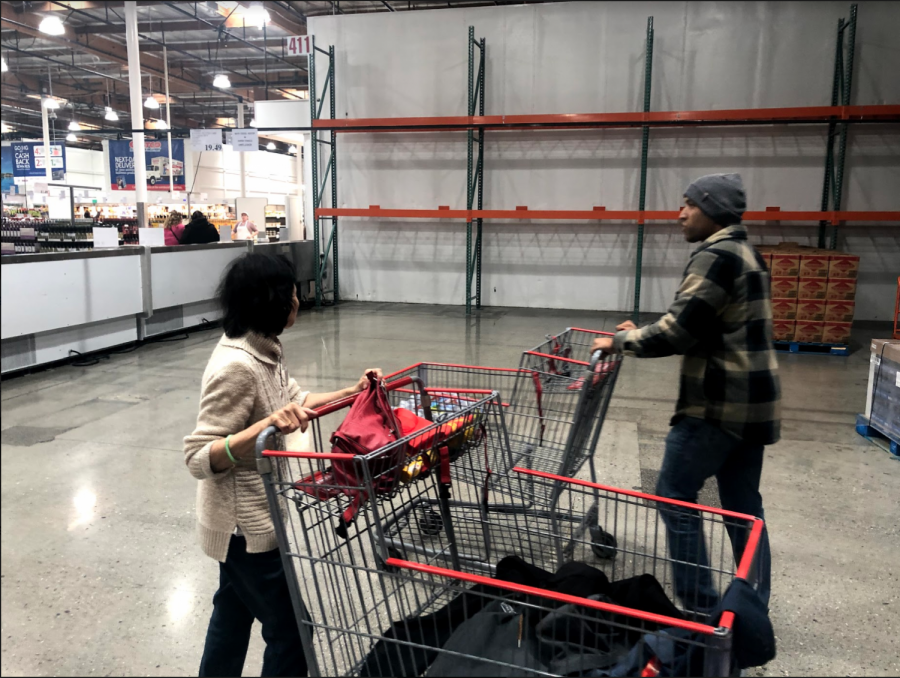 From products flying off the shelves to local families preparing to work or take classes remotely, coronavirus fears shook the Eastside.

At a Costco in Alhambra on Tuesday, all toilet paper and paper towels were sold out. A stream of customers asked Costco employees when they expected the items to be back in stock. Several Costco workers wore latex gloves and dozens of shoppers were seen wearing gloves and face masks. The Kirkland brand bottled water was also out of stock but there were still Arrowhead bottled water cases, which were also being quickly snagged.

A Costco employee said in a phone call early Wednesday that there is still no confirmed date when toilet paper and paper towels will be back in stock.

He added: “It’s important…to make sure we are following the expert advice and not making things up and sharing things on Facebook and social media that may not exactly be accurate.”

Other retailers such as Target and Walmart have also run out of supplies, and have begun limiting how much consumers can buy of certain products.

Employees at some mom-and-pop businesses with declining customers worried about cutbacks in hours.

A combination of speculation, questions and concerns swirled on social media about area schools, as administrators made tough decisions.

The Los Angeles Community College District announced Wednesday that “as many classes as possible will be moved into an online education platform” for its schools, including East Los Angeles College.

The same day, Cal State LA President Bill Covino announced that classes will be canceled most of next week to prepare them to be taught online through April 24.

In the days and hours before the announcement, university professors and students anxiously awaited news of possible changes.

“I think they just tell us things to try to keep us from worrying,” said 19-year-old Jessica Rosas, a first-year art major.

Gilbert Rivera, a 26-year-old physics graduate student, was prepared for the worst as he walked around campus.

“I personally have been doomsday prepping, making sure I grab extra cans of food, washing my hands. I carry hand sanitizer in my pocket,” he said, adding that he had taken chemistry classes as an undergraduate so he made his own 70 percent ethanol spray. “I have disinfectant wipes just to be safe. People might call me an over-preparer but if nothing serious happens, at least I can say I prepared.”

Some students without Internet service at home worried about all their classes going remote: How would they succeed this semester? And professors worried about students who rely on certain campus services.

“We will keep the library and computer labs open and available to students who lack access to technology,” Covino wrote in the email. “Student services, residence halls, and dining halls will remain open. The Student Health Center, including Counseling and Psychological Services, will continue to see students.”