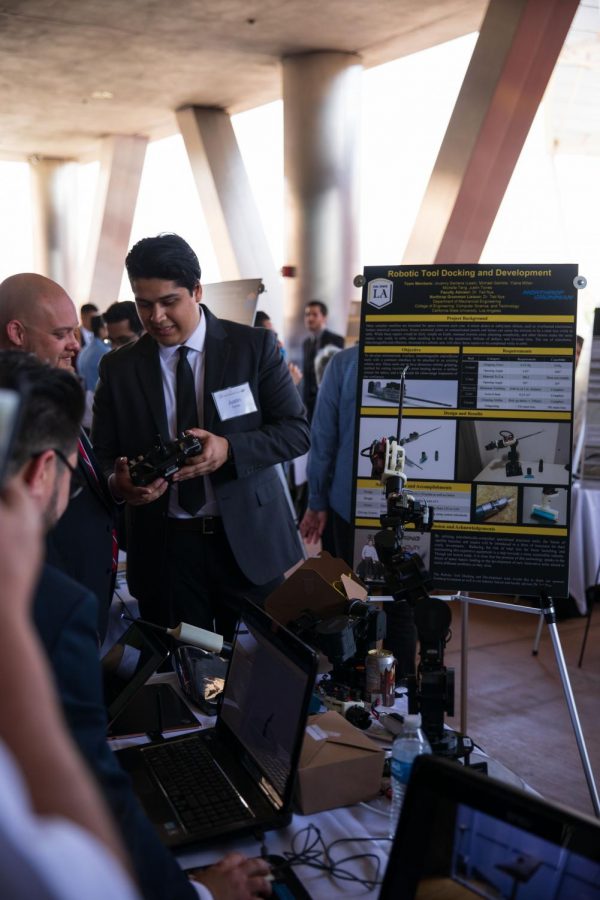 Justin Torres shows an attendee his team's project on a robotic tool dock.

Over 150 seniors gave presentations and displayed their final projects to peers, family and major companies.

Jesse Robles, an electrical engineering major, will be graduating from Cal State LA this fall. His group project displayed a small engineer dynamometer. The project, which is sponsored by Cal State LA’s mechanical engineering department, consisted of a test engine for the Society of Automotive Engineers (SAE) Baja club on campus, an organization that creates an offroad vehicle used to compete against other universities.

Using the engine, they placed it on their testbed to monitor and evaluate the horsepower.

After months of meeting up with his group mates on a strict schedule, they were able to create the model according to plan.

“It was a great experience, a lot of growth for sure,” said Robles. “Looking back at how I was as an individual back in the fall semester I can tell there was a lot of growth.”

The design program is an important opportunity for the young engineers, as it can help launch their professional career. The expo began with a few words from Dr. Emily Allen, Dean of the College for ECST.

During the morning ceremony, Dr. Allen also recognized students who were helping other groups for their final projects. The 80 projects were displayed around the balcony of the Golden Eagle Building while students gathered around their tables waiting for their turn to present their project to their peers.

Guests and fellow students were given a booklet where they would have the opportunity to grade each project. The booklet would then be used to help determine the grade for each group project.

The Capstone Senior Design is a year-long project where students are put into groups to design a project while being mentored and sponsored by professionals in the industry. This year, a total of $300,000 was given to help support the students on their journey.

Some of the sponsors this year included Boeing, Southern California Edison, JPL, UPS, and the Metropolitan Water District of Southern California. The 1,200 hour projects began in June 2018, when students submitted their project proposals that kickstarted their capstones.

This year, projects covered topics such as aerospace, automotive, robotics, consumer safety, biomedical and data analytics. This is a major stepping stone for seniors because of the opportunities such as creating a physical prototype of a project, technical support and even employment opportunities after graduation.