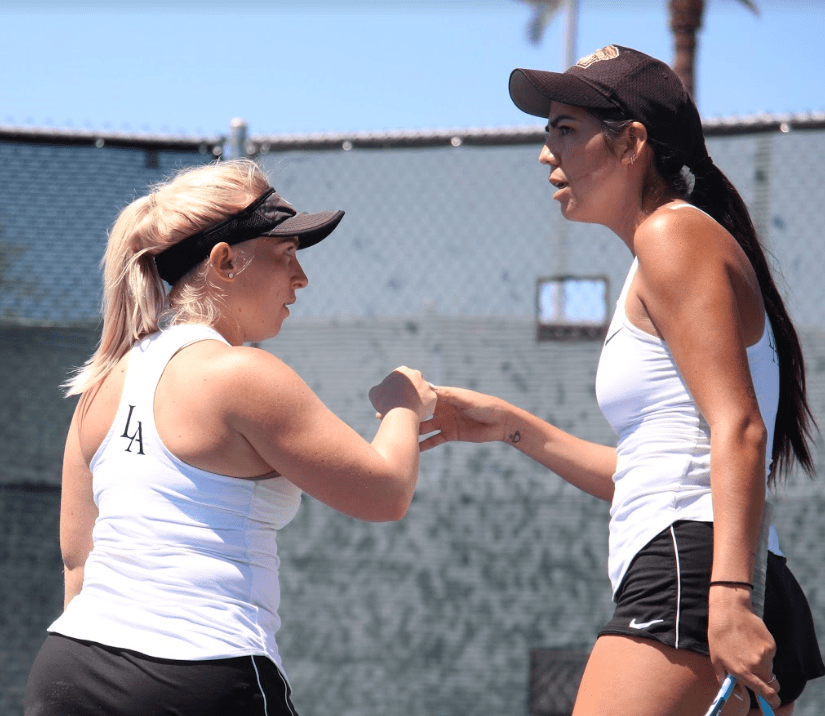 Golden Eagles' Amanda Schneider (left) and Isabella Lopez (right) clinched the first point for their team in a 6-4 win against Point Loma's Gabi Armas and Ellie Gamble in the 5th Place Match of the PacWest Conference Championship. Photo courtesy of PacWest Conference

The Golden Eagles got off to a good start in the tournament, as they opened with a 4-0 victory against the tenth seed, Holy Names Hawks.

After the win, members of the Cal State LA tennis program received awards at the PacWest Conference Championship Banquet.

Cal State LA’s next match was against nationally ranked, No. 11 Hawaii Pacific Sharks. Unfortunately for the Golden Eagles, the Sharks knocked them out of the tournament en route to a 4-0 victory.

Despite being eliminated from championship contention, Cal State LA’s season was not over just yet.

The “Golden Girls” would enter in a consolation bracket against the Concordia Eagles and proved to be the better Eagle squad, as they defeated their opponents, 4-1.

Their final match of the season was against the sixth seed Sea Lions, a team that defeated Cal State LA twice this season. In both of those matches, the Golden Eagles lost, 4-3.

Golden Eagles’ Amanda Schneider and Isabella Lopez picked up a 6-4 victory over the Sea Lions’ Gabi Armas and Ellie Gamble at the No. 1 doubles to clinch their first point.

Di Laura got the second point for the Golden Eagles in with a 6-1, 6-3 win at No. 2 singles against Armas.

Lopez defeated Gamble, 6-4 and 7-6 for the Golden Eagles’ third point at No.3 singles.

Mariko Sagara recorded the game winning point for Cal State LA with a 7-5, 6-2 win against Point Loma’s Nicole Camaratta at No. 6 singles.

The match not only marked the end of the women’s tennis season, also the end of Sandy Kriezel’s 25-year coaching career.

She has compiled a 212-207 record in over 20 seasons as a head coach, which includes an 89-90 record in nine seasons with the Golden Eagles.

It was also the final match in the careers of Di Laura and Lopez. Both players have been key components in the program’s success during their time as a Golden Eagle.

As the 2018-2019 season comes to an end, the Golden Eagles say goodbye to their two seniors and longtime head coach.

A new chapter lies ahead for the Cal State LA women’s tennis program and they will be back in action next season.