Men’s baseball continues to struggle as the season winds down. 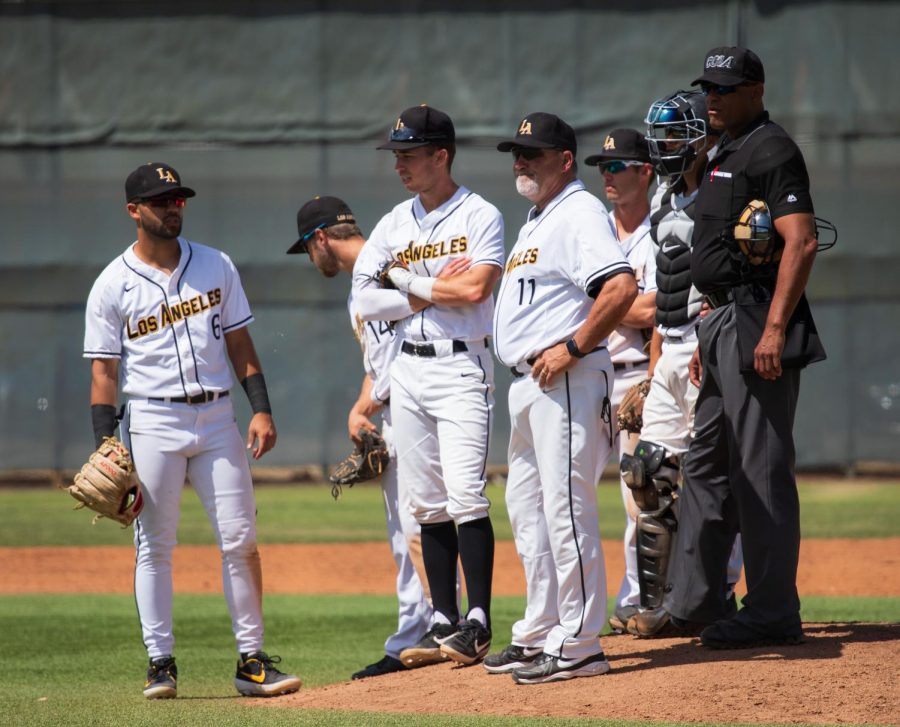 The Golden Eagles got off to a rough start as they dropped the first three games but managed to salvage the series finale.

The first two games began at San Marcos but the Cal State LA lost both; 9-8 in the opener and 12-4 in the second game.

In the opener, the Golden Eagles had a pair of two-run home runs off the bats of right fielder (RF) Adam Gordon in the first and third baseman Nate Alam in the second.

Nick Moisant started for Cal State LA and had a rough outing. He gave up seven runs (six earned) on ten hits in four innings.

Leading 4-1 in the second, Moisant gave up a three-run home run to Cougars’ RF Cabot Van Til.

Cal State LA answered back in the fifth after an RBI (run batted in) single by Gordon scored shortstop Tyler Odekirk.

The Cougars chased Moisant out of the game after he allowed another three-run home run, this time off the bat of their catcher, Andrew Garcia, as the Cougars took a 7-5 over the Golden Eagles.

A sac fly in the sixth gave the Cougars a 8-5 edge over the “Boys in Gold”.

After picking up two runs in the seventh, the Golden Eagles tied the game, 8-8 in the eighth behind a sac fly from pinch hitter Nic Sandoval.

But a go-ahead RBI sac bunt by Cougars’ designated hitter (DH) Andrew Cowell spelled the end for the “G.Es” as they lost, 9-8.

Saturday wasn’t any better for Cal State LA as they were blown out 12-4.

Saxon Andross had a rough day on the mound as he pitched seven innings and allowed eight runs on 12 hits for the Golden Eagles. He also picked up five strikeouts and walked two.

The Golden Eagles trailed early, 2-0 but answered back in the fourth with three RBIs by Alam, catcher Noe Garcia and Sandoval to take a 3-2 lead.

The Golden Eagles scored their final run in the sixth after Alam scored on a fielder’s choice.

The Cougars, on the other hand, scored six unanswered runs to seal their 12-4 victory.

The series shifted to Reeder Field for a Sunday doubleheader, as the Golden Eagles settled for a split. They fell 11-5 in the first game, but rebounded late to win the second game 7-6.

Alec Daily started the first game and pitched well through the first four innings. However, Daily was taken out during the fifth inning due to an apparent arm injury. He lasted over four innings and gave up four runs (three earned) on five hits.

Micah Hee took the bump in the seven-inning nightcap and it was a rough start for him. Hee allowed six runs and 13 hits in five innings.The bullpen imploded as they allowed 10 walks, two hit-by-pitches and seven runs.

Down 6-3 heading into the sixth inning, the Golden Eagles took advantage of the Cougars’ shaky defense, as they tallied four runs for a 7-6 lead.

A perfect seventh inning by reliever Zachary Grande sealed the victory for the “Black and Gold” crew.

The Golden Eagles now have an overall record of 16-21.  They are currently in eighth place of the CCAA with a 15-18 record and remain two games back of the final playoff spot with eight games left this season.

They have a big task on their hands this week as they battle top seed UC San Diego Tritons in a four-game split-site series starting Thursday at Reeder Field at 6 p.m.