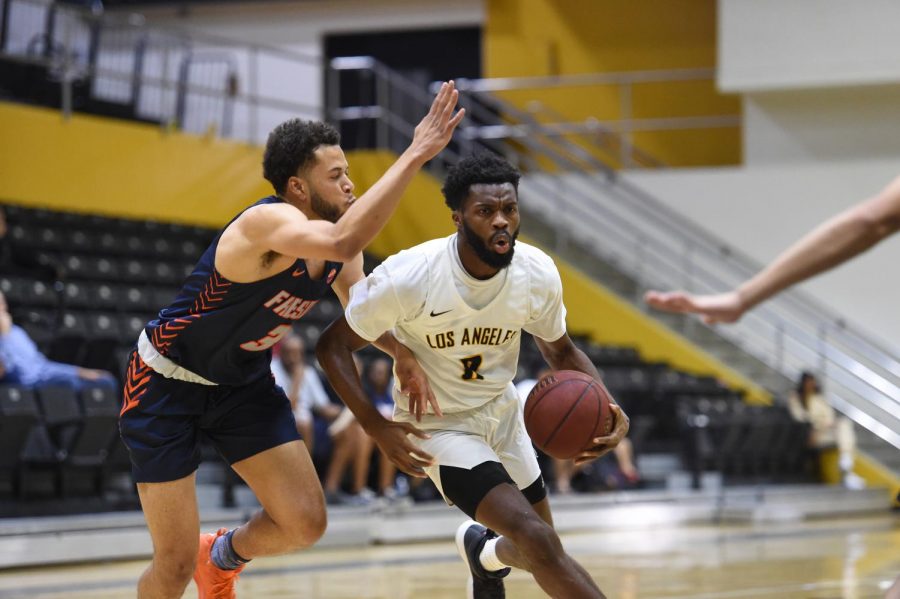 Michael-Isaiah Ajiboye takes control of the ball while maneuvering against a Fresno Pacific player.

Guard Shacquille Dawkins showed he is comfortable in the big-time moments. The Golden Eagles were down by one point when Dawkins went to the free-throw line. Dawkins made both free throws, giving Cal State LA the 84-83 lead with 23.7 seconds left to play.

Fresno Pacific then attempted to score, but the hard-nosed defense of Cal State LA forced a timeout with 12.1 seconds left. On an inbounds play, Fresno Pacific attempted to drive past Dawkins but he stole the ball, and passed it to the open Michael-Isaiah Ajiboye.

Ajiboye was intentionally fouled and iced the game at the line by making two free throws, giving the Golden Eagles an 86-83 lead. Fresno Pacific had a chance to tie it, but the Sunbirds’ guard Sean Nealon-Lino fell short on his three-point attempt.

“I’ve been struggling this year, and I felt like I owed it to my team to knock [the free throws] down … I was just trying to play hard defense without fouling. Once he exposed the ball I just went for it,” said Dawkins about the final minutes of game action.

The depth of the Golden Eagles’ roster continues to be the story at this early point in the season. Ja’Sean Lewis joined Bailey Kikuchi and Jordan Rogers on the bench due to injury.

However, Head Coach Jim Saia is optimistic he will get some of his players back soon. “Hopefully Ja’Sean and hopefully Bailey,” said Saia on potential injury returns for Thursday’s game.

That game will take on some added importance as the Golden Eagles face their first conference opponent at Cal State East Bay in Hayward.

Cal State LA will focus on its defense against the Pioneers, as last year the Golden Eagles lost to them on a buzzer beater, according to Saia. He said: “They’re a tough physical team, and they run offense. They’re a very, very good team. We’ll have to defend on the road and do a better job.”