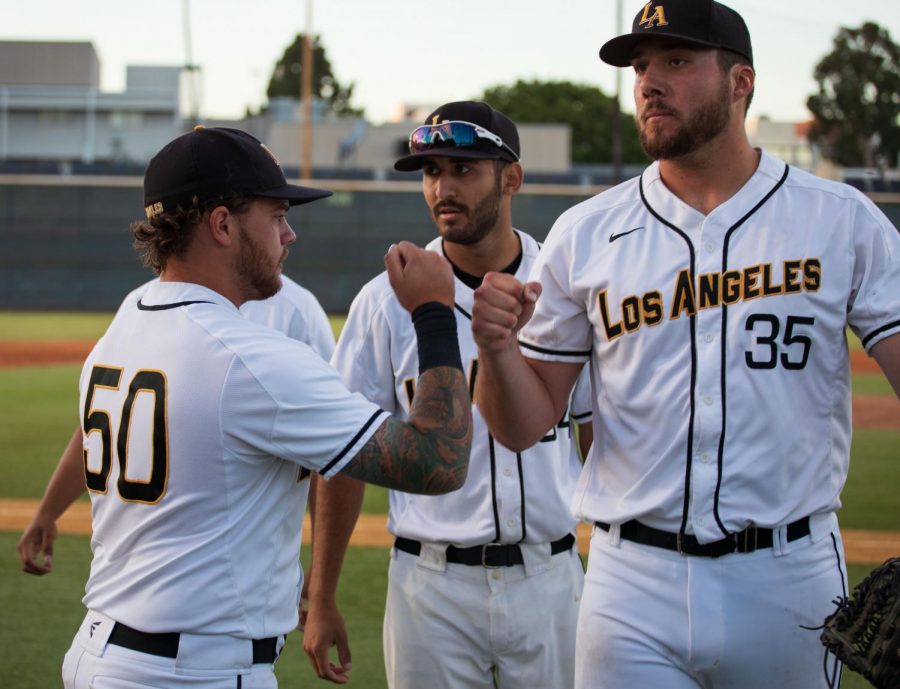 Austin Nazabal (35) is greeted by his teammate, Jackson Bond (50) after his start against the UCSD Tritons on Thursday.

The first two games at Reeder Field had identical scores of 11-5, but the Golden Eagles came out on top only once, as they won the series opener on Thursday.

Austin Nazabal started the opener and pitched 4.2 innings and allowed five runs (two earned) on seven hits. He also walked one and struck out six in just his second start of the season.

“I could have executed better,” said Nazabal. “I left some pitches up and got hurt, but overall I think my start went well.”

Nick Moisant relieved Nazabal in the fifth and delivered an outstanding performance. In the final 4.1 innings, Moisant struck out 10 batters and allowed only one hit.

This was Moisant’s fourth relief appearance of the season and he felt comfortable coming out of the bullpen.

“It was natural to me. During junior college and last year, I came out of the bullpen a lot,” said Moisant.

Both pitchers combined to strike out 16 batters, the most in a game for Cal State LA this season.

With the game tied at 5-5 going into the bottom of the seventh, the Golden Eagles’ bats came alive as they tallied six runs and hung on to win, 11-5.

In the second game, Golden Eagles were tied 3-3 heading into the eighth inning, but ultimately fell to the Tritons, 11-5.

Saxon Andross took the mound and delivered a quality start as he only surrendered one run in five innings.

It was a different story for the bullpen as they struggled with command. They combined for nine walks, which ultimately translated to 10 runs.

The Golden Eagles looked to bounce back as the series shifted to the Tritons Ballpark in La Jolla, CA for the final two games, where a milestone was on the horizon for Golden Eagles’ head coach Vince Beringhele.

The bats came alive for the final four innings, as the Golden Eagles tallied nine runs in that span.

The bullpen held it down for the final three innings, only allowing two runs on two hits.

In his 12th year as the head coach, Coach Beringhele hit a career milestone, earning his 300th win on Saturday.

The Golden Eagles sent out Micah Hee in the finale and he pitched over six innings. He allowed three runs on six hits and struck out seven.

Trailing 2-0 into the sixth, Gordon homered the fourth time that day, as he cut Cal State LA’s deficit in half.

The “Black and Gold” crew took a 3-2 lead in the seventh, behind RBIs from Sandoval and Alam.

The Golden Eagles were two outs away from winning the series against against UCSD when Alec Daily came in to relieve Hee.

The Tritons had other plans, however, as they tied the game and delivered a crushing walk-off grand slam to shock the Golden Eagles and win the finale, 7-3.

After the series split, the Golden Eagles have an overall record of 18-23 and they are currently in eighth place of the CCAA with a 17-20 record.

With four games remaining, the Golden Eagles are two games out of the final playoff spot, behind the Sonoma State Seawolves and Cal Poly Pomona Broncos.

Cal State LA will be back in action on Friday as they begin a four-game home series against the Cal State East Bay Pioneers.