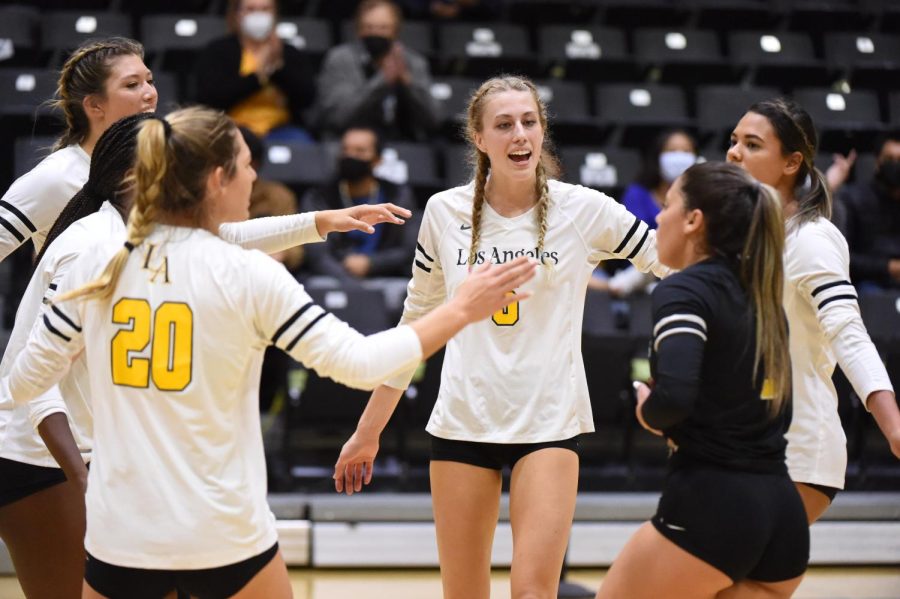 Cal State LA women's volleyball team give themselves a pat on the back.

The Golden Eagles women’s volleyball team continued a winning streak as they defeated the Cal State San Marcos Cougars and the Cal State East Bay Pioneers each by 3-0 over the weekend, bringing Cal State LA’s overall record to 14-5 and their divisional record to 9-2.

In the early set of Friday’s game, the Golden Eagles and the Cougars battled back and forth with solid defensive plays from Cal State LA’s libero Jeshmarie Suarez and setter Eliza Cannon. Alejandra Negron, who plays both outside hitter and opposite position, helped the Eagles keep up pace with the Cougars. A kill from Emily Elliott, who plays opposite, increased their lead to 14-11. Cannon hit an ace to end the set, giving Cal State LA a 25-17 victory.

Outside hitter Karla Santos delivered the first point for the Golden Eagles during the second set and helped give them an early lead of 7-1. Offensive plays from Cannon, Santos and Elliott brought their lead up to 16-10. The Cougars rallied back to tie the game at 19-19. Ultimately, the Golden Eagles squeaked out a 25-22 victory thanks to the kills by Cannon and Elliott.

After going down a couple points during the third set, the Golden Eagles called an early timeout. They seemingly recovered and got out to a 9-7 lead. From then on, the Eagles went on to take a huge lead against the Cougars, eventually forcing a 24-15 match point. However, the Cougars did not go down without a fight and managed to rally five straight points towards the end. A kill from Santos marked the end of the game with a  final score of 25-20.

Coming off their win against San Marcos, the Golden Eagles brought that same confidence into their next game against the East Bay Pioneers. The Golden Eagles battled back and forth against the Pioneers in the first set, but the Eagles soon started to take control with a 7-4 lead.

Cal State LA’s middle blocker Daisy Crenshaw suffered an injury on the court during the first set and was replaced by Haley Roundtree. The Pioneers drew closer to the Golden Eagles by scoring two points, but the Eagles were able to bounce back and regain a 15-8 lead. They went on to win the first set 25-15.

The beginning of the second set was no different from the first, as both teams kept within striking distance of each other. The offensive kills by Santos and Roundtree gave  the Eagles a 10-8 lead. Cal State LA maintained control for the rest of the set and won 25-13.

The Golden Eagles had to keep fighting back during the third set, as a majority of it was led by the Pioneers. The Eagles found themselves down by three with a score of 16-19. After a quick timeout followed by kills from Cannon and Santos and an attack error from the Pioneers, the Golden Eagles led 20-19.

The Pioneers followed up with an additional point to tie the game at 20-20. The tie didn’t last long as Shelby Grubbs scored two key kills, giving the Eagles a two point advantage. The remaining three points resulted from a kill by Elliott, an ace from Cannon and one more final kill by Elliott to cement the sweep.

Crimes commented on how the team “stepped up” during the first set of the second game after Crenshaw suffered an injury. During the third set against the Pioneers, Crimes recognized the need to “be a little more disciplined.” She said that after the timeout, the team realized they needed to focus on themselves, and they shifted accordingly.

The Cal State LA women’s volleyball team will return to action this weekend playing against the CSU San Bernardino Coyotes and the Cal Poly Pomona Broncos for the CCAA standings. Students can stream the game on the Cal State LA CCAA Network.

Correction: An earlier version of the story stated the scores stood at 15-2 and 10-2.