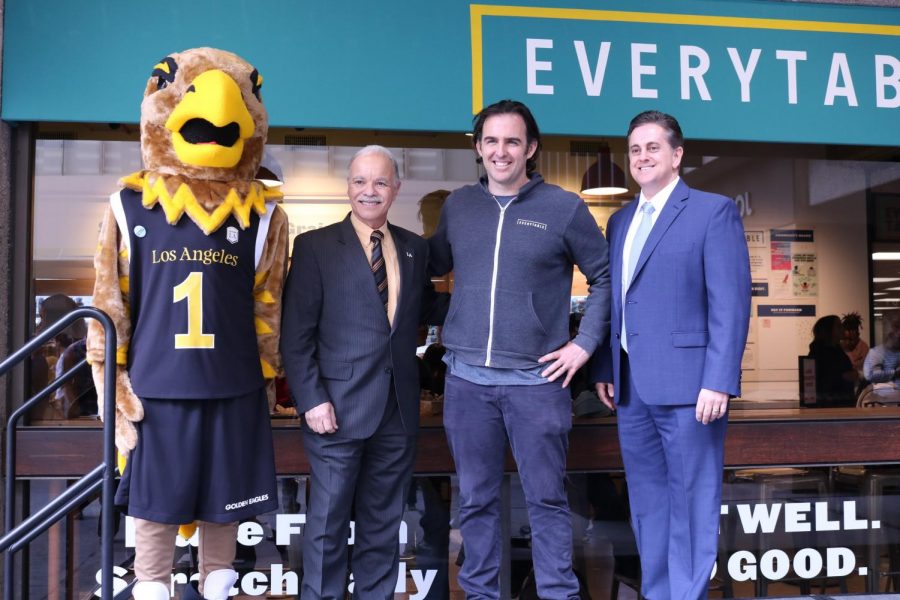 The latest produce-focused meal service on campus–Everytable–celebrated its grand opening Monday, Jan. 28. Those in attendance included: President William A. Covino, Vice President Jose Gomez, and Everytable CEO Sam Polk, who presented this new and healthy alternative to students and faculty.

Vice President Jose Gomez, who served as emcee for the event, expressed his support for Everytable’s new campus location.

“Everytable is for everyone of us. For you, our students, faculty and staff, and for the communities that we serve. This restaurant offers everything we need: healthy food, low prices, a beautiful space and great music,” Gomez continued. “Cal State LA and Everytable serves the needs of the community by fighting for food justice; Yes, this food fights.”

Cal State LA, which is the third largest college campus in Los Angeles, was chosen in-part due to the leadership of Gomez and the president of the University.

“They resonated with the concept and they wanted to bring food that was both affordable and convenient to the students of Cal State Los Angeles,” said Everytable CEO Sam Polk.

The opening of the new location is a result of the University’s attempt to tackle food insecurity within the student body. Polk explained that his goal is to ease students’ daily food concerns. According to Polk, “college students certainly experience the lack of healthy food.”

“Our hope is to bring this same food and the same ethos to the surrounding community and support the students and their projects,” said Polk.

The money Everytable pays to rent the storefront space in the Kennedy Library goes into a charitable fund which is distributed to student-led initiatives that focus on food justice issues in the surrounding campus community.

The organization has also implemented a “Pay it Forward Program.” According to Everytable’s Store Manager Beatrice Ackres, the program allows anyone who is short on funds to take a post-it note, located at the store’s entrance, and turn it in to the cashier who will then allow them to choose any bowl on the menu free of charge. These post-it notes, which help to provide someone with a free entree, are provided to any customer who chooses to purchase a bowl in advance. However, this does not include drinks or additional snack purchases.

“Our students come first; their well-being comes first,” said President Covino as he addressed the crowd outside the Kennedy Library. “We know that healthy food is an important element for success, but we also know that the price pushes it beyond the budget of a college student. We believe that healthy food is a human right and we are behind the food justice movement in a big, big way.”

Some students expressed their excitement to have a new dining option on campus. “I’m so happy to have Everytable because I like eating healthy, and healthy choices are better than fast food,” said Cal State LA student Melissa.

For students who are still uncertain about Everytable, there are menu items like the spaghetti squash and meatballs or the teriyaki chicken. Both of which have “flew off” the shelves according to the student ambassadors. Everytable estimates that over 1500 prepared meals will sell before the end of each business day.

This is the sixth storefront that Everytable has opened; they plan to open eight more storefronts this year throughout Los Angeles. The success of the Cal State LA location has helped move plans forward to open further college storefronts at other Cal State campuses as well as the University of California, Los Angeles.