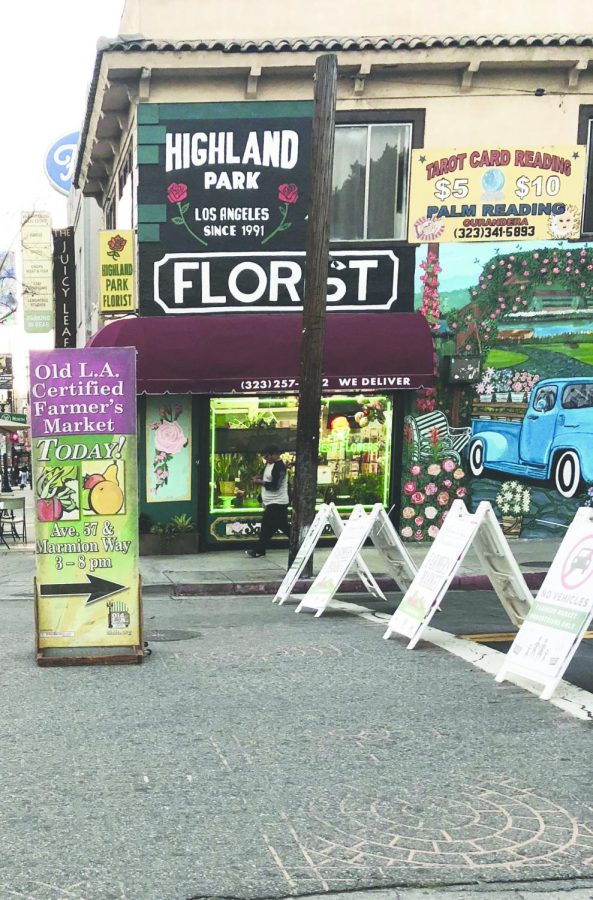 A sign points the way to the Highland Park farmers market. Photo by Martha Nerio.

Now, it offers produce from eight farmers, a sushi vendor and just one stall with tacos.

Vendors at the market, which is across the street from the Gold Line’s Highland Park station, say the changing demographics of customers have also changed the items sold and the overall vibe of the market – for better and worse.

A taco vendor officially dropped out recently but there are plans to bring in another and La Pupusa Feliz sells tacos, bacon-wrapped hot dogs and other items at the market, according to Misty Iwatsu, executive director of the North Figueroa Association, Highland Park’s business improvement district.

Luis Reynosa, who has been a vendor for nine years, said his regulars were mostly Latino and now there are fewer folks from that community.

“We sell our pricier foods more often. People are eating healthier and people do not come as often,” he said.

Some vendors are ambivalent about the changes. Adriana Banuelos, who runs the only tamale stall at the market, has been selling at the market for 18 years. Banuelos said while the neighborhood has become nicer aesthetically with the addition of new and bigger businesses, it hasn’t seemed to affect her business and the only reason she increased her prices – the few times that she did – was because “gas prices went up.”

Aside from food, the market offers clothing, blade sharpening and jewelry, among other things. The owner of Plant Food for People, a food truck that sold vegan tacos nearby in recent years, said they left a while back to start transitioning to packaged and wholesale foods.

Sarah Pinedo and Cannie Cano, sisters who work together at the farmers market, sell knick-knacks such as jewelry and bigger items like dining sets.

The sisters were raised in Highland Park and are now raising their children in the neighborhood. Pinedo said that they’re happy with the renewed economic vitality of the neighborhood and are thankful to have managed to hold onto long-term customers. She added, “Locals are now bringing their dogs to the market and it is so cute.”

The Highland Park market happens every week on Marmion Way and Avenue 57.