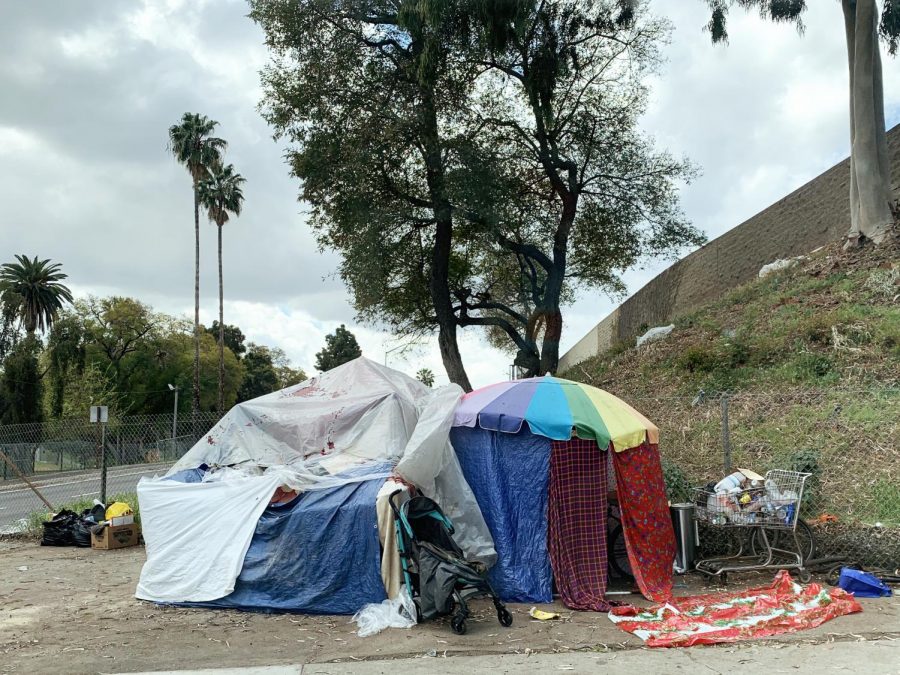 With all the issues that Boyle Heights residents battle — rising costs of housing, gentrification’s impact on small businesses, and now, 28 confirmed cases of the coronavirus in the neighborhood — homelessness sometimes gets lost in the mix.

But residents such as Desire Sanchez say it’s an issue that is on the minds of people with small children a lot.

To her, folks in the neighborhood experiencing homelessness are not just reminders of the need for more affordable housing, but they represent a public safety issue.

“It creates a sense of fear. I don’t come to park with my kids without my husband,” Sanchez said. “And it’s not necessarily all the homeless [folks who] cause fear, just the ones addicted to drugs.”

Substance abuse is just one of many issues that can lead to homelessness and advocates of people experiencing homelessness say that understanding the various issues can help people overcome their own concerns and correct perceptions.

“Insufficient income and lack of affordable housing are the leading causes of homelessness,” according to the National Law Center on Homelessness and Poverty.

Among people who are single, the top causes of homelessness are the lack of affordable housing, unemployment, poverty, mental illness and the lack of treatment for that, and substance abuse and the lack of services for that, according to a fact-sheet by the NLCHP that cites an annual survey by the U.S. Conference of Mayors.

Debra Molina, a lifelong Boyle Heights resident, said she suspects that any alcohol or substance abuse among people experiencing homelessness stems from what made them lose their homes in the first place such as losing their jobs. Such hardships may lead them to “numb” the pain.

That could make people reluctant to donate money to them, she added, so it ends up being a vicious cycle.

Many area residents can’t afford to donate and even if they can, they may feel “like the money all goes to drinking or just trying to be numb about the situation, where they just pass out and sleep all day.”

Similar perceptions may affect taxpayers and potential donors to non-profits that could be doing more to finding temporary housing and other resources for people experiencing homelessness.

Still, public safety may be affected in some areas by homelessness rates.

“Crimes involving the homeless — whether as suspects, victims, or both — rose by 52 percent,” according to a Community News story late last year.

“A lot of calls” received in the Hollenbeck Community Police Station in Boyle Heights are related to homelessness, according to Arthur Gallegos, a Los Angeles Police Department assistant watch commander. At the same time, he added, the police don’t assume most people are in fear of people experiencing homelessness.

“It’s not necessarily a sense of fear but more of a concern,” he said, adding that some community members call wanting to help.

He added that the police station has a designated unit related to homelessness that not only enforces conduct-related rules but also works with sanitation and cleanup to improve the neighborhood.