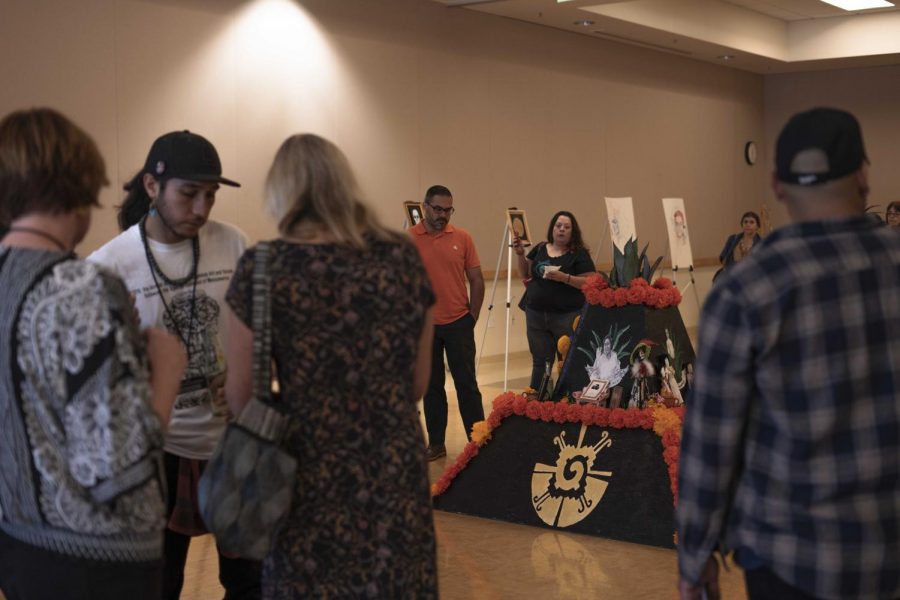 Hosted by the Art History Society of Cal State L.A. a gallery of various works of art was available to those in attendance of the symposium in honor of Miguel Loen-Poertilla last Saturday at the University Student-Union.

A minute of silence was held for Mexican historian and anthropologist Miguel León-Portilla at the “1519, the Arrival of Strangers: Indigenous Art and Voices” three-day symposium.

León-Portilla was a prominent scholar on the language and culture of the Aztecs. The Art History Society (AHS) and the Getty Research Institute collaborated to make the symposium happen. The symposium’s first and second days occurred at the Getty Center and closed at Cal State LA’s Golden Eagle Ballroom.

The AHS also created a small art exhibit that featured works from previous Cal State LA alumni, current students and artists who submitted their works of art via online submission.

During the AHS symposium, the Tlamatini award was presented to Dr. León-Portilla. The word “tlamatini” is a Nahua word that translates to a “wise person” or “teacher.”

The Tlamatini award was created by Cal State LA to honor important and brilliant scholars of Central America, according to Manuel Aguilar-Moreno, a professor at Cal State LA. This symposium highlighted the cultural, historical and artistic impacts and achievements of the indigenous people of New Spain.

The award was accepted by Patrick Johansson; historian, former student and friend to León-Portilla, himself.

Marisa León-Portilla, daughter of Dr. León-Portilla, was scheduled to attend the event, but due to her father’s passing, she was not able to fly in. Still, through Periscope, a video live streaming app, she watched the award as it was accepted by Johansson.

Flabiola Garcia Rubio, Mexican Consul for Academic and Educational Affairs, conveyed León-Portilla’s daughter’s speech to the crowd on her behalf.

“Let me thank you again on behalf of my father for this meaningful and precious recognition…as his daughter, I receive this award with love for him,” Rubio read.

Baltazar Brito Guadarrama, a former student of León-Portilla, recognized his work. “Miguel, is now our ‘living legend.’ These are not my words, rather it was the Library Congress of the United States,” said Guadarrama in a speech translated from Spanish.