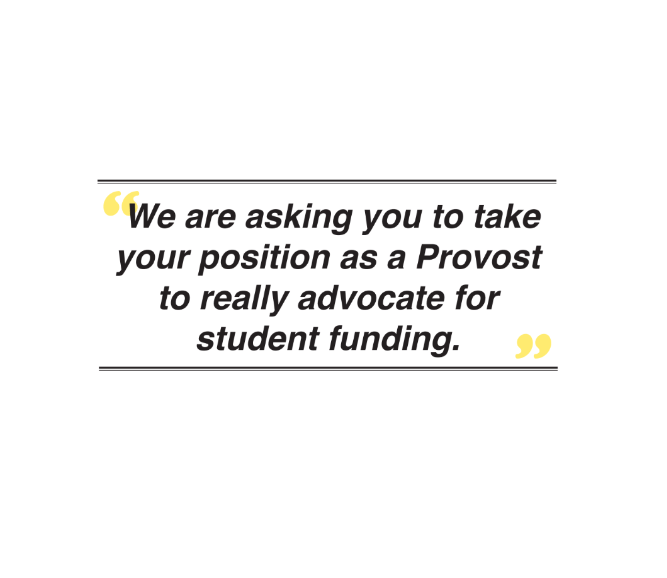 Last Thursday at an ASI board meeting, Golden Eagle Justice presented Provost Mahoney with a petition containing “over a thousand signatures” that critique the job that President Covino, Provost Mahoney, and Vice Provost Enders are doing in regard to listening to student’s comments and concerns.

Mahoney brought up the principles of having a “new holistic admission process.” According to her, by decreasing the amount of transfer students being accepted, administration will have control on the overall enrollment of students.

The Golden Eagle Justice petition was initially intended to inform community and staff of what is going on. They believe that the impaction proposal information has not been as accessible as it should be. They also asking the administration to consider an alternative, which is a one-year moratorium.

Mahoney provided her opinion on the principle of the one year moratorium.

“A one year moratorium would require the next two years; our only ability to control that overall number, so that we don’t get bigger than the 28,000 that we had last fall, is to reduce the transfer class.”

However, this did not ease the concerns of many in attendance. One student approached and sat next to Provost Mahoney to address her.

Mahoney stated that President Covino and herself have been listening to the students. According to her, the best way for them to create change is within the system, “even if you are agitating for change.” She reassured that Covino had gone directly to Sacramento to ask for more than the two percent that they have been awarded as permanent state funding.

“A total of 300 million was allotted, which was the most a California governor has proposed in a very long time,” said ASI president Nia Johnson.

Nia Johnson, alongside her ASI team, has informed Covino that they are representing the student voices. Prior to the impaction hearing, Johnson proposed to Covino that students should have a larger seat at the table. At that moment, Covino, according to Johnson, said that was a viable option. However, after the hearing, Covino rejected the proposal. Johnson is currently waiting for an email response that would clarify whether her proposal will or will not be accepted.

At the board meeting, Johnson was asked to explain ASI’s stance on the concept of Impaction.