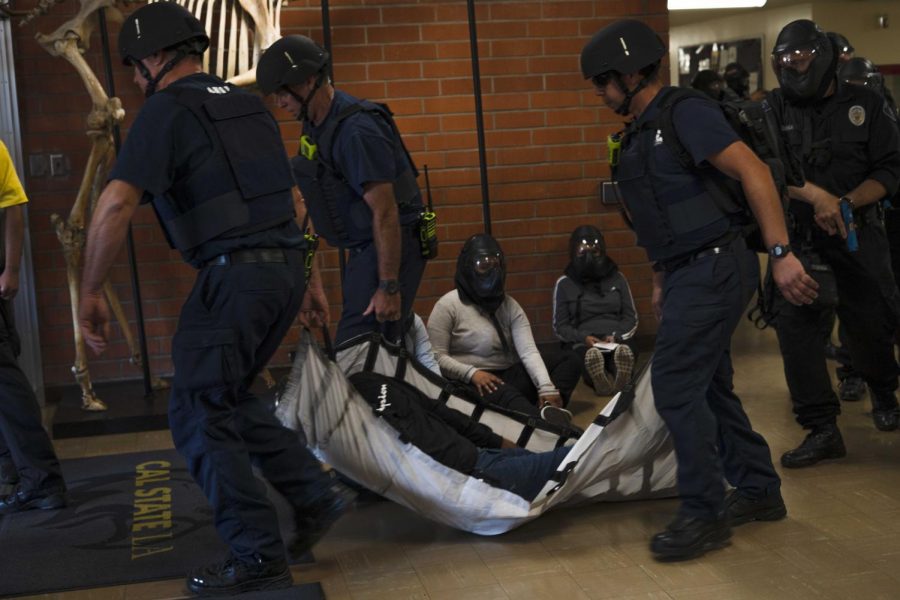 Fire and Paramedics quickly getting the wounded to safety during an active shooter drill that took place at Cal State L.A. in the Biological Sciences building this past Wednesday.

Gunshots and screams were heard at Cal State LA. First responders were dragging bodies out of the biological sciences building, however, it was a drill.

According to Sergeant Michael Harding, a 32-year veteran of the LA County Sheriff’s Department, the drill was scripted.

Despite thorough planning, personnel such as firefighters and officers, who underwent training, did not know what to expect as the drill unfolded. They communicated and mobilized as if the situation was real. Non-lethal projectiles known as “simunition” were used to produce the same loud popping noise as their lethal counterparts.

“We want our officers to kind of get a feel of how it’s going to be,” said Cal State LA Director of Public Safety and Interim Chief of Police Larry Bohannon.

As part of the drill, first responders coordinated to take out three active shooters, including simulated explosive devices. Personnel acted as active shooters while some student volunteers from the Criminal Justice Student Association Club played the role of victims by screaming for help and informing officers of the “injuries” they sustained.

Club member Alejandro Gonzalez was one of those volunteers.

“A lot of us enjoyed it. I speak for most of the club members, it was fun at the end of the day,” he said.

Cal State LA standard procedure dictates that golden eagle text alerts are automatically sent out to those enrolled on their Mycalstatela account, notifying students and staff on, not only drills, but real emergencies.

Sergeant Harding encouraged everyone to learn the “Run.Hide.Fight.” method: running away to safety, hiding in a safe place that’s ideally barricaded and provides cover if running is too risky. If the former two are not an option, one can fight the shooter as an absolute last resort.

Harding provides a lecture called, “Surviving an Active Shooter” to groups of 10 or up to 1000 people. He implored civilians to take advantage of the two to four hour service and watch videos on YouTube about behavioral and threat analysis.

“It is absolutely free,” said Harding when asked about the cost. “We think it’s an important service we provide to the community; therefore, we provide it free of charge.”

For more information on active shooters, visit the Sheriff Department’s website at lasd.org/active-shooter or any inquiries about the “Surviving an Active Shooter” lecture may be sent to [email protected]