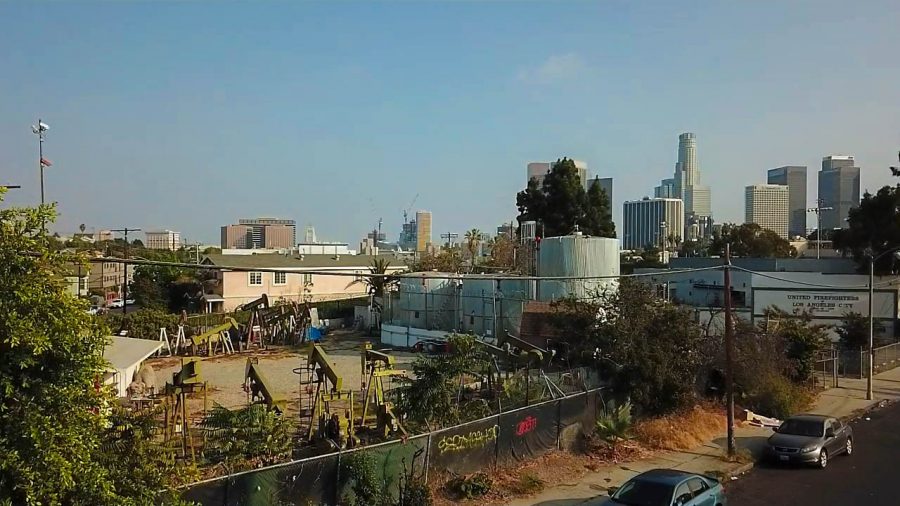 That’s partly why the county’s Board of Supervisors took action on the issue at a recent meeting.

They unanimously approved a motion in late September by supervisors Mark Ridley-Thomas and Janice Hahn to move toward a “Just Transition” to clean energy by creating a strategy for preparing an “able workforce” to clean up old fossil fuel infrastructure in a manner that promotes public health and safety. The strategy should be presented to the Board of Supervisors within 120 days.

“All aspects of any ‘Just Transition’ must treat both the environment and the workforce as coequal goals,” she said at the meeting.

Various county departments, including the Chief Sustainability Office and the Departments of Public Works and Regional Planning, will collaborate on the effort.

The county adopted a code effectively banning drilling in 2016 and has taken other steps since then to address various environmental concerns like energy use, conservation, reduction of pollution, recycling, and facility design.

In the motion, Ridley-Thomas called out the California Geologic Energy Management Division: “CalGEM, has not aggressively monitored drilling operations to ensure that all idle wells meet the requirement for abandonment following two years of inactivity.”

CalGEM officials referred to their website for details in an email.

“Since 1977, CalGEM has plugged and abandoned about 1,400 wells [statewide] at a cost of $29.5 million,” according to the site. “CalGEM has taken multiple steps to mitigate such potential hazards with ground-breaking legislation (Assembly Bill 2729, Williams, 2016) and development of rigorous regulations.”

Active oil wells in the county are marked green and idle ones are red. Data visualization by Jathniel Coronado using data provided by the California Geologic Energy Management Division.

A spokesman for the agency told the L.A. Times in March, “The issue of operators either going defunct without informing [the state] or simply ignoring orders is a long-standing issue” and that the agency would like to do “a full-blown audit” but does not have the resources.

“The Board’s motion recognizes neither CalGEM nor the County currently requires that idle wells (wells that are not currently producing oil) be plugged after a set amount of time,” Bianca Siegl, deputy director of advance planning in the county’s Department of Regional Planning, wrote in an email.

As a consequence, idle wells can remain unused for many years and may have leaks or damage that go unnoticed. In California, idle wells are defined as wells that have effectively not been used for two years.

The board’s motion instructs county departments to identify priority wells that should be properly closed and abandoned and to have county staffers identify funding strategies to support permanent staff for the Office of Oil and Gas to support the “Just Transition” effort.

The county’s hundreds of idle oil and gas wells create a “serious risk” to the community’s health, environment and local budget, according to Woody Hastings, the energy program manager of the Climate Center, a group that advocates to achieve net-negative emissions and “resilient communities.”

“We need a highly skilled and trained workforce to clean up old fossil fuel infrastructure in a manner that promotes public health and safety and helps address the climate crisis,” Hastings wrote in public comments submitted on the issue. “We all deserve a healthy and safe workplace, neighborhood and environment.”

He said the Climate Center supports the motion in solidarity with “environmental advocates, labor unions and frontline communities” to help reduce fossil fuels in the county and to help progress toward a more “clean and resilient energy.”

The transition may require a more in-depth examination of policies belonging to neighboring counties in order to ensure “the utilization of highly skilled and qualified workers is maximized across other areas of construction.”

This effort that led to the “Just Transition” motion dates back to March 2016, when the Board of Supervisors adopted the “Proactive Planning and Enforcement of Oil and Gas Facilities Operating in Unincorporated Los Angeles County” policy.

This required the county’s code to be updated to ensure that no drilling would be allowed in any zone without appropriate environmental analysis and permitting requirements within the unincorporated areas.

The motion also established an “Oil and Gas Strike Team,” made up of representatives from various county departments — such as Public Works, Regional Planning, Public Health, and Fire — and industry experts who visit and assess all oil fields within the unincorporated areas of the county to ensure that operations are being performed in a safe way.

In a report issued on Sept. 26, 2017, the Strike Team proposed policy recommendations that are now guiding the development of the “Just Transition” motion and recommended further evaluation of the abandonment of long idle wells.