Lackluster Year for the Boys in Gold

After falling short of the playoffs, the Golden Eagles look ahead to the future. 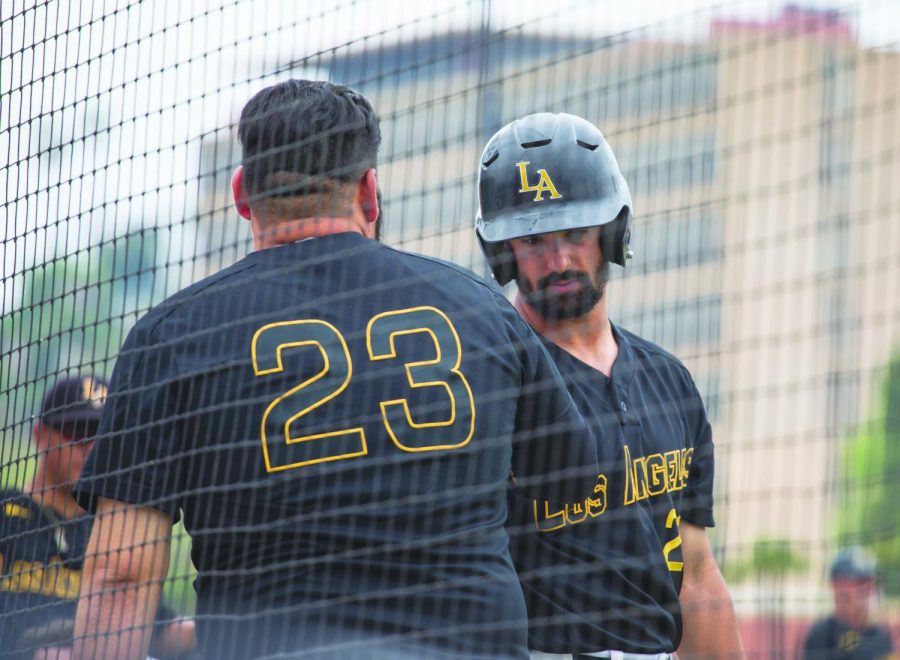 After finishing eighth in the conference this season, the Golden Eagles will miss the playoffs for the first time since 2016. Pictured: (left) third baseman Anthony Moreno (23) and (right) right fielder Adam Gordon (29) meet at home plate.

It was an up and down year for the Cal State LA men’s baseball team during the 2019 season.

Vince Beringhele returned for his twelfth season as the Golden Eagles head coach. His team was picked to finish fifth in the California Collegiate Athletic Association (CCAA) in a preseason poll.

However, the team underperformed and ended up with an 19-26 mark and finished eighth in the conference with a 18-23 record.

Cal State LA got off to a cold start as they lost nine of their first 12 games. They began conference play with a 1-6 record, which featured a four-game sweep by the Cal State Monterey Bay Otters.

After the series against the Otters, the “Boys in Gold” began to turn things around. They went 10-3 in their next 13 games, which included an eight-game winning streak.

However, despite this successful mid-season run, the Golden Eagles’ fortunes took an opposite turn.

In the final 21 games, the Golden Eagles posted a dismal record of 7-14 and the pitching staff had an earned run average (ERA) of 6.09.

Throughout the season’s lengthy schedule, fatigue and injuries are bound to happen, and that was the case for Cal State LA. The Golden Eagles lost a majority of their pitching rotation down the stretch, which included Saxon Andross, Alec Daily and Micah Hee.

Daily had the third most strikeouts in the league (56), while Andross was 12th in the conference in ERA (3.90). Hee led the team in wins with five.

Aside from their pitching injuries, Cal State LA was one of the top offensive teams in the conference.

The “Boys in Gold” finished fifth in the conference in batting with a .287 average and were tied for sixth in runs scored (244). They also had the second-most home runs in the CCAA (27).

One of the newest additions to the Golden Eagles was shortstop Tyler Odekirk, who transferred to Cal State LA from University of San Diego prior to the 2019 season. In his first season with the “G.Es”, Odekirk led the team in batting (.337) hits (58) and runs scored (48).

Right fielder Adam Gordon had the most home runs (9) and runs batted in (43) for Cal State LA.

A career milestone was achieved on April 20, as the Golden Eagles defeated University of California (UC) San Diego Tritons to secure Beringhele’s 300th win with the program.

In the doubleheader that day, Gordon crushed four home runs against the Tritons (three in game one and one in game two).

Despite missing the playoffs this season, Coach Beringhele looks ahead for the future.

“Hopefully we can gather more depth next season and have more pitching, and not have as injury-prone of a season like this year,” said Beringhele.

With the departure of the seniors, the Cal State LA baseball program will return with a number of new faces. For Beringhele and his staff, recruiting never ends and they will look to revamp the baseball program to contend for next season.

“We’re not going to rebuild, we’re going to recruit and reload,” said Beringhele. “We want to be back in the CCAA Tournament next year and be fighting for championship.”

With another season in the books, the Golden Eagles look ahead to the future and will return to the diamond in 2020.