Learning from the Pros 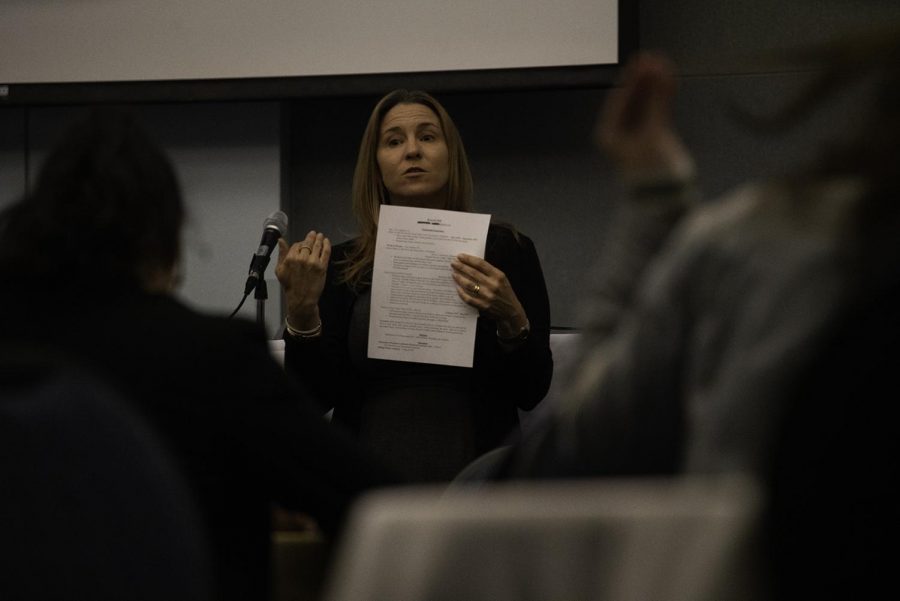 Nina O’ Brien, the associate professor of Communication Studies and Management of Cal State LA, goes over a resume workshop at the Connect the Dots event.

What exactly are companies looking for in employees? It’s a daunting question when filling out resumes and applications.

Cal State LA students got the chance to network with industry professionals and find out exactly what they need to make it during “Connect the Dots” on Friday. The day-long event saw students come to the Golden Eagle ballrooms for workshops such as resume writing, advice from alumni and a mixer.

Guest speaker Sean Gilroy expressed the importance of not only being honest on your resume, but keeping it concise.

When looking at resumes, “I begin to roll my eyes once I saw three, four, five pages,” said Gilroy. He added that it’s great to see all the projects someone’s worked on, but when looking at hundreds of resumes, a single page is ideal.

TVF major Manuel Hernandez learned that the resume is only the first step to getting your foot in the door.

“The resume is your opportunity to get an interview for the job,” said Hernandez. “You’re not going to get a job with just the resume by itself.”

Gilroy also stressed making sure that making your one-page resume should also leave no room for error. Typos will send it straight to the recycling bin and how you structure it will tell your employer what you think is most important about you.

Attendees were moved to another ballroom where they could ask direct questions to professionals face-to-face. Over a dozen tables, featuring a wide range of professions, filled the room as students shifted from table to table; learning about professions they never would have considered.

“I wouldn’t have walked to the journalism [table]… [it’s] really interesting because it showed different aspects of the industry,” said TVF major James Rincon.

Rincon added that he took away some valuable networking tips from the journalism table.

“When you’re networking, don’t always ask them about their career. You can talk to them about normal things outside of that. Then you can build a relationship… if you’re just talking about your career, then nothing is going to stick out about you,” said Rincon.

International student Elena Wang came to the event as a TVF major but hoped to get some insight as she’s thinking about a minor in theater.

“I’m brand new to the industry. Some of the producers from the theater [table] told me how to get auditions and the process of that,” said Wang.

When it came to actually applying, James Ham and Timothy Jordan of Insomniac Games talked with their table about just taking a chance.

“Every job I’ve applied to, I actually got because I applied for the job above that. I tried to fill in the job qualifications for that specific job,” said Jordan. “I applied as a senior and got hired as an associate.”

“Don’t be discouraged either. If you see something that says ‘five years experience’, ignore that and apply anyway. If you’re good enough, they’ll want you,” said Ham.

TVFM Chair Kristiina Hackel was happy to see students engaging with one another – even getting involved herself by starting conversations with them.

While she knows the TVF production classes have been one way for students to network, Hackel thought “the classroom setting isn’t always set up for these kind of networking conversations.”

She added, “Having something that is really dedicated to helping students find their pathway to professional careers is fantastic… this is what our students need.”