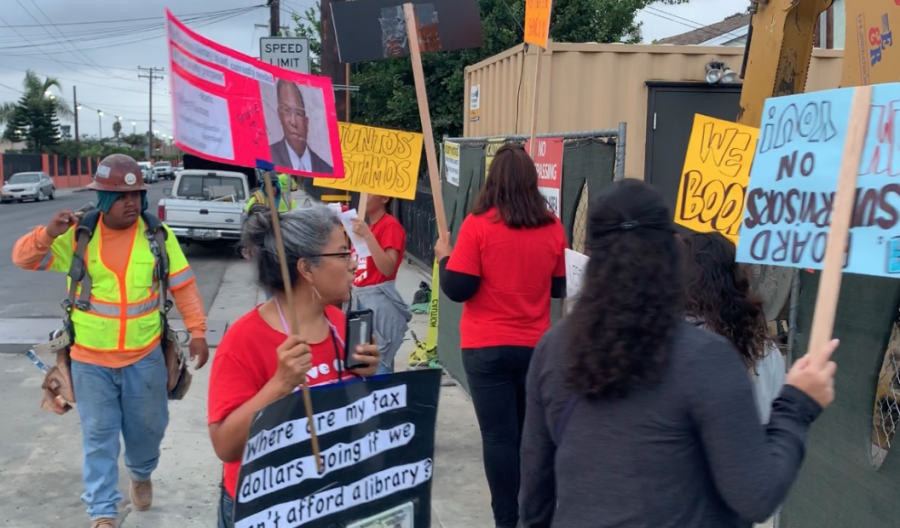 Protestors say they'll fight to keep the library at its original location.

It has been more than eight months since their library was shut down to make way for housing and Florence-Firestone area residents still feel the loss.

For kids in the neighborhood, it was a place to go after school. An escape from problems at home or a safe haven from bullies outside.

“I am a teacher but I owe the library so much,” Miramonte Elementary teacher Lorna Barnoya said. “I am worried, I am sad for my kids.”

A renovated library was initially planned on the first floor of the affordable housing project, according to representatives of “Juntos Florence-Firestone Together,” a group of neighborhood residents who spent several weeks recently staging protests in front of the construction site in an effort to pause the work.

Los Angeles County Supervisor Mark Ridley-Thomas, who represents the area as part of the 2nd District, could not be reached for comment despite calls and an email.

But on his county website, he describes what happened. “The initial plan was to incorporate a  library into the footprint of the affordable housing project. Ultimately, however, this was not viable,” it reads, adding, “Given the state of emergency around homelessness…we must also prioritize affordable housing.”

A Los Angeles County Department of Regional Planning document describing the project in 2017 said it would be restricted to households with incomes that are “low” and “very low:”  “The project will contain a new public library and 116 affordable housing units that will be restricted to low- and very low-income households (including family, seniors, and or special needs), plus one manager’s unit, for a total of 117 units.”

Proponents of the project also point to a new “express” library in a trailer-like structure in Roosevelt Park.

Some area residents say it’s a far cry from the 10,000-foot library and community room that had been described to them before they lent their support to the project.

Florence-Firestone is an unincorporated area of Los Angeles County where 30 percent of the population is considered below the poverty line, according to 2018 data from the U.S. Census Bureau.

Folks from the Juntos Florence-Firestone Together group said that they were not informed about the changes made.

The housing project has been in the works for the past three years, by AMCAL, a Multi-Housing Company, according to the Los Angeles County Department of Regional Planning.

“The $51-million project is seeking approximately $7 million in County funding,” according to Urbanize LA.

Some area residents said they were surprised to hear that the housing project was in the works three years ago. “Really, three years ago? I found out earlier this year—two weeks before the demolition of the library,” Anthony Marquez said in an email.

The Florence Library offered many resources such as after-school workshops, homework assistance, free printing, free internet access, family events, parenting tips and the opportunity to earn an accredited high school diploma. The express library seems to still offer many of the same services, according to its website, but neighborhood residents say the smaller space is not as inviting, so it seems to draw far fewer people.

Joan Zeta, a protestor who lives in the neighborhood, said the library contributed to her academic success when she was a student.

“The library helped me by teaching me how to be resourceful. If the library didn’t have a book I would request it and later get it. This skill was essential for when [I went] to college and couldn’t afford a book or materials,” she said.

The temporary library doesn’t come close to replacing the original, said Ashley Orona, a member of the Juntos Florence-Firestone Together group.

“People go to library not just for books but there’s a lot of resources, such as free internet, free printing, and there’s also a lot of workshops not only for kids but adults and seniors. Ever since it’s been relocated it’s not the same,” she said.

On his website, Ridley-Thomas said he hopes to find a solution that works: “Community input is important to me, so we shifted gears and have hired a real estate consultant to help us search for other suitable spaces  within the Florence Firestone area.”

Representatives of the Florence-Firestone group say they plan to keep protesting until the library is rebuilt in its original location.

This story was originally published in the Oct. 8 print edition of the University Times.