Students hold a vigil to honor the life of Nipsey Hussle. 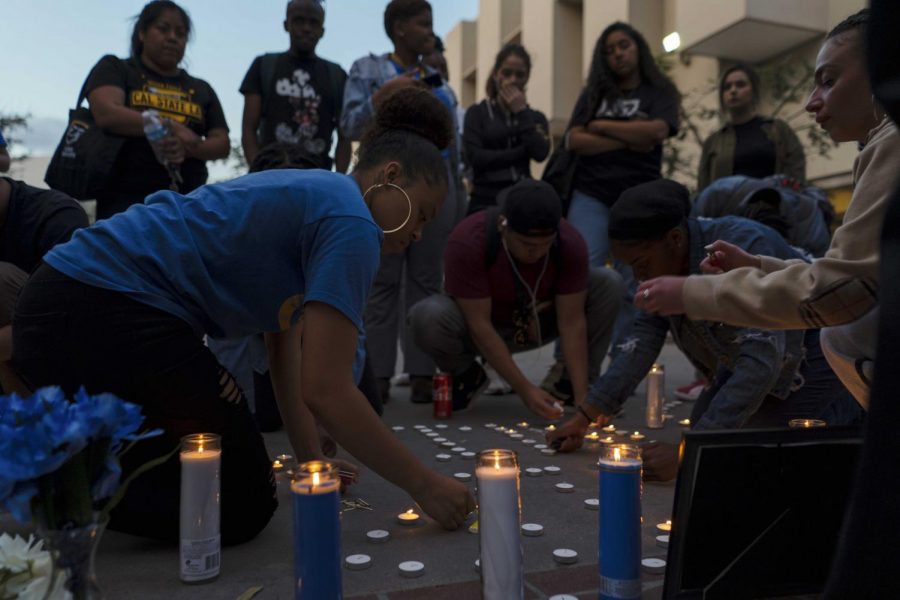 Accents of blue and white adorned the scene, from carnations in jars to candles spelling out Hussle’s name. A bright blue poster board with his picture in the center highlighted messages from mourners. One jotted phrase read “long live the neighborhood hero”. Another stated, “good looking out.”

Having grown up in an impoverished community filled with violence and struggle, Hussle’s music centered on the lessons and experiences, good and bad, of that time. Even after his music became successful, Hussle stayed local and supported the community he grew up in by opening a clothing store called The Marathon.

“Even though he’s a celebrity, Nipsey Hussle was always in the community,” said Ayzia Clowney, member of Black Student Union and organizer of the event. “He was very accessible, very approachable. He was in the hood every day where he grew up, so it was very touching.”

Student, Edgar Pedroza, reflected on the impact of losing Hussle, who was a role model to many in the community.

“He’s one of the great ones,and he’s no less immune to the type of systemic violence that goes on in those neighborhoods,” said Pedroza. “It doesn’t matter what you do, how smart you are, or how much prestige you got. You’re still affected by the same systems of oppression.”

As the sun went down and the candle lights flickered bright in the wind, students took turns sharing their connections to Hussle.

One student admired his authenticity and dedication to the South LA community.

“Now people will stop thinking of South Central or the hood as something that never prospers or grows or that there’s no love there, because he was the definition of all three of those things,” she said. “Thank you Nip, you helped give a voice to the voiceless. You taught everybody how to be a man when people didn’t even have a man to look out for them.”