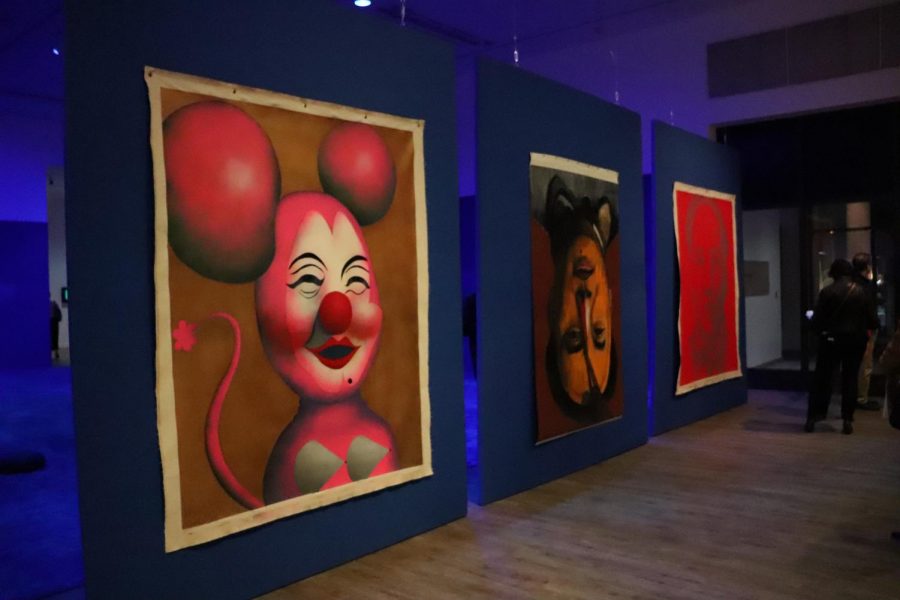 (From left to right) “Mini Mao,” “Mao is Coming,” and “Tinanamen Square Mao,” all by artist Tu-2, greet guests on their right as they walk into the Luckman Gallery.

The “I to i, Mind to Heart,” exhibit includes Tu-2’s Mao-ology, which merges Mao Zedong, a Chinese communist leader and the founder of the People’s Republic of China, with Mickey Mouse. It also includes 48 of the 108 of blue and silver portraits.

The portraits, displayed in what was referenced as the “blue room,” are done in silver pencil on blue paper. The portraits aimed to “reveal the interior qualities of their subjects,” according to the artist’s website. This part of the gallery was equipped with pillows and designed as a space where attendees could meditate.

The portraits are a product of meditation and according to Tu-2, the time it took him to complete a portrait varied from two to three hours or even a couple of days.

“Depends on how quiet, how deep my mind is,” Tu-2 said in an interview with the UT. “If my mind is clouded, the portrait will take longer to do, so each portrait [has] a different relationship with me.”

Tu-2 is a visual fine artist, whose works vary from drawing, painting, photography, documentary films and video. According to his website, Tu-2 was infatuated with faces from a young age, as he was influenced by Taiwanese puppet shows.

“‘The Green Mickey Mao’ is really fascinating. It’s like… kind of creepy and makes you look twice. It feels like it’s looking at you from the side… it’s really cool,” said Hannah Clause, a Cal State LA student, who visited the gallery with her sister.

Toki Ko, who does weekly meditation with Tu-2, was at the gallery with her partner, Chris Love.

“This exhibit is a place of solace, I think there’s like an energy that you feel when you step into the room,” said Ko.

She added, “There [have] been meditation practices that have been recognized in this gallery space and I’ve never really experienced that with other art exhibits. Even when you step into the room, you feel a peaceful vibration.”

In an interview with the UT, Tu-2 revealed why it was an honor to have his work displayed in the Luckman Gallery.

He referenced the Confucius statue on campus, saying,  “The statue, [was] actually donated by this mayor of Taipei… The mayor was actually my father’s mentor and boss. I discovered [this] later. So his spirit [is] here and my dad’s spirit is here, so it’s so amazing that I was able to… share my work in this University,”

The exhibition is open at the Luckman Gallery until March 14 and offers free admission. Gallery hours run Monday through Thursday and Saturday from noon to 5 p.m.