Movie theaters eviscerated by the pandemic 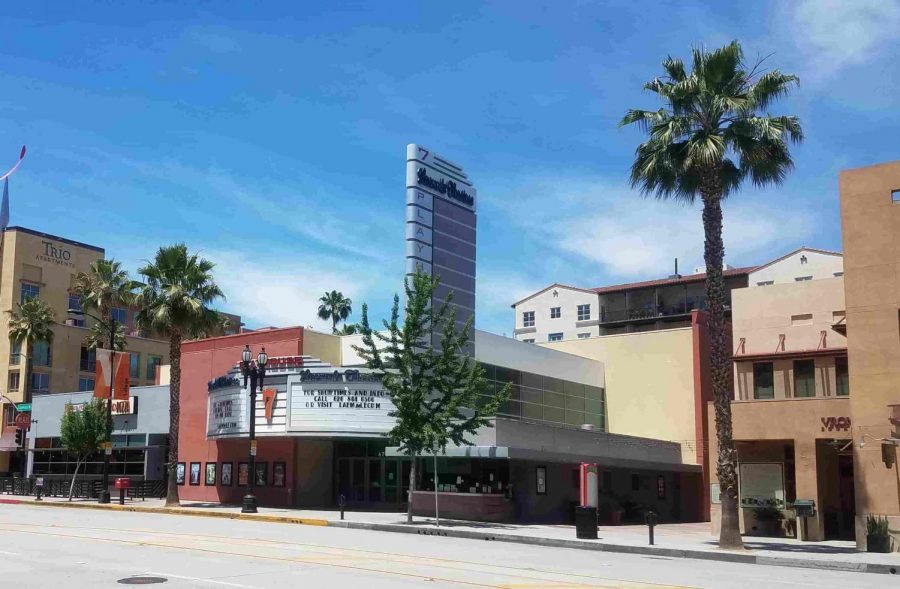 Throughout the Los Angeles area, theaters like this one in Pasadena are closed amid the coronavirus outbreak. (Ethan Axtell/UT)

Since the rapid expansion of the coronavirus pandemic and the subsequent quarantine, the American economy has sustained immense damage, with virtually no sector being spared.

The film industry, and specifically, movie theaters, have been essentially decommissioned temporarily in the interest of social distancing. The number of films released to theaters dropped 96 percent from 143 that were screened in March to six last month, according to a University Times analysis of domestic box office data from Box Office Mojo by IMDBPro.

Experts say the pandemic could forever change the film and entertainment industry and the relationship between theaters and studios.

“The studios are learning with releases like the TROLLS sequel that they can do very well with certain titles, without a theatrical release,” Tom Nunan, a UCLA graduate program lecturer at the School of Theater, Film and TV, said, adding that studios typically split half the revenue from screenings with theater owners while they get 80 percent or more of the profits when a title is released on premium video-on-demand. “I suspect the business models must change between studios and exhibitors.”

As revenue from studios to theaters declines, theater employees will likely continue to be affected. Southern California is no exception to this development and countless theaters have been shut down, leaving their employees without work.

“For workers in the theater industry, like any industry that’s affected harshly — sporting events, restaurants, other “gig” economies, it’s heartbreaking and genuinely awful when a business shuts down altogether and remains so, indefinitely. These employees rarely have health insurance, are usually working more than one job and are generally living day to day, let alone week to week or month to month,” Nunan said. “Just like in the Great Depression, these workers will be hit the hardest and suffer the longest.”

“Within a week of the virus outbreak reaching California, we were restricting drink and popcorn refills as well as implementing a routine of sanitizing all stations used by guests at a much more frequent rate. This meant, sanitizing [the] ticket podium, seat selection computers, trash cans, and condiment stands every 15 minutes,” said Townsend. “Also, within three weeks of the virus in California, the theater closed completely. The first two weeks we were still paid, however, it just wasn’t feasible to continue paying the numerous employees with no revenue coming in.”

Townsend added that her theater alone has been forced to furlough well over 150 employees, most of which can apply for unemployment.

In addition to losing her job at the theater, she also lost her other part-time job and now takes unemployment. She said that being a computer science major made the transition to online instruction smooth, but coping with quarantine conditions is still a challenge.

“I’ve found that even with excess time to complete everything I need to, focusing on class has become increasingly more difficult. It’s difficult to keep my attention stimulated through seven hours of class every Saturday morning. It’s definitely testing me,” said Townsend.

Theater employees speak in movie analogies and Townsend is no different. She said that she is keeping herself from going insane “like Jack Torrance from ‘The Shining’” by running five miles each day.

“As a theater employee with so many coworkers, you’re always used to being social and interacting with each other and that’s definitely changed,” Jackson said. “Also, being able to hear about all the upcoming movies that are dropping: Now, you can’t even look online or on the TV and hear about the new films because nothing is being released.”

Being stuck indoors has been an adjustment and he worries about the future.

One question is “just being confident in actually being able to go back to my job,” he said. “With all these delayed closures, businesses are losing a lot of money so it gets you worried they can’t even afford to have you back when they do decide to open.”

He’s also concerned about the state of the country and about folks who are struggling to pay their bills.

“The whole unemployment system is being overwhelmed right now and there needs to be more resources available to people,” said Jackson, “People shouldn’t have to wait weeks to receive money that’s going to feed their family or keep a roof over their head.”

Jackson has noticed a silver lining in his situation since the quarantine: Now, he and his family have an opportunity to spend more quality time together.

“As a family we’ve really had time to interact with each other more. Before this we were all [so] busy with our day-to-day schedules that we never had much time to spend it together, honestly,” he said.

“We definitely miss our teammates and can’t wait until we can be back together again,” Jessica Reeves, Harkins’ director of marketing, said in an email to the University Times.

She referenced a Facebook post in March for more details. In it, Harkins Theatres President Mike Bowers explained how the theaters were temporarily suspending operations.

“We are profoundly grateful for the loyalty and support you have shown us throughout the years, and especially now,” Bowers said. “Our hope is for everyone to stay safe, be kind and show grace at this time.”