OPINION: 10 things society should know about rape culture and how survivors can seek help 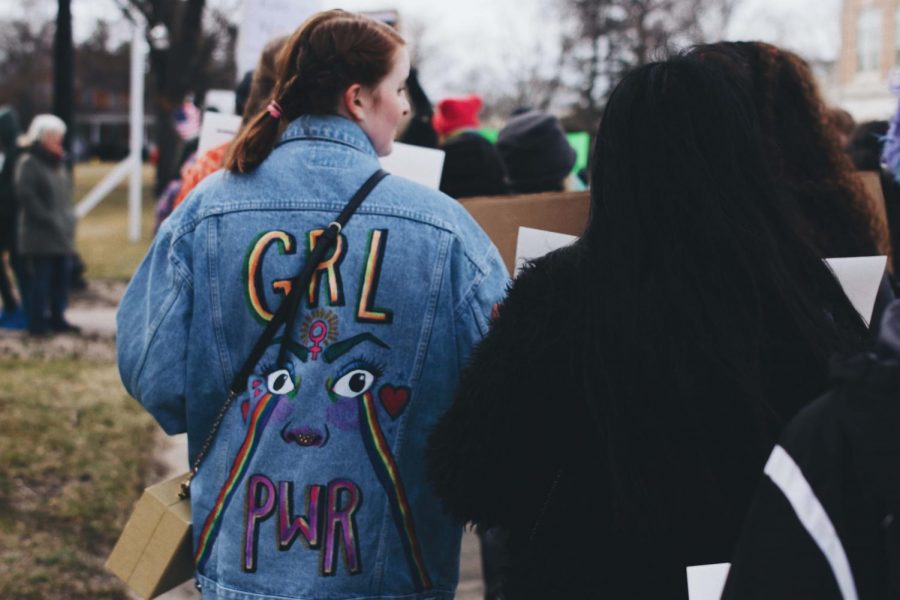 It’s time to whip out your favorite pair of jeans because today is Denim Day. “Denim Day” is an annual rape-prevention movement, where individuals wear a pair of denim jeans to show support for survivors of sexual assault. Official Denim Day Survivor Virtual rally is Wednesday, and is from 2 p.m. to 3 p.m. If you would like to join, you may RSVP here. The video of the event will be available for viewing on YouTube afterwards.

According to Peace Over Violence, the founding organization, Denim Day began in 1999 as a protest. In 1992, a 45-year-old man was sentenced to jail for the rape of an 18-year-old girl. Seven years later, the man appealed the conviction. It was taken all the way up to the Italian Supreme Court, where they overturned his conviction and ruled in his favor of his release. The Court’s statement said, “She had to help him remove them [jeans], and by removing the jeans it was no longer rape but consensual sex.”

In response, the women working in the Italian Parliament wore jeans to work to signify the absurdity of the court’s ruling. The protest eventually inspired many people around the world, and in 1999, Peace Over Violence held the very first “Denim Day.”

According to Virginia Garcia, P.R.E.A. & Gender Based Violence Program Manager, Denim Day is about “having those conversations that we’re uncomfortable to talk about.”

In the spirit of Denim Day, here are 10 things society should know about rape culture:

In order to understand how to change rape culture, we need to understand what it is. UN Women defines rape culture as “the social environment that allows sexual violence to be normalized and justified, fueled by the persistent gender inequalities and attitudes about gender and sexuality.” Until women are treated with respect and equality, rape will always be around. Media all around us sexualizes and objectifies women’s bodies, creating a notion that women’s bodies are for a man’s pleasure and something to be conquered. The music we listen to, the shows we watch, the ads we see on TV and movies we see tend to show women as objects, whose sole purpose is a man’s pleasure, which takes me to my next point.

“No” does not mean “Convince me.” “No” doesn’t mean “Maybe later on.” If you have to convince someone to have sex with you, you probably should not be having sex. Sex needs to be consensual for both parties to enjoy. “Consent is about mutual desire,” says DenimDayInfo.org. Sex should also not be pressured. Consent can also be withdrawn at any time. If an individual chooses to change their mind even though foreplay has already begun, that should be respected, no matter when it’s said.

Saying “her skirt was too short, she was probably asking for it,” only perpetuates the notion that it’s the victim’s fault and not the rapists. The only one responsible for rapes are the rapists themselves. No one else. We blame survivors for the rape more than we do the rapist.  People are often more concerned about what the survivor wore, whether or not they were drinking, or what the survivor told the perpetrator before the rape. “Victim blaming is an umbrella term that denotes any actions or words that suggest or state that a victim of a crime — in this case of sexual nature — is to blame for what happened to them,” according to DenimDayInfo.org. Being sexually assaulted is an already traumatic experience, but to add onto that trauma by invalidating a woman needs to stop. By victim blaming, we scare the survivor from reporting the crime. Only 230 out of 1,000 rapes are reported to authorities and only 4.3 rapists will be incarcerated, according to The Rape, Abuse & Incest National Network, an American nonprofit anti-sexual assault organization. It becomes difficult for survivors to tell authorities about their experiences when survivors are patronized and get asked what they did to cause it.

5. Rapists are rarely creepy, hooded strangers hiding in the dark.

Most of the time, survivors are raped by someone they know. “Of sexual abuse cases reported to law enforcement, 93% of juvenile victims knew the perpetrator,” according to RAINN. We normalize the act of rape when it is done by someone we know, because we’re so used to the idea of a rapist being a scary-looking person we see walking down the street. When this happens, we say: “What? They did what? No they didn’t. They don’t seem like that kind of person, they’ve always been nice to me.” Brock Turner was set free after three months in jail for raping an unconscious woman, possibly because he did not look like this scary person we were always told rapists look like. He was like anyone else; he was a student, an athlete and a son, he is now also a convicted rapist. But perhaps his athletic career was more important than his survivor’s justice, so that may have been why he was set free three months early. By allowing the rapist to walk freely, we are telling women that their traumatic experience is invalid and does not deserve justice. We are telling women that their life is not as important as their rapists’. That needs to stop immediately.

6. If someone is clearly intoxicated or unconscious, they cannot consent.

Though alcohol may not cause rape, it can play a factor in it. When someone has had a lot to drink, it becomes harder to communicate effectively. If a person cannot walk straight, speak properly, remain focused or does not have a clear and sound mind they are not in a position to have consensual sex.

7. Men can be sexually assaulted, too.

Many often think only women get raped, but that couldn’t be further from the truth. Statistics show 1 out of every 10 rape victims are male. By believing a man cannot be raped, we enforce the stereotype that men will always voluntarily have sex because that’s all they want and take away his chance at justice. We make men go through their traumatic experience alone because they are often ashamed of what happened. When a man rapes a man, he often loses his sense of manhood because society teaches us that men are supposed to be dominant, so there’s no way he can be sexually assaulted. Men can be raped too and in order to stop rape culture, we need to come to terms with this first.

8. Stop normalizing rape by teaching women how to protect themselves, and instead teach young children about consent.

If we taught children at a young age about consent and respecting everyone’s boundaries, girls would not have to grow up constantly being told to cover themselves up. Women are always told to lower their skirt. Wear looser clothes. Wear longer dresses, ect., but how often do we take the time to sit down and teach our children about consent and what it means? Society tells women to cover up more than it tells people not to rape.

9. Sexual abuse doesn’t necessarily mean rape, but it can contribute to rape culture

Sexual abuse isn’t rape, but can still lead to someone feeling uncomfortable. You can make someone feel uncomfortable with continuous sexual advances, catcalling, flashing/exposing yourself, sending unwanted pictures of genitalia, unwelcome touching, etc. We’ve normalized this behavior because it happens so often, but we forget by normalizing this, we allow individuals who do this to keep doing this. It contributes to women being objectified, and it contributes to the notion that women are there for a man’s pleasure.

10. Stop saying “boys will be boys” and “he does that because he likes you”

By saying “boys will be boys,” we give men the excuse to act in an unbehaved manner and write it off as typical men’s behavior. Saying this perpetuates what is expected of boys, and that it is okay to be aggressive because it’s “boys will be boys.” You are excusing boys from their aggressive behavior instead of teaching them how to respect those around him. We let his actions go without consequence. Telling girls “he does that because he likes you” tells her that when a man is violent with you, it is because he loves you. Men have mouths, if they like you, they can express their feelings. Stop telling girls a way boys show affection is through violence. It instills this mindset that if in an abusive relationship, he abuses you because he loves you and he just doesn’t know how to express his emotions.

Sexual violence is a heavy topic to discuss, but that doesn’t mean there aren’t people out there that aren’t willing to talk. In fact, there are plenty of people willing to talk about it. Peace Over Violence is a non-profit “sexual and domestic violence, intimate partner stalking, child abuse and youth violence prevention center” that works to build “healthy relationships, families and communities free from sexual, domestic and interpersonal violence,” according to their website.

POV started with six women and now have a staff of over 50 and over 200 volunteers that are manning their hotlines. Their services are confidential and free. “We tailor each specific case to that need,” says Garcia. “We meet survivors where they’re at… Our role is not to judge, but rather to empower them and to help them find options that are appropriate for them.” POV offers court accompaniments, filing for divorce, immigration, child support, counseling, self-defense classes, support groups for sexual assault and domestic violence, etc. If you would like to volunteer, donate or find yourself needing any of their services, you can always go to their website, or call one of their hotlines:

POV also offers services on campus. Maxine Estrada is a domestic violence case manager, and is on campus as a sexual assault advocate, so her services extend to anything involving crisis intervention to talking to students about their experience. She is also there to provide students with resources, safety planning for survivors, help them stay grounded by teaching them breathing techniques, and teach ways to help them come down from the crisis that they’re in.

With lock down and “stay at home” orders in place in light of COVID-19, reported sexual assault and domestic violence cases have decreased, but that isn’t an indication that people are free from harm’s way. It could mean that the survivor is stuck in an environment with their perpetrator and can’t seek help.

“It’s important that we do this because we want to let people know that [POV] are still available to help them and we still have services that they can utilize and they can still make a report if they want to and if they don’t want to they can reach out and get any assistance for their situation. That expands to teens, students, the LGTBQ community, anyone that is stuck at home where their environment is not necessarily a safe environment,” said Estrada.