Opinion: Hearing out Sanders’ supporters and other voices on Twitter can be exhausting but enlightening 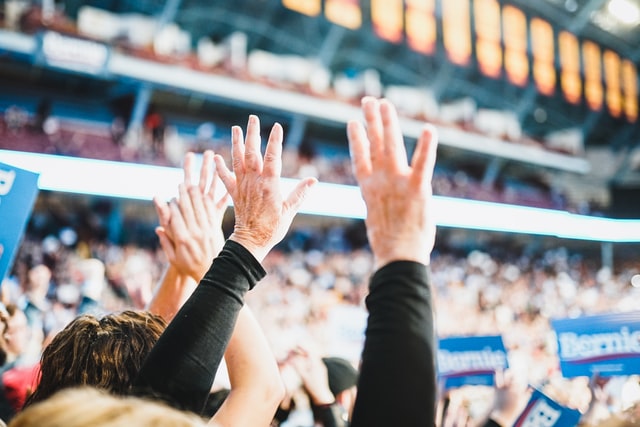 Bernie supporters still want to have sway in the presidential campaign. (Photo by Parker Johnson on Unsplash)

Looking for elevated and articulate political discourse on Twitter is like searching for Michelin Star cuisine in a dumpster, guided only by your tongue. You’ll never find what you’re looking for but you just might discover what people are eating.

In other words, you might not find brilliant political insight on Twitter but you may introduce your tongue to the unsanitized and distinct flavor of the zeitgeist.

Sen. Bernie Sanders dropped out of the race for the Democratic Presidential Nomination last week as he trailed former Vice President Joe Biden by more than 300 delegates.

On March 10, several primaries were held and Biden extended his lead that evening. Consequently, a few hashtags expressing the belief that Sanders should depart from the race were trending.

Of course, plenty of his supporters were standing firm as well. The movement and preferences of Sanders supporters interested me, as they represent a significant portion of democratic voters.

So, late last month, I posted two Twitter polls in an attempt to illuminate my understanding of how Sanders’ supporters feel about the race and about specific political issues.

The turnout for my polls was even more pathetic than the youth vote in the last few major election cycles.

The first poll conjured up five votes while the second could only scrounge a pitiful three.

Based on the laughable sample size, there is no point in sharing the results.

In recent weeks, sexual assault allegations have been levied against Biden. That and the disparity in policy prescriptions offered by Biden and Sanders on the issue of the coronavirus, had seemed to render Sanders’ supporters active and resolute on Twitter.

As I waited for votes that would never materialize, I noticed hashtags such as #UnEndorseBiden and #BlueMAGA, which were mentioned in a combined 950 tweets as of Tuesday afternoon, according to TweetBinder.

Since then, hashtags related to the HBO show, “Insecure,” Sean “P. Diddy” Combs, and “Tiger King” Joe Exotic have been trending. The dumpster that is Twitter is never empty.

Nonetheless, my quest for substantive information on Sanders led me to posts peppered with the energetic yelps of socialists. On a few occasions, I even engaged passionate Sanders acolytes.

One memorable instance was when I responded to an emphatic Sanders’ supporter on Twitter who had just outlined how dire she believed the current political moment to be. I dropped a cynical brick of a reply and not long after, a scrappy Sanders true believer fired off a spirited but uninspired attack on my point.

Since I am a well mannered simian, I opted not to respond to the jabs, though I could not prevent my account from alerting me of all the seemingly countless “likes” the response generated — whereas my initial master stroke of a response received little support.

On several occasions, I have observed that Sanders’ supporters online seem to operate within an echo chamber, often patting each other on the back and basking in self-righteous moral superiority.

However, what interests me the most about Sanders’ supporters are not the venomous ghouls, screeching hippies, or tone-deaf celebrities. What interests and impresses me are the articulate and vulnerable voices of Americans that are forgotten, ignored or exploited by the current political system.

The voices of passionate Sanders’ supporters who just point to inequities in our current political climate and speak from the heart about the struggles they have endured under various administrations. Voices who want and need change, voices that deserve attention. Voices that have illuminated real and relevant details about the sordid history of Sanders’ rival, Biden.

Bottomline, Sanders’ supporters will play a massive role in determining who will lead our nation for the next four years. What they do matters, so if you do not fancy burrowing your head in the increasingly dry and pesticide-laden sand, you should keep an eye on them.