My reason why: How I became homeless and faced the worst night of my life 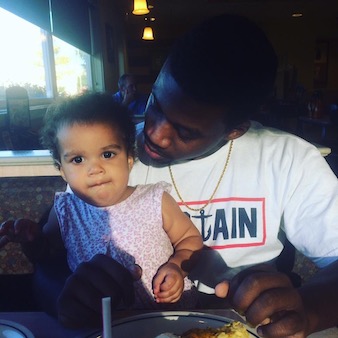 Some of the toughest battles I have faced in life came from within: Not feeling accepted, doubting my self-worth, feeling angry and depressed. It all seemed to hit me at once in a series of unfortunate events.

The birth of my daughter, Evelynn, is by far the greatest blessing in my life, though my relationship with her mother is the complete opposite. A lack of trust, constant fighting, and various forms of abuse eventually led us to separate shortly after Evelynn’s birth.

Her mother is a Marine as well, and once her contract ended, she moved across the country to Texas — which was unknown to me until two years ago. Without hearing anything from them for a long time and my family being on the other side of the country in California, I felt completely alone.

At this point, being alone in a city I had only lived in for a few years, I decided to improve my situation without asking for help. I had always asked my parents for help in the past when I felt I needed it, and they felt that was the only time I reached out to them while I was on my own. So, I was determined to show them that I could make it on my own.

I had a roommate at the time in a two-bedroom apartment and was shuffling between minimum-wage jobs. The money that I was bringing in wasn’t much, and definitely not enough to take care of myself each month while paying my portion of the rent.

My roommate, an active-duty Marine himself, was very flexible with me, understanding my situation. But I could tell that his girlfriend didn’t feel the same way.

After a few months of giving whatever I could to help out, the small amounts were not enough. My roommate’s girlfriend started an argument with him about me staying — while I was there to hear it.

I was more focused on defending him than explaining myself to her until she started to attack me personally. As she called me racial slurs and insulted me as a father, I kept my calm, making her even more infuriated with me.

We were arguing in the kitchen at that point and she pulled out knives from the drawer and started throwing them at me.

Thankfully, none hit me. I didn’t know where to go but I knew I wasn’t staying there. I packed up the few things I had and left that night to never hear from either of them again.

I put everything in my car and slept in the Jacksonville Mall parking lot on Western Blvd. A couple of days after that, I had lost my part-time job at Planet Fitness. The parking lot had become my new home and I was no longer making money.

During the day, I would go into the mall to use the wifi and look for a new job. Surviving off of what I saved for about a week, that came to an end when I walked outside to see my car had been repossessed for missed payments.

Now, I was really left with nothing but the clothes on my back.

I would walk to a plasma donation center that was maybe four miles away from the mall  — and do that twice a week, three weeks a month, to make $40-$60 a week from donating.

I went so often, I still have the scar on my arm from where they drew my blood. With the little money I made from that, I survived off eating $2 grilled chicken wraps and a small order of fries with water from Wendy’s.

One day in the mall, my new “home,” I ran into my friend D.A., who looked out for me because we had played on the same semi-pro football team a year or so prior.

I explained my situation to him and he immediately took me in, offering me a place to stay in his apartment. He even took me to the impound lot where my car was to get some of my belongings.

After almost four months of living in the mall parking lot, I finally had a place to go to and began getting my life on the right track.

Since it was a one-bedroom apartment, I didn’t want to take up too much space so I kept my few belongings in the living room. An inflatable bed, one basket of clothes, and a gym bag all sat with me in the corner of the room, not far from the front door.

Things were slowly improving while staying with my new roommate — or so I thought.

“Alright bro, I’ll be right back,” was the last thing my roommate said to me that Friday, Nov. 10, 2017, before going on a late-night food run with friends.

I nodded as he left the apartment with three other people, and continued to listen to the soothing R&B song, “Time,” by Snoh Aalegra on repeat while the music took me back to memories of my daughter.

My roommate was a stickler for rules, one of his biggest being to always lock the door, whether you are entering or leaving. No matter what.

Understanding his reasoning behind this rule — the area we lived in was not the safest — I always made sure the door was locked.

But with me staying in that night while the others went out quickly, I don’t think my roommate felt it was necessary to lock the door and I never thought to check.

With music playing in my headphones, a song that brought me peace in a time in my life when I felt everything was falling apart, I drifted away into a world of calm.

I was quickly brought back to reality when I felt something push against the back of my head. Through the darkness in the room, I could see a chrome pistol pointed directly at my forehead, inches away from my face.

I saw a masked man yelling instructions at me, and felt a hard slap on the back of my head. As my headphones flew out of my ears from the hit, I heard a loud ringing followed by even louder instructions.

“Where’s the money!?” the man kept shouting until I came out of shock enough to realize what was happening.

My lack of response only seemed to upset them more, as they dragged me down the hallway to the bedroom.

“Open the door, or you’ll die right here,” one of them said.

My roommate’s bedroom door was locked but I knew he kept a knife above the door to open it.

I frantically opened the door, explaining to three men with guns pointed at me that I didn’t know where anything was. It wasn’t my home.

Two men continued searching the house while one of them stayed behind and beat me in the face and body with a rifle.

My fear grew by the second. I had nothing valuable to offer them.

I could hear the men talking to each other, infuriated that they had yet to find what they were looking for. Then they started to debate what to do with me.

One said, “Get in the corner, on your knees, facing the wall. Look at me again and they’ll have to scrape you off the wall.”

At this point, I realized these were my last moments. I prayed, asking for strength and protection for my daughter. She and my mom were the only things on my mind.

I looked up one more time to see the person who was going to take my life. As I did, I was hit above the eye with the butt of the rifle. Before I could be struck again, we heard someone at the front door.

They stopped and quietly listened.

The lights in the apartment turned on, my roommate noticed the destruction of the living room and proceeded carefully down the hallway.

As he turned a corner, one of the men was there waiting for him.

He beat my roommate repeatedly with the rifle, so hard that bullets were falling out. At that point, I could tell that they knew who he was. They were there for whatever he had.

Seeing the bullets flying out of the rifle from the blows to my friend put a fear in me I have never experienced before and I understood at that moment that they could have killed me when they first walked in and I would have never known.

The three men eventually found what they were looking for, but decided that wasn’t enough. Almost everything I owned was taken as well: my few clothes, my phone,  the air mattress, and gym bag, and all the pictures I had of my daughter.

After the police came and did their report of the crime, my roommate and I agreed that it wasn’t safe to stay there for a while. He reached out to a family he knew, and thankfully, they took us in for a week or so.

While there, I used the family’s wifi and iPad to reach out to my brother and let him know what had just happened to me and that I was OK.

He told me that our dad was coming that week to get me out of North Carolina. He arrived on a flight days later, paid over $2,000 to get my car back, and we drove it to California in the next four days.

I am convinced that my parents saved my life. I would not be here right now without them.

That experience changed my life forever.

I remember going to the movies with my brother and his wife shortly after being in California and I couldn’t enjoy it at all; I was so paranoid and traumatized from the event that I was more worried about the people sitting behind me than watching the movie.

I still have dreams of that day and dreams of being shot and killed, especially around this time of year.

I honestly don’t think that is something I will ever be able to completely recover from mentally. The images are too vivid in my mind. My photographic memory is a gift and a curse. I can still see the light eyes of the first masked man and the dreadlocks of the man with the rifle. I remember my eyes crossing from staring down the barrel and the shine of the laser pointing at me. The blue gloves they wore that you see at the doctor’s office are all images ingrained in my mind forever.

I felt like I had lost everything and was ready to give up. However, that same moment that I thought would be my last became the moment that taught me not to take this life I have for granted.

I believe to this day that I am on this Earth for a reason. I believe that is the only reason I survived that night five years ago. Surviving not only that night but everything that led up to that point, told me that I have a purpose in this life. I’m not sure if I have found what that exact purpose is yet but I know it is going to be something special and I can’t wait.

Reflecting on those moments in my life is what helps me write. It pushes me through each day to be the best that I can. A moment in which I was sure I was going to die has now become the reason why I live.