The day that changed my life, maybe forever 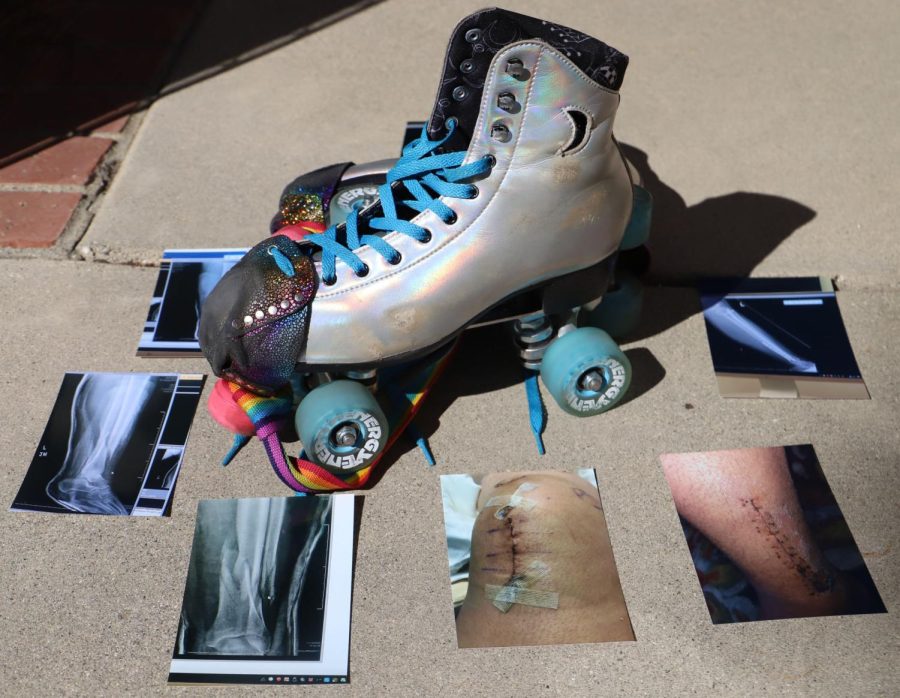 Photo illustration: A pair of roller skates represent the fun that led to a dark time for Victoria Ivie. (Victoria Ivie/UT)

I will never forget the color of the sky that day: A vivid blue flecked with clouds.

It was a slightly cool day Nov. 18, 2020, at the outdoor skatepark my friend and I frequented.

But on this day, instead of doing circles around the rink swaying to the music, as usual, I was on my back staring at the sky, tears streaming down my face.

I will never forget the sky that morning because that is what I stared at for ten minutes while waiting for the ambulance to take me to the nearest hospital.

That is the day I broke my leg.

I took up skating as one of my pandemic hobbies with my friends. Despite having broken my thumb the month before by catching myself on a stone bench, I didn’t have any fear that I would get hurt roller skating aside from some bruises. I went to every skate session with knee and elbow pads and wrist guards, and I never tried anything too advanced.

With those precautions, I thought I was invincible.

The moment I fell, I knew something was horribly awry.

I was in the big skate bowl at Monrovia skatepark, not doing any tricks but going around the flat base of the bowl — something I’d done a million times before.

I suddenly fell backwards. I fell with my left leg under me and my whole body slammed down on it. I was dazed and when I moved my leg out from under me, it felt as though moving a limp noodle.

I called my mom before dialing 911.

“I fucked up,” I constantly repeated to her.

In my state of shock, I thought she would be mad at me and blame me for taking up roller skating. It was all I could think about.

Once the ambulance took me to Arcadia Methodist, things only got worse.

When I was wheeled in, the doctor, without having taken any X-Rays, said, “It doesn’t look broken.”

Perhaps because I was a woman or because I was fat, they viewed me as exaggerating about how serious my injury was. Despite calls and emails, a spokesperson for the hospital could not be reached.

Thankfully, I was told I’d be moved to a different hospital. The new EMTs moved me from bed to gurney with such ease that the nurse saw me off remarked on it, saying she was surprised because the other EMTs seemed to struggle to bring me in.

In the ambulance to transfer me to my insurance’s hospital, I found out I had broken the two major bones in my leg (the tibia and fibula) and would need surgery as soon as possible.

Having a serious injury during a pandemic is the scariest thing I’ve been through.

I worried the whole time I would get COVID and bring it home to my elderly grandfather. I wasn’t allowed any visitors. I would be going under anesthesia for the first time. I was in the worst pain I’d ever felt in my life and I considered myself to have a high pain tolerance.

I was extremely lucky to still be on my mom’s great insurance plan. While I did worry quite a bit about how much everything would cost while in the hospital, I knew it would be nothing compared to if I wasn’t insured.

I was irrationally paranoid that when I went under for surgery, I wouldn’t wake up. The thought of never saying goodbye to my family in person and dying during my surgery had me shaking and crying on my way in. Luckily, all went well and I left with a rod, a steel plate, and a lot of screws.

The doctor later told me the screws were the only thing holding my fibula together.

The two weeks of bed rest following my surgery was the most depressed I have ever been. I cried every single day. I missed my birthday and Christmas, my favorite time of the year. Because of the pain and the size of my shower, I couldn’t even wash my own hair. My mom had to wash and rinse it for me while I sat in a chair outside.

I recall these days and many months after as extremely bleak. When I wasn’t sleeping the day away, I was crying or taking a seemingly endless rotation of pain medicine and daily blood thinner shots to avoid a blood clot from lack of circulation in my leg.

I had to relearn how to walk and attended physical therapy for seven months, going from wheelchair to walker to cane to finally walking without assistance — although much slower than before.

This month marks one year since breaking my leg. My scars are healing really well. I am finished with physical therapy and am back at work with accommodations.

I still struggle to walk, my leg still hurts and I still have nerve damage that my doctor says could be permanent or not, “only time will tell.”

I had to come to terms with my own ableist thoughts I didn’t even know I had, along with becoming handicapped in an ableist world. Before going anywhere or doing anything I have to assess whether I can walk or stand long enough to handle it, whether they have elevators if they have seating for me to rest when needed. The list feels never-ending of things to worry about and plan for.

At one point about eight months ago, I rarely left the house and if I went grocery shopping, I could only go to big stores that provided electric scooters so there was space to hold my groceries. I considered Costco and Sam’s Club to be the holy grail of disabled shopping since I’ve never once seen a shortage of electric scooters and they have big open aisles that I never had an issue navigating through.

That was until one day I was leaving Sam’s Club.

“What are you doing on that scooter?” an employee asked me in an accusatory tone.

Perhaps for some disabled people, they’d prefer to be asked about their disabilities, but it was early on in my recovery and I had not yet been in therapy. I could not walk more than two or three steps without assistance.

I don’t remember what I replied but I know I left feeling like shit and sobbed in the car.

I couldn’t even mentally deal with the trauma to my body that I had endured and her question made me relive my trauma all over again. I felt disrespected being asked and felt like she was asking me what right I had to an accommodation.

I am self-conscious of my limitations especially now that I am able to walk (as long as it’s not too far or for too long) since my disability is more invisible to others.

I didn’t work and was on state disability for around seven months because I work retail, a job that typically requires being on your feet all day and walking a lot.

I can’t go on ladders, carry more than 20 pounds, and, at the time of going back to work, could only stand for 30 minutes at most. Luckily, my job was able to provide me with accommodations like using a stool to sit and not doing ladder work.

My co-workers have all chipped in to help me as much as they can during my shifts, which I’m grateful for.

I suffer from PTSD and increased and extreme anxiety from my accident. I had no idea you could even get PTSD from breaking a bone.

Having broken my arm twice as a kid and not having many problems, I was extremely unprepared for just how much this injury would affect my daily life.

I get extremely anxious over the thought of falling, every time I take a shower, go down the stairs or walk on a slightly uneven surface, I worry and have flashbacks to when I fell and broke my leg.

I can see everything so clearly; the flashbacks often feel as if I’m back to that day. I’ve had many panic attacks over the past year.

Starting at a new college during this time did not help my anxiety. I had to worry about finding accessible parking, how far that would be, where the elevators in each building were, and if I would be in pain.

For one of my journalism technology classes, we did a tour of the building, which sucked for me considering the elevators were on the whole other side of the building and we were doing the tour as a group. I felt extremely self-conscious going down the stairs so slowly with everyone behind me and did not want to take the elevator in case I got lost or separated from the whole group.

Even as I consider journalism as a career, I worry about how I will be able to do fieldwork as effectively. I was supposed to apply for internships in the summer of this year but I felt I had to put everything on hold because my recovery timeline was so up in the air. My life in general feels like it has been on a bit of a pause to focus on my recovery.

Months into my recovery, I had to seek out professional help for my mental health. This helped tremendously by giving me tools to look at situations (related to my injury) with a more neutral perspective and not automatically go to the worst thought.

My therapist also practiced Cognitive Behavior Therapy on me, which is used to lessen the impact and negative feels that come with my vivid PTSD flashbacks.

I slipped on the last stair at my house a few weeks ago and fell onto the middle landing. I was fine besides my initial adrenaline rush but if that would’ve happened three months ago, I would have been in a full-blown panic.

Without therapy and the support of my friends and family every step of the way, I don’t know where I would be right now.

My fear has always been that this will affect the way I walk and my ability for the rest of my life. Only time will tell.