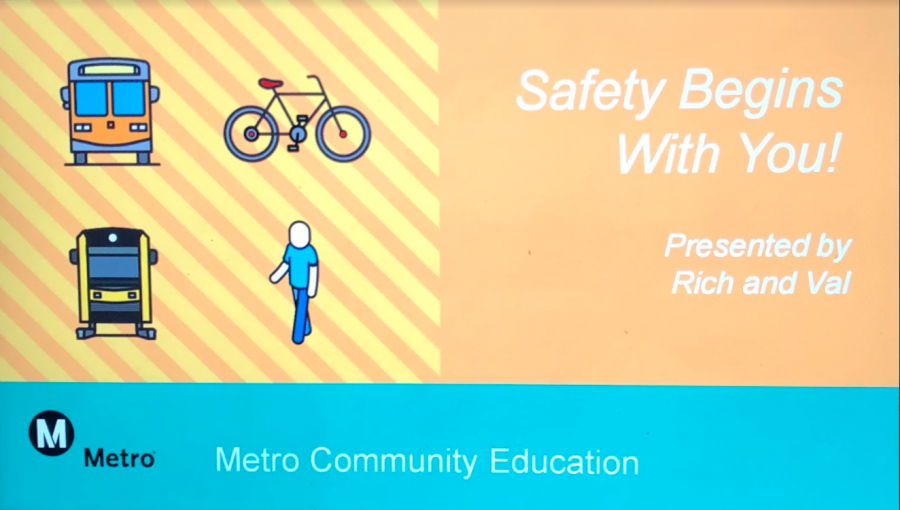 Despite its ridership declining by more than half, due to the coronavirus pandemic and related closures, LA Metro buses and trains are still chugging along.

Data from LA Metro shows that total boardings for January are typically over 30 million.

“Now with the pandemic, that…has gone down to [over] 13 million,” said Richard Morallo, a community relation manager with LA Metro.

Morallo and Valarie Harrison-Boyer, another community relations manager, presented a webinar about what Metro is doing to encourage safety. That includes:

Limiting capacity. Metro has limited the number of passengers on its buses to enforce social distancing. For instance, Metro lowered the capacity of the typical orange bus from 40 to 30 people and the typical red bus from 57 to 42.

Morallo explained that if a bus is too full, operators will pass people waiting at the bus stop and send for another bus.

Installing copper fixtures. Metro is also looking into installing copper parts in their buses and trains to coat high-touch areas such as windows, handles, seats, and the entrance doors, according to the Metrolink website. Copper is known to kill viruses.

Filtering the air and cleaning surfaces. Metro has a filtration system that clarifies the air inside trains and buses. Metro employees also do “vigorous” daily cleanings on both buses and trains, according to Morello.

Encouraging people to wear a mask. There are signs at the entrances of buses and trains reminding riders to wear masks and passengers are asked to spread out and maintain social distance.

That doesn’t mean all goes as planned.

“What if a rider refuses to wear their mask?” asked Robert Diaz, who is the secretary of neighborhood council and organized the event.

Morallo said that a passenger without a mask would be able to board the bus because the bus operator is “only responsible for providing and operating that bus” but when Metro does its regular monitoring of passengers, it has found that almost all wear masks.

Metro has also made changes to increase efficiencies of its services with the reduced community need. For instance, some Metro transit would come every seven minutes before the pandemic but with fewer riders, that has been increased to 12 minutes.

Morallo said that even with the decrease in ridership, law enforcement officers are out patrolling on trains, buses and platforms.

Just as ridership is down for the Metro during the pandemic, so is engagement in events like the Highland Park meeting: The Metro officials, a reporter, and Diaz, the Highland Park council member were the only ones there.

“The turn out was disappointing…I think if webinars were more available weekly then I think there would be a higher turn out,” said Diaz, who scheduled the meeting based on Metro’s appearance at another board meeting. “I think Metro is so important on many levels to Los Angeles climate and traffic. It really ought to be used by everyone, all economic backgrounds and races.”